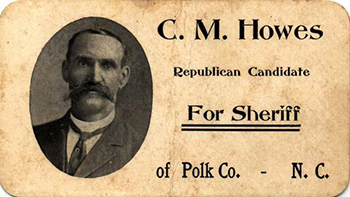 Sheriff is the oldest public office in North Carolina. Established in 1662, the office is rooted in English history before the time of the Norman conquest of England. A sheriff appeared in America in Virginia as early as 1634 and in Massachusetts in 1691. On 9 Oct. 1662 the General Court of Virginia issued a commission to Capt. Samuel Stephens to be "Commander of the Southern Plantation" and authorized him to appoint a sheriff of that region, then part of Virginia. It later became North Carolina.

The sheriff often had to do whatever was necessary for the county's judicial and administrative government, a responsibility that made him a powerful person. Even when his office was conducted in strictest honesty, the sheriff was one of the highest-paid officials in the colonial government. His income came from several sources: fees for executing orders of the court, including warrants, civil papers, and attachments; commissions on collected taxes; a salary paid by the colony; a salary paid by the county for "extraordinary expenses" in performing services for which the legislature permitted no fees; commissions on the sale of estates for which he acted as executor; and other miscellaneous fees.

The sheriff became the chief law enforcement officer in the county. Under other provisions of an 1829 law, each county was subdivided into captain's districts for military purposes. The county court appointed a patrol committee of three for each district, which functioned under the sheriff. Sheriffs, elected to two-year terms, continued through the Civil War. A sheriff's duties, which remained much the same over the decades, included enforcing the criminal law, overseeing the civil process, and executing all court processes. A sheriff also served as bailiff to the court, maintained the county jail, and oversaw the collection of taxes and fees owed the county and state. The North Carolina Constitution of 1868 continued the office of sheriff but did remove the old county court of justices of the peace and establish commissioners to set policy for the administration of county government.

With Great Britain's Metropolitan Police Act of the 1850s, law enforcement began to professionalize and sheriffs were quick to take the lead in North Carolina. By the turn of the century, the state's sheriffs had begun to work for better training and equipment for themselves and their deputies. The early 1900s saw the introduction of such innovations as the use of the automobile and the radio in law enforcement, but many counties, with tight fiscal control, were slow to adequately fund their sheriffs. In the 1920s state official and academician Albert Coates began extensive teaching of law enforcement officers. Working in conjunction with the North Carolina Sheriffs' Association, other law enforcement groups, and municipal and county governments, Coates eventually established the Institute of Government at the University of North Carolina in Chapel Hill. His vision resulted in the modern exhaustive training and certification criteria for deputies and other law enforcement personnel.

The office of sheriff has remained virtually unchanged throughout the decades. The sheriff retains the duties of bailiff, jailer, executive officer of the court, and "keeper of the county." The second paragraph of the sheriff's oath of office remains almost intact from that which was prescribed in 1738. One change has occurred: starting in the 1940s, county commissioners began appointing separate tax collectors-although at least one North Carolina sheriff remained the county tax collector in the early 2000s.

Martin, François-Xavier. A treatise on the powers and duties of a sheriff: according to the law of North-Carolina. Newbern [N.C.]: J.C. Sims. 1806.