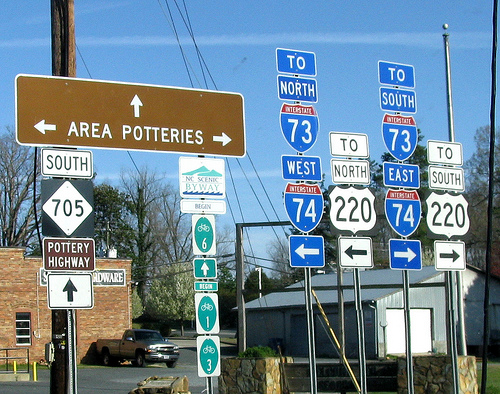 One of the major factors associated with North Carolina or any state’s growth and prosperity is its transportation system. The efficient movement of people and freight is a vital element of a state’s current economic well being and its further development. A coordinated effort needs to be made by state and local agencies in order to ensure that all parts of the transportation system are maintained in good condition. Each part of the overall transportation system must be integrated with the other parts. Each part of the system is important in that it provides accessibility and mobility to meet personal travel requirements, or the need to transport various types of freight.

The components of the transportation system described in this chapter include highways, waterways, air travel, and the rail system. North Carolina’s highway system is notable for its beautiful scenery, which has been enhanced by the state’s anti-littering Adopt-A-Highway Program, one of the largest such efforts in the nation. The North Carolina Department of Transportation’s Wildflower Program, which began in 1985, turns roadsides into rainbows with its wildflower plantings.

Vehicles that use the highway system include, of course, personally owned vehicles (POVs), but also trucks, buses and other larger vehicles to accommodate passenger travel and freight. Street and highway systems are also experiencing a growing demand to more safely and conveniently accommodate bicycle and pedestrian travel. These “highway modes” are covered in the sub-section of this chapter called “The Highway System.”

Following the section on the highway system, trends and other facts concerning marine transportation (water), travel, air travel, and the rail system will be described, and the chapter concludes with a look at the future. North Carolina is, of course, the birthplace of modern aviation since the Wright brothers’ first flight at Kill Devil Hills. According to the North Carolina Department of Transportation, more than 47 million passengers fly to and from North Carolina’s 72 publicly-owned airports and nearly 300 privately-owned airports each year, and more than 800 million pounds of air freight originate annually here.

North Carolina railroads operate more than 3,600 miles of track. The state has two Class I and 21 shortline railroads. Two types of trains operate in North Carolina, passenger trains and freight trains. The North Carolina Department of Transportation and Amtrak jointly operate two passenger trains, the "Carolinian" and "Piedmont". The “Carolinian” provides daily roundtrip service between Charlotte and New York City, while the “Piedmont” goes from Raleigh to Charlotte and back daily. On the water, Wilmington and Morehead City are the major ports. According to the North Carolina State Ports Authority, the Port of Wilmington served 362 ships and the Port of Morehead City served 118 ships and 415 barges in 2009.