North Carolina is one of a handful of states that have no county highway departments. Those roadways in about 41 of the states that are maintained by county highway departments are instead a part of the state-maintained system in the Tarheel State, where they are called “secondary roads.” The North Carolina Highway Department (North Carolina Department of Transportation) took over all county roads in the 1930s, in order to have greater leverage with vendors and suppliers of the materials necessary to more economically build and maintain highways.

Currently, with about 80,000 miles of state-owned and maintained highways, North Carolina has one of the two largest state-owned and maintained highway systems in the country. In North Carolina, municipalities maintain an additional 21,000 miles of city streets, and combining these two administrative systems with highways maintained by other agencies such as the National Park Service or the U.S. Forest Service, the state contains approximately 105,000 miles of roads and highways. Ferry crossings of several rivers and sounds connect links of the highway system in many coastal counties. Ferries are operated by the State Ferry Division, also in the North Carolina Department of Transportation. The state highway system is shown in Figure 1.

One statistic used frequently as a measure of highway usage is Vehicle Miles Traveled (VMT), usually expressed on a daily or annual basis. VMT is not an actual measure, however. Daily VMTs on individual segments of both state-maintained highways and municipal streets are typically estimated by periodic or continuous traffic counts. On an annual basis, a statewide estimate of VMT for each county is a combination of these site-specific traffic counts and an estimate developed by the North Carolina Department of Revenue based on tax collections from motor vehicle fuel sales; the size and composition of the vehicle fleets, both public and private; and averages of miles per gallon for various types of vehicles. Trends in VMT on individual highway segments, by county, and for the state as a whole, are therefore useful as a measure of the growth of highway travel over time.

Comparing VMT for 2003 and 2007 (Figures 2 and 3), most counties in the state experienced slight percentage increases in the four-year period (Figure 4), though thirteen counties experienced decreases. Note that in Figures 2 and 3, miles traveled are shown as units of 100 Million Vehicle Miles Traveled (or 100 MVMT). For example, 2003 data (Figure 2) show that Alamance County experienced between 6.0 and 16.99 hundred MVMT that year. The actual estimate that Alamance County experienced was 14.43 hundred MVMT traveled in 2003. In 2007, Alamance County had 15.81 hundred MVMT, and the legend shows, again, between 6.0 and 16.99 hundred MVMT. Figure 4 shows that county with a zero and 9.99 percent increase from 2003 to 2007; the actual percent change was 9.56 percent.

Only two of the state’s one hundred counties experienced a 30 percent or more increase in VMT during this eight-year period. Both of these counties with larger increases were in the coastal region. While an additional 35 counties experienced between 10 and 30 percent change in MVMT between 2003 and 2007, fifty counties experienced less than a 10 percent increase. Overall, the increases suggest both good news and not so good. On the positive side, a healthy economy is reflected in these numbers. On the other hand, the highway system, particularly in the larger urban areas, is experiencing increasing congestion, increasing commuting time, accompanying traffic safety issues, air and water quality issues, and higher public demand for highway improvements. Thirteen counties experienced a decrease, which may reflect a slow economy in these counties. 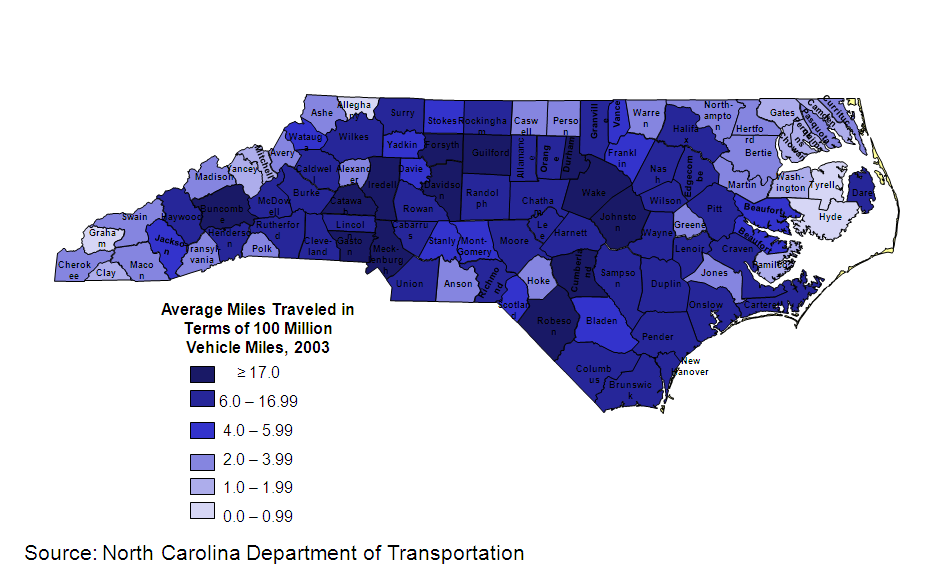 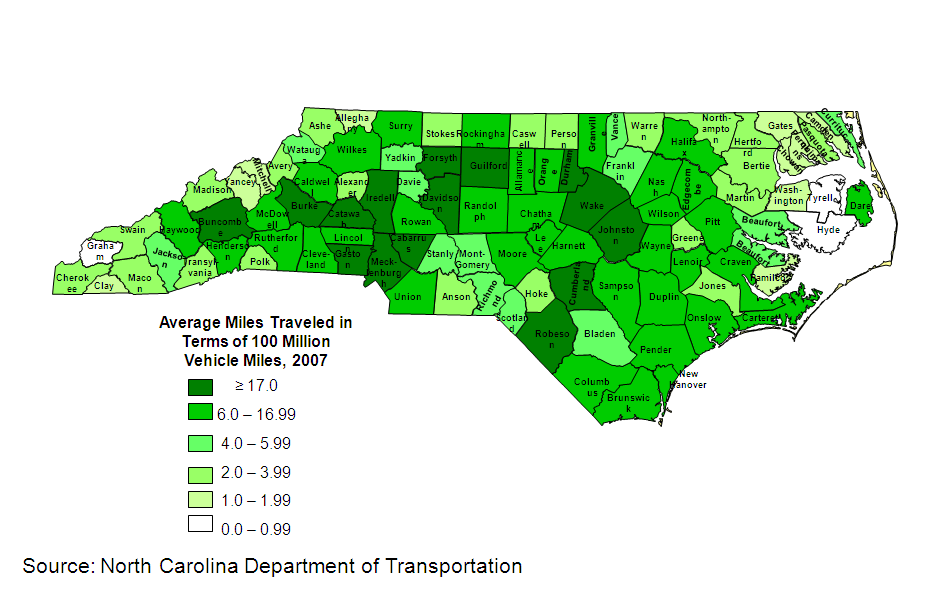 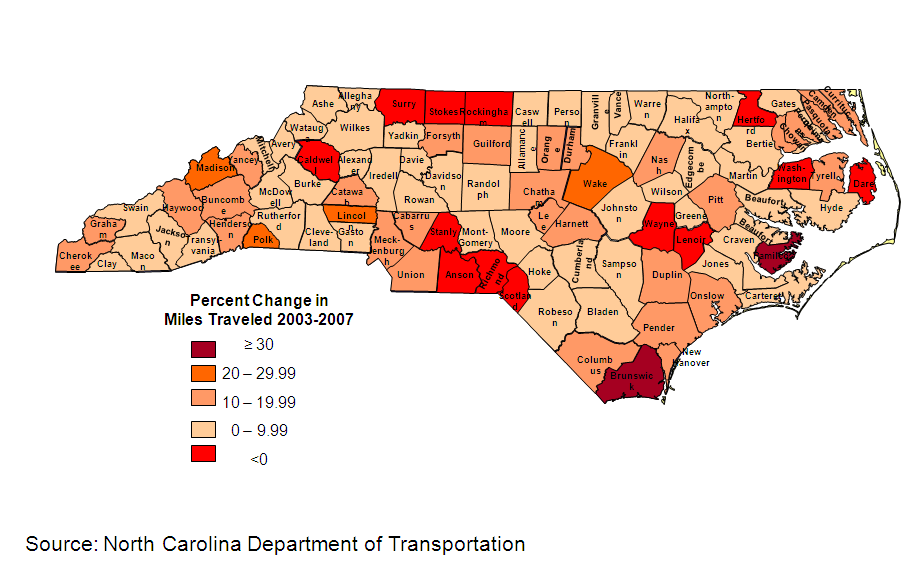 One might obtain more insight into the cause of increases and decreases in Vehicle Miles Traveled by comparing counties in Figure 4 with Figures 4a and 4b in the NC Atlas web site chapter on Population.

As Table 1 indicates, between 2004 and 2009, total rural and urban public road length increased by 2,651 miles. While this is a rather large number, on the statewide scale, this equates to an insignificant increase in actual highway mileage inventory during any given year. The largest increase in new roadway mileage was additional “local” roads on the state’s urban system. A few miles of Interstate highways were added in some of the years, and these small increases in the centerline miles of major highways has added significant congestion relief to local residents and commuters. These miles increased do not include additional lane miles, such as when two-lane highways are widened to three, four, or five lanes. Mileage shown in Table 1 reflects roads, streets, and highways maintained by all agencies (state, municipal, Federal park and forest roads, etc.).

Table 3 relates various growth measures from 1990 through 2008 (the latest year that all these measures are commonly available). Note that the number of licensed drivers and VMT increased at much higher rates than did vehicle registrations. Table 4 and Figure 5 illustrate a one-year “snapshot” of the number of vehicles by type that were registered in the state in the year 2008. 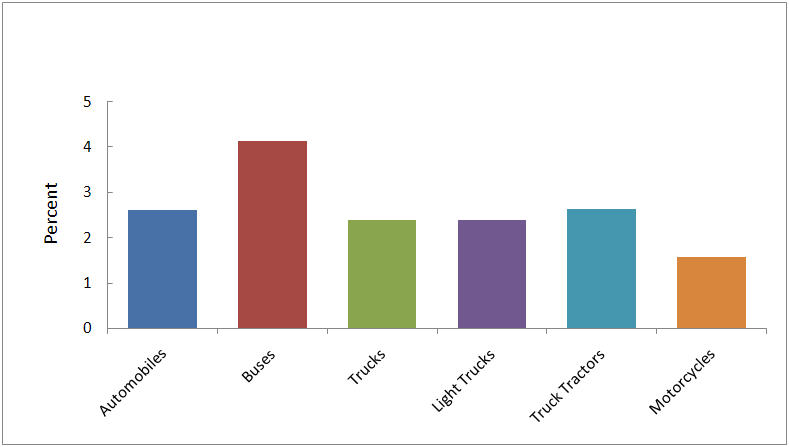