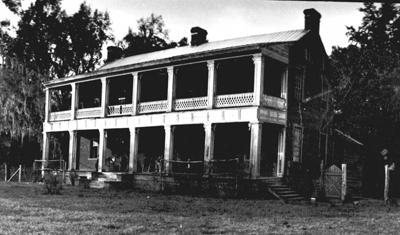 Thomas Brown, Revolutionary War patriot and senator of the North Carolina General Assembly, was born in Bladen County, the son of John and Lucy Bright Brown. His father, the oldest of four sons, was one of the many native Scots who settled along the Cape Fear River.

As early as February 1766, Brown became involved with the movement that was later to produce the American Revolution. He was part of a group of men from Bladen County who attempted to secure a redress of grievances during the Stamp Act troubles. He joined General Hugh Waddell in his expedition against the Regulators, prior to the Battle of Alamance and the joining of Waddell's force with Governor William Tryon's army. In June 1774 a committee of safety was organized for Bladen County with Thomas Brown a member. A year later, after taking an oath of secrecy, he attended in Wilmington a general meeting of the committees of safety in the Wilmington district and signed a bill of association, stating: "We do unite ourselves under every tie of religion and honor, and associate as a band in her defense against every foe; hereby solemnly engaging that whenever our Continental or Provincial councils shall decree it necessary, we will go forth and be ready to sacrifice our lives and fortunes to secure her freedom and safety." As a result, Brown became one of the foremost men of the Cape Fear in pushing forward the Revolution.

In 1775, Brown married Sarah Bartram, whose father, William Bartram, was also a patriot. Fellow patriot Thomas Robeson became Brown's brother-in-law by this union. Sarah bore her husband one daughter, Elizabeth, who, although dying at the age of five, outlived her mother, who died 29 Apr. 1779.

Brown, as lieutenant colonel of the Bladen County militia, distinguished himself highly at the Battle of Moore's Creek Bridge on 23 Feb. 1776. In May of that year he was raised to the rank of colonel and given command of a force of fifteen hundred men recruited from the Wilmington and New Bern districts for the protection of the Cape Fear against the British. With the disappearance of the British fleet from the Cape Fear, Brown's force was disbanded in August, and he returned to Bladen County to help suppress the Tories there. He became a member of the provincial congress that met at Halifax in November 1776 and took part in the formation of the state constitution.

From 1777 to 1781, Brown occupied himself with the control of the Tories in the Bladen County area. After the fall of Charleston to the British and the defeat of General Horatio Gates at Camden, Tory strength increased drastically. With the occupation of Wilmington on 28 Jan. 1781, General Alexander Lillington called for the militia of his district to form a body for opposition to the British. Lillington's forces held the British in their lines until Cornwallis's march down the Cape Fear forced the militia to disband and return to the protection of their home counties. The Cape Fear counties were overrun, devastated, and conquered by the Loyalists. Brown and his Whig followers were driven out of Bladen County and forced to live in the swamps of South Carolina.

In September 1781, Brown and some 150 followers proposed a daring night raid out of South Carolina to attack the Tory force of about 400 men at Elizabethtown. This determined assault was met with considerable resistance by the Loyalist forces, who lost most of their commanding officers without the Whigs suffering a single casualty. This victory disheartened many of the Tories in Bladen and Duplin counties, but it was not until the appearance of Generals Griffith Rutherford and Thomas Butler in October that the Whigs were allowed to control the area.

Brown was wounded on several occasions. He was known for his vigor and enterprise; in his relentless pursuit of Tories, he was an officer who gave no quarter.

After the war, Brown became a major general of the state militia and served in the assembly as a senator in 1785, 1786, and 1788. He also remarried, this time to Lucy Bradley, daughter of Richard and Elizabeth Sharpless Bradley. Of the four children by this union, the youngest daughter, Lucy, later became the wife of Governor John Owen of North Carolina.

Brown died at his residence near Ashwood in Bladen County.