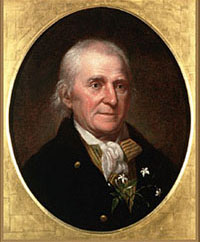 William Bartram, naturalist, was the son of John Bartram, an eminent naturalist, and his wife, Ann Mendenhall Bartram. He was born near Philadelphia, where his gifts as an artist brought him in his youth to the attention of Benjamin Franklin. Franklin proposed that William become an engraver, but he was apprenticed instead to a Philadelphia merchant in 1756. In 1761, his apprenticeship completed, William moved to Bladen County, where his uncle William had a large plantation and considerable property on the Cape Fear River. Here the nephew opened a store and spent the next four years alternately occupied with his business and investigating the flora and fauna of the Cape Fear region.

The Bartram family was established in the Cape Fear country by the early eighteenth century, when Bartram's grandfather, the first William Bartram, settled at Whitoc plantation. There he was attacked and killed by local Indians, and his wife and sons, William and John, were taken captive. Mrs. Bartram was subsequently able to return to Philadelphia with her sons. John remained in Philadelphia, but William later returned to North Carolina to resume control of their father's estate. He became a man of considerable influence as a colonel of militia and was for many years a representative in the colonial legislature of North Carolina. White Lake in Bladen County was known as Lake Bartram when he owned much land in the vicinity. Colonel Bartram also had a son named William, first cousin of the naturalist, and it was this household that the naturalist joined in 1761. The two cousins were often companions on botanical and zoological jaunts in the vicinity of Ashwood, Bartram's plantation. 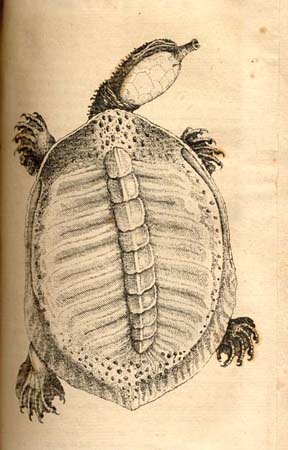 The mercantile venture of William Bartram did not prosper in Bladen. John Bartram, newly appointed as botanist to King George III, stopped by Ashwood in 1765 on a mission to Florida; he took his son with him on the trip, and afterward the two returned to Philadelphia. William tried for three more years to find success as a merchant in Philadelphia, but by 1770 he was almost bankrupt and disillusioned with the effort. He returned to Ashwood, where, during the next two years, Colonel Bartram, his wife, and their son, Dr. William Bartram, all died. Leaving Ashwood in the latter part of 1772 and returning once more to Philadelphia, Bartram in the following spring set forth on his famous "travels," outlined in the volume Travels through North and South Carolina, Georgia, etc., which he brought out in 1791. Chiefly through the fine reception accorded to the book, Bartram became an established member of the international literary and scientific community and a member of many American and foreign learned societies. A Quaker by upbringing, Bartram became an ardent deist.

Bartram visited Ashwood, apparently for the last time, late in 1776. He always held Ashwood in affectionate regard as a place where he and his cousins had engaged in "pastimes . . . of the most Innocent and simple nature such as amuse Brothers, Sisters and Friends." At least one biographer has suggested that William had a brief love affair with one of Colonel Bartram's daughters, but the naturalist was never married.

Additional Resources:William Bartram, 1739-1823
Travels Through North & South Carolina, Georgia, East & West Florida, the Cherokee Country, the Extensive Territories of the Muscogulges, or Creek Confederacy, and the Country of the Chactaws; Containing An Account of the Soil and Natural Productions of Those Regions, Together with Observations on the Manners of the Indians. Embellished with Copper-Plates. Philadelphia: Printed by James & Johnson, 1791. UNC Libraries: https://docsouth.unc.edu/nc/bartram/menu.html