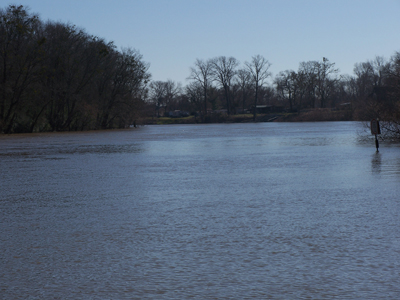 Roanoke River is formed in the Blue Ridge Mountains in Montgomery County, Va. by the junction of North Fork and South Fork; it then flows southeast into Warren County, N.C., north of Roanoke Rapids. From there it travels along the Halifax-Northampton, Halifax-Bertie, Bertie-Martin, and Bertie-Washington County lines into Batchelor Bay in the Albemarle Sound. The Roanoke River has appeared under a variety of names in North Carolina history, including Morattico River in 1657 and Noratake River in 1671, but Edward Moseley wrote the name ‘‘Roanoke River’’ on his map of 1733. The river was a source of water for the early settlements in Virginia, North Carolina, and South Carolina.

The Roanoke is dammed several times along its course to form a series of reservoirs. In northeastern North Carolina, the river is impounded to constitute the Lake Gaston reservoir, which stretches north and reaches the John H. Kerr Dam in Virginia, which forms Kerr Lake. Other reservoirs include the Smith Mountain Lake and Leesville Lake. The size of the Roanoke’s North Carolina watershed is 3,600 square miles; the total length of the river is about 410 miles. The river basin encompasses 37 municipalities in the state, including Henderson, Halifax, and Williamston. In the early 2000s the region had a population of more than 275,000. The Roanoke has benefited from conservation efforts by the Nature Conservancy, the North Carolina Wildlife Resources Commission, and other agencies and private organizations. It remains a vital habitat for large numbers of fish, birds, and mammals as well as a principal recreational area for North Carolinians and visitors to the state.

Hairr, John. 2005. "The Roanoke River near Weldon in Halifax County."

Montgomery County is NOT

Montgomery County is NOT north of Roanoke City. It is southwest of the city and the whole county of Roanoke. Check a map. Sad part is, the article was posted in 2006. Misinformation for 14 years. Grade A work guys. Good job

Thank you for your comment. This comes fromma published source, but I will bring it up to staff who may add additional information to correct.

What exactly is the history

What exactly is the history of the basin? what history happened here?

Thanks for visiting NCpedia and for sharing this question.

The Roanoke River and its surrounding basis has a lot of history in the settlement of North Carolina. You may be interested in these search results in NCpedia related to the Roanoke River -- https://www.ncpedia.org/gsearch?query=roanoke+river. If you scroll through them, you'll see numerous topics related to the river including American Indian history, history of European settlement, widlife and fishing, the state's geography and geology and more.

Please let us know if we can help with anything else.

Was wondering if it is

Was wondering if it is possible to do a nautical exp. to the Outer Banks to as close down river on the Roanoke River! I want to do the exp. on my 1100 cc Kawasaki Jet Ski with a modified gas tank and careful planning and possible extraction points along river for possible food,gas, maintenance, or med attention.

Did you find anything out

Did you find anything out about doing the jetski trip?