The California Gold Rush, which occurred in the late 1840s, was one of the most compelling events in the history of westward expansion. Thousands of people caught “gold fever” and decided to go west in order to “see the elephant,” as the great adventure was often called. Lightly populated by American Indians, Spanish missionaries, and traders, California passed into the hands of the United States as a result of the Mexican War of 1846–48. A number of American settlers, including the ill-fated Donner Party, had already made the overland trek from the east, but the situation was about to be rapidly transformed. On January 24, 1848, James Marshall, overseeing construction of a millrace at Sutter’s Mill on the American River, noticed flakes of metal in the water. Various tests, including that the metal could be pounded flat unlike brittle pyrite (fool’s gold), convinced Marshall and his boss John Sutter that the material was in fact real gold. Despite their best efforts to keep the discovery a secret, word spread like wildfire and the mill was largely abandoned as workers caught the first cases of "gold fever." The reaction of many was typified by J.H. Carson, who wrote, "A frenzy seized my soul...piles of gold rose up before me..."

Excitement spread to San Francisco via the leather lungs of Sam Brannan, who ran through the streets, hollering “Gold, gold, gold from the American River.” Before doing this, he had scouted out a suitable site for a store located adjacent to the diggings. This was an early indication of who would be the greatest profiteers from the Gold Rush. Before long, San Francisco emptied as men went off to the mines, while its harbor was jammed with ships abandoned by their crews, who did the same. People from as far away as Hawaii, Chile, and Peru arrived during the summer and fall of 1848, and in fact these “Forty-Eighters” often picked out the best sites for mining and had the most success.

Not surprisingly, word of the discovery was slow to reach the eastern United States during this pre-telegraph era. Thomas O. Larkin, consul at Monterey, sent dispatches describing the discovery to the east, while a tea caddy filled with gold was displayed at the War Department in Washington, D.C. President James K. Polk gave great publicity to the gold discovery in his December 5, 1848 message to Congress, reporting that “the accounts of the abundance of gold in that territory are of such an extraordinary character as would scarcely command belief were they not corroborated by the authentic reports of officers in the public service.” It was now that the excitement really began, and thousands of people began planning their trip to California for the following spring.

Forty-Niners coming to California from the east had three travel choices — whether to go by sea via Cape Horn or Panama, or overland. The amazing Cape Horn route was popular in the early days of the Gold Rush, with hundreds of vessels of varying quality making the more than 13,000-mile voyage around the tip of South America. If weather conditions were unfavorable, this voyage could take as long as eight months. Due to great demand, the ships were often jammed with passengers, and unsanitary conditions prevailed. A number suffered from scurvy from a lack of sufficient variety in their diet. Worse yet, since the crews often took off in search of gold once arriving in San Francisco, many people were left behind waiting for ships in the east. Others failed to account for the reversal of the seasons in the Southern Hemisphere, and suffered from bitter wind and cold as the ships rounded Cape Horn in July or August.

Some intrepid Forty-Niners saw a possible shortcut in the sea route — instead of going all the way around Cape Horn, why not cross through Panama in Central America? This route was indeed much shorter on paper, but suffered from its own pitfalls. In sailing from the east coast of the United States, one had to disembark on the Atlantic side of Panama, and since neither railroad service nor the canal existed at this time, cross overland across the Isthmus to the Pacific coast. The tropical climate and endemic diseases claimed many victims. Many people found that having to rely upon two ships for passage to San Francisco merely doubled their chances of being delayed, with disastrous results.

In spite of all of these difficulties, it has been estimated that as many as 25,000 persons made the sea journey to California in the aftermath of the gold discovery, or about as many as lived in the whole territory before 1848. These numbers were dwarfed by those who opted for travel by land. Many people already possessed much of the basic equipment, especially wagons, oxen, and mules, required for the trip, and those west of the Appalachians were relatively close to the trail. A good number of these Forty-Niners passed through St. Louis, where they were impressed by the hustle and bustle of the rapidly growing city. Others, such as William Swain, were appalled that St. Louis was "...dirty, with black narrow streets filled with cars drawn by mules. It is a bare heap of stone and brick, covered with coal smoke..." Merchants in St. Louis shipped supplies to Independence and St. Joseph, Missouri, the jumping-off points for the trail.

One of the biggest and most important decisions that those going overland had to make was when to embark on the trail. If a group started too early in the spring, they found that grass on the Great Plains might not yet be high enough for their cattle to graze upon, wearing out the teams at the very outset of the journey. On the other hand, if one started too late, much of the grass might be consumed by the animals of those who had started earlier, or worse yet, too many miners might already be at the diggings. Finally, there was the recent memory of the fate of the Donner Party, trapped in the Sierras with no food by the first winter snowfall of 1846–47. For all of these reasons, it seems that most overland Forty-Niners tended to start somewhat earlier than would have been best.

From Missouri as far as Fort Hall, in present-day eastern Idaho, most followed the already well marked Oregon Trail. The green travelers gained experience the hard way, suffering such accidents as being run over by wagons, shot by nervous companions, or even shooting themselves as they pulled a loaded rifle out of a wagon muzzle first. However, the greatest hazard of all certainly was disease, especially the dreaded cholera, with which a victim could be "merry at breakfast and dead at supper." The foul water, incessant labor, grueling walks, and varying weather all contributed to the toll. For too many, as diarist Alonzo Delano put it, "the spade of the adventurer was first used to bury the remains of a companion."

Past Fort Hall, a majority of the overland Forty-Niners followed the Humboldt River, soon to be nicknamed the “Hellbolt” or "Humbug." Muddy and alkaline, the river diminished steadily as it meandered west. Such grasses as it supported were quickly worn thin by the vast numbers of cattle going to California. The Humboldt simply vanished into the sand at Humboldt Sink, in western Nevada. There began the most difficult part of the journey, the Forty Mile Desert to the Sierras. Although not far by the standards of the entire trip, the exhaustion of men and animals led to the trail becoming littered with discarded belongings and the corpses of horses, cattle, and humans. Finally surmounting with difficulty the heights of the Sierras, the Forty-Niners staggered into the mining camps. As historian Ray Allen Billington put it, they had "indeed been well tested."

The great adventure of the mass migration to California completely changed the course of westward expansion. Up until 1849, there had been a gradual movement of Euro-Americans from the Appalachian Mountains to the Mississippi River and areas beyond, which were geographically contiguous. The only significant exception to this had been the movement of relatively small numbers of people along the trail to Oregon. Suddenly, more than 100,000 people leapfrogged the Great Plains, Rocky Mountains, and western deserts within a period of just a few years, many employing St. Louis as a transit point. Motivated primarily by greed, these Forty-Niners also embodied other human qualities, including bravery and a search for adventure, which made their story timeless. 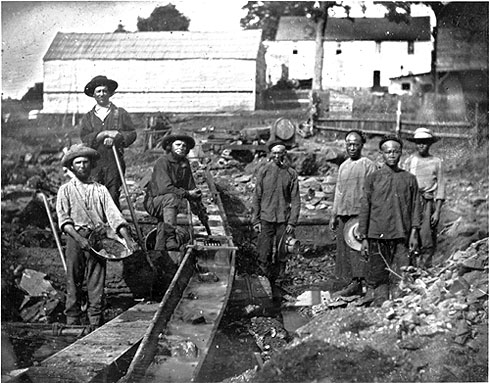 White and Chinese miners hoping to strike it rich during the California Gold Rush, photograph 1852. 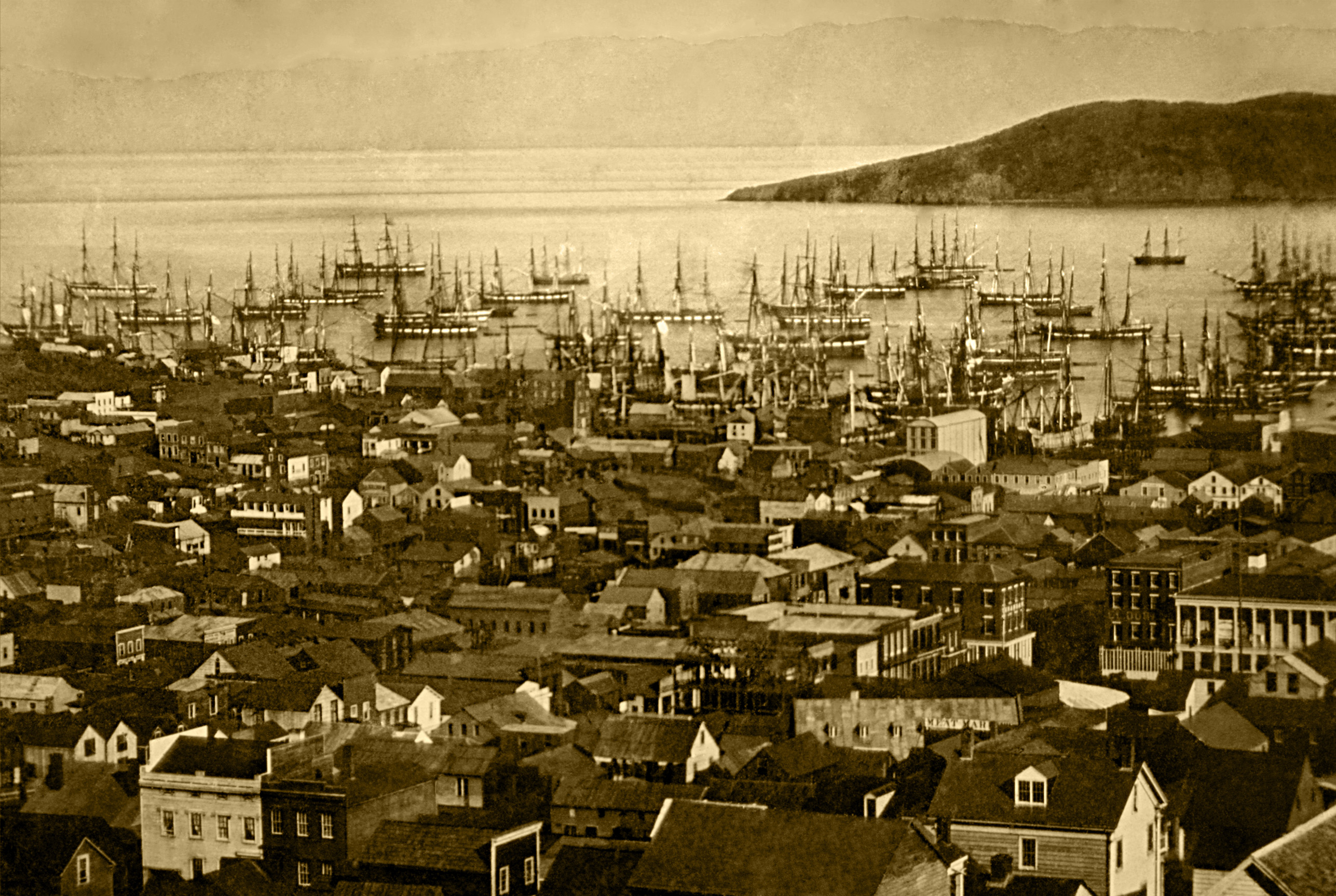 By 1851, the gold rush had made San Francisco a thriving port city, as seen in this photograph. 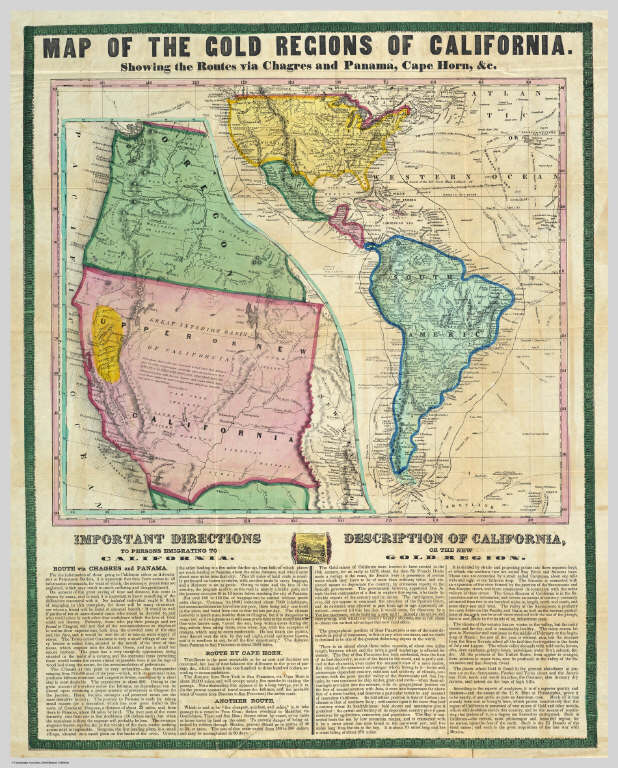 Gold-hunters heading for California from the East Coast could choose the hard and dangerous overland route -- or take a steamship all the way around South America. 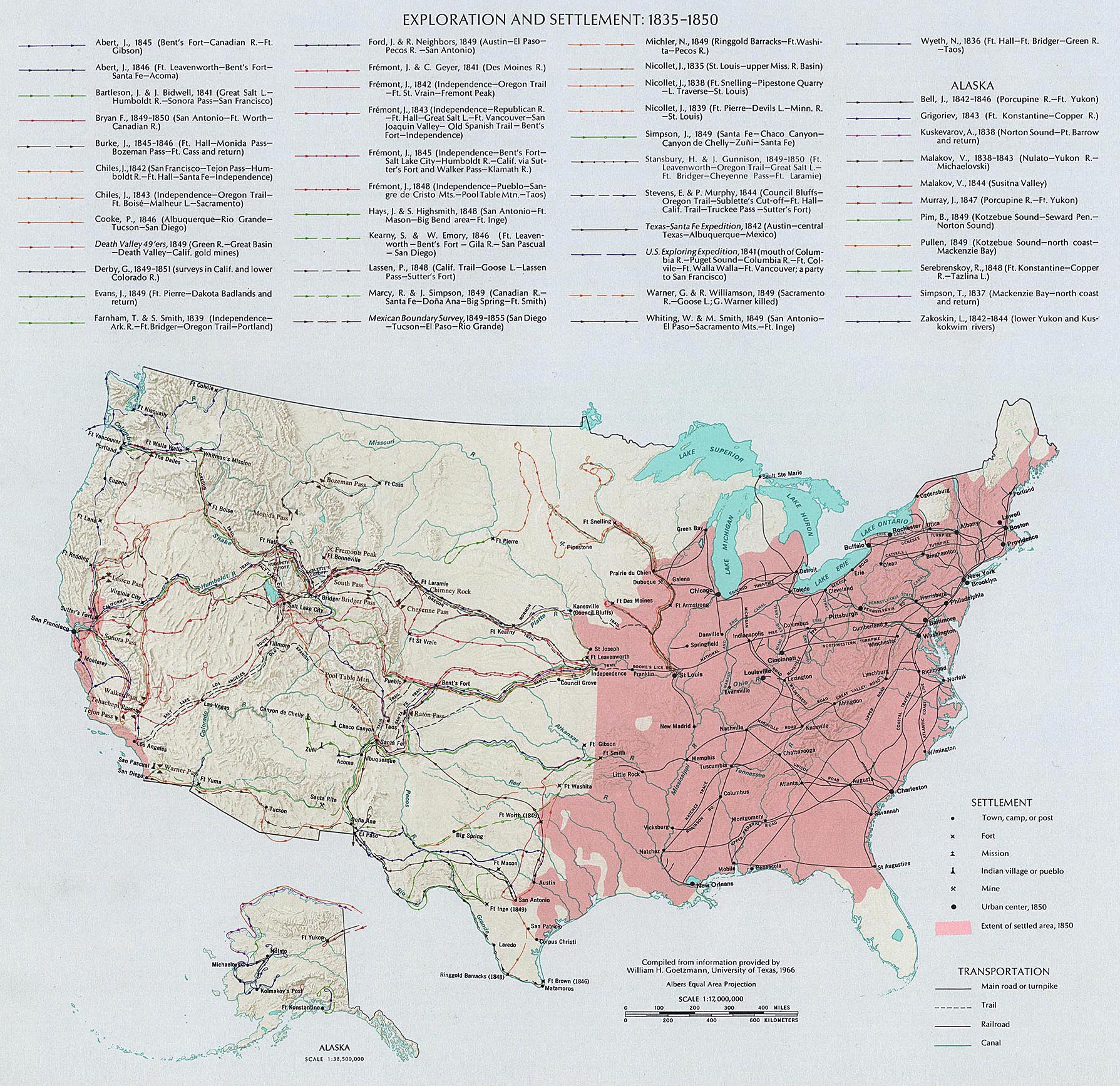 This map shows the various routes available across the United States in 1850.