The Knights of Labor

During the late nineteenth century, many workers joined unions in hopes of improving their working conditions and wages. In just three years between 1877 and 1880, the number of national unions grew from three to eighteen.

The Knights of Labor was one early labor union, organized in Philadelphia in 1871 by garment cutters. In its early days, the Knights of Labor was a a secret society, which fueled rumors in the press that they were dangerous or violent. The rumors were encouraged by factory owners who feared that organization of their workers would lead to strikes.

In this 1878 statement of goals, the Knights of Labor expressed concern about the accumulation of wealth by some people and the possible “pauperization,” or impoverishment, of workers. It called for the reduction of the workday to 8 hours; the prohibition of the employment of children under age fifteen in factories, workshops, and mines; equal pay for men and women; and other labor laws that we take for granted today. It also called for the use of arbitration, or negotiations, rather than strikes, to settle labor disputes.

The Knights of Labor opened its first assembly in Raleigh in 1884 and expanded into most counties in North Carolina, but made little progress toward its goals in the state. Resistance from business managers limited its effectiveness. In addition, the fact that the union was open to both whites and blacks made it unpopular among many white southerners, who resisted the idea of social equality between blacks and whites.

Preamble and Declaration of Principles of the Knights of Labor

The alarming development and aggressiveness of great capitalistsHere a "capitalist" is someone who controls capital, the money and equipment needed for production, and who therefore controls the earnings of industry. and corporations, unless checked, will inevitably lead to the pauperization and hopeless degradation of the toiling masses. It is imperative, if we desire to enjoy the full blessings of life, that a check be placed upon unjust accumulation, and the power for evil of aggregated wealth. This much-desired object can be accomplished only by the united efforts of those who obey the divine injunction, "In the sweat of thy face shalt thou eat bread."This is (among other things) what God said to Adam and Eve when he threw them out of the Garden of Eden (King James Bible, Genesis 3:19). In Eden, they had not had to work for their food; now God was saying that they would now have to work for their food. The Knights of Labor were saying that industrial workers were obeying God's commandment -- but they implied that, by contrast, factory owners did not, because the owners merely profited from the sweat of others. Therefore we have formed the Order of the Knights of Labor, for the purpose of organizing and directing the power of the industrial masses, not as a political party, for it is moreLabor unions are often formally called "brotherhoods," and early labor unions genuinely meant that workers should be like brothers to one another. This is what the Knights of Labor meant by being "more" than a "political party" -- though politics would be necessary to achieve what they wanted. -- in it are crystalized sentiments and measures for the benefit of the whole people, but it should be borne in mind, when exercising the right of suffrage, that most of the objects herein set forth can only be obtained through legislation, and that it is the duty of all to assist in nominating and supporting with their votes only such candidates as will pledge their support to these measures, regardless of party. But no one shall, however, be compelled to vote with the majority, and calling upon all who believe in securing the greatest good to the greatest number, to join and assist us.

We declare to the world that our aims are:

In order to secure these results we demand of the State"The State" with a capital S usually refers to the nation and its government in a general, formal way.:

And so demand at the hands of Congress:

And while making the foregoing demands upon the State and national government, we will endeavor to associate our own labors to: 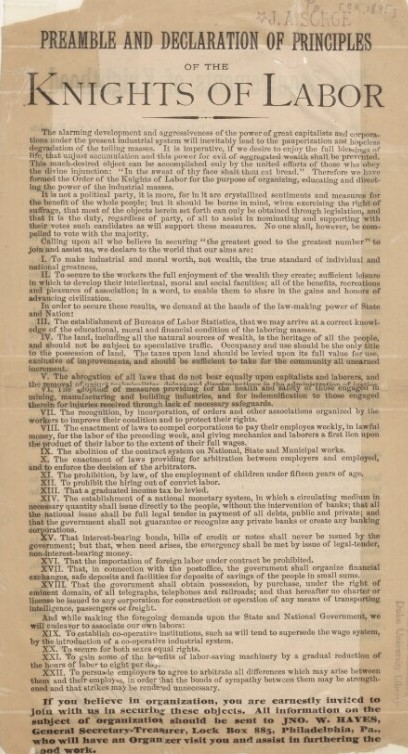 A broadside with the Knights of Labor preamble and declaration of principles in Duke University Library's collection. 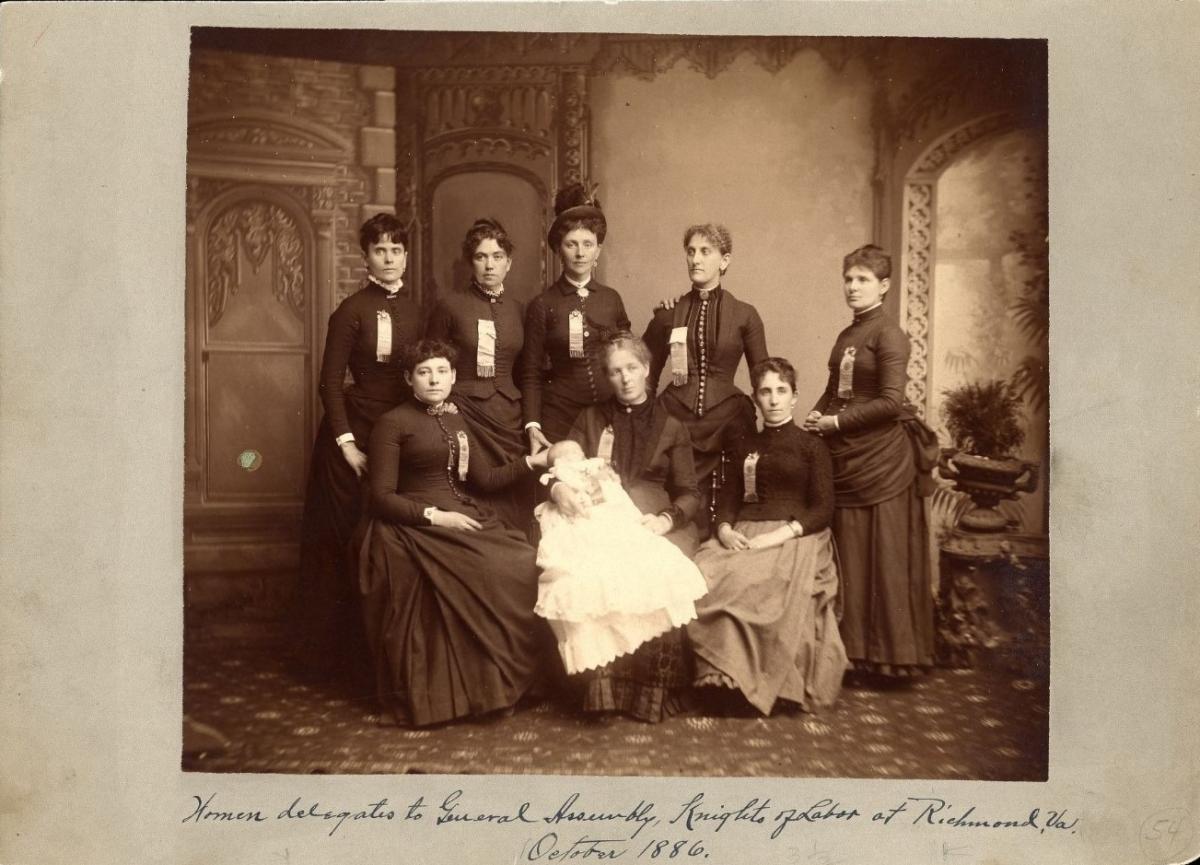 An 1886 photograph of eight women delegates to the General Assembly of the Knights of Labor at Richmond, Virginia. From the collection of The Catholic University of America. 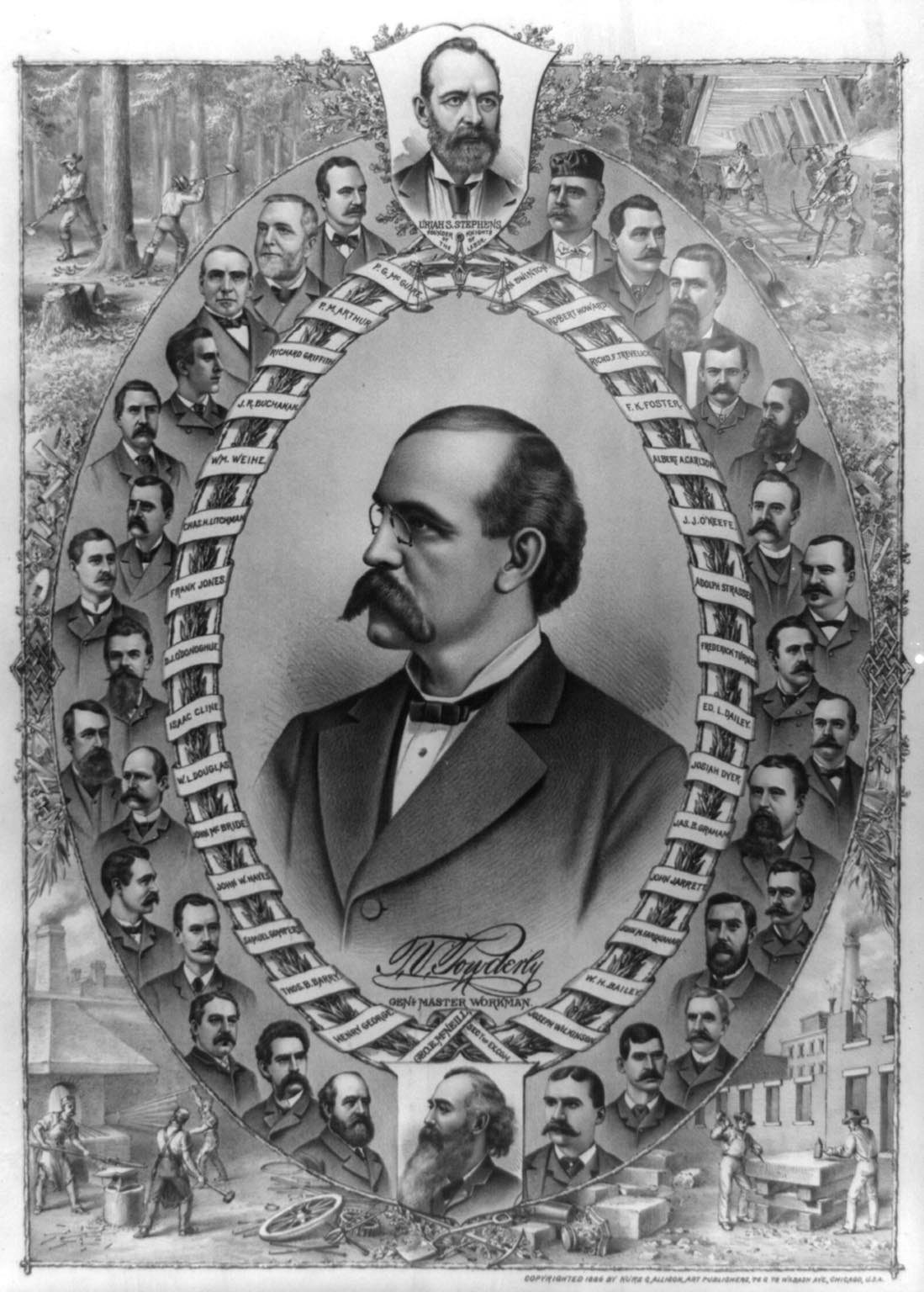 This 1886 poster displayed portraits of leaders of the Knights of Labor, along with scenes of workers. 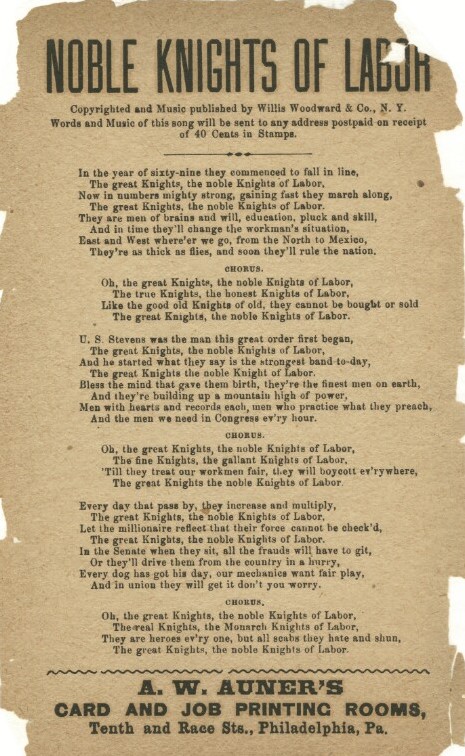 Defining the Era | The Gilded Age