Moses Ashley Curtis was born in Stockbridge, Massachusetts, in 1808. He attended Williams College, and in October 1830 he came to Wilmington as a tutor in the family of Edward Dudley, then Governor of North Carolina. In his free time Curtis studied the plants of the region, walking in the woods, pine savannahs, and sandhills near Wilmington. He married a Wilmington woman in 1834. A year later, he was ordained as an Episcopal priest, and his teaching and missionary work took him to Lincolnton, Raleigh, Washington, and Hillsborough, North Carolina, as well as to Society Hill, South Carolina. In all these places he continued his studies of the plants of the Carolinas, and in time he became a noted botanist, respected especially for his work on mushrooms and other fungi. He eventually settled in Hillsborough in 1856 and lived there until his death in 1872.

This diary was kept by Moses Ashley Curtis, who was living in Wilmington, North Carolina, in 1831. In these entries from September 10–21, he describes the events that followed Nat Turner’s Rebellion — the rumors of an uprising of enslaved people in Wilmington and the surrounding counties, the terrified reactions of white residents of the city, and the retribution they exacted on the black people they believed responsible for the plot.

News today of an intended insurrection in Wilmington & vicinity.... It appears that a Baptist church meeting was to be holden about the first of Oct. at which the blacks from several counties were to assemble & commence their work. It was communicated to a free black who reported it, & one Dan, of W. a freeman, formerly peaceable & trusty, accused of showing the magazineThe magazine was the place where arms and ammunition were stored. of powder & arms to the revolters. A number of those implicated are in jail, & Dan, it is said, will inevitably lose his life. A large corps of volunteers was speedily organized in W. for defence, & scouts sent out to reconnoitre.

Bless me! Now the explosion has taken place indeed & the women (some of them he-women) are in a desperate taking. — As I was siting calmly with my brood this evening, our younger mistress returned from a neighbor’s, sat down, rose — sighed — clasped her hands behind her neck — went out & called to me. "Well, what?" — "Oh! — oh! Mr. C. There’s an excitement in town." "What sort of an excitement? You are very indefinite." "Oh! An express has come from W. saying that 20 blacks are within 20 miles of W. & advising us to be on our guard." — "Oh! you had better go to bed. If they are as far off as that you may sleep easy tonight." — At last the elder mistress gets the story, & a young child in the family packed the children off to bed to save them the fidgets, & heard the women express their concern & the young Miss wail most bitterly, while I sat by & tried to console by reason & ridicule. "Why the story is false in the face. Two hundred men so foolhardy as to march on such a place as W. in open day? And if they should, the volunteer company of twice their number will annihilate them before they are within 10 miles of the town, & 50 whites could disperse 200 blacks. What are you frightened about?" — I at last concluded to go out & learn the truth of the case. — Fear & despair, what confusion! The women were all flying or fled with their trinkets & mattresses to the garrison. I overtook one with two children with whom I walked on; & when I reached the garison there were 120 women packed in a small dwelling half dead with fear. One was stretched out on a mattress in the hysterics, a number fainted, & one was jabbering nonsense, in a fit of derangement. A few men too I noticed with tremulous voices, & solemn visages, pacing back & forth in fearful anxiety. Hang ‘em! thought I. I found but one man, a clergyman & a northerner, who was at all cheerfull & fearless. Him I addressed, but found that no arrangements had been made for the night & I went home. The women at home were now more under the exercise of reason, & having no inclination to follow their timid sisters & repose under the muzzles of the great cannon of the fort. — After some waiting I sallied out again, & found an old lady just starting for the garrison in a high flurry. I offered my arm. "Where are all your folks?" "At home." I offered my services again. "No, no, (looking round a dozen times) I can get along" — "But let me hold your umbrella, madam" — "Oh, no, no, you go home & take care of your children." — So I walked on behind, her advice notwithstanding. — When at the garrison — "Where are all your children, Mr. C." said the women. "Abed & asleep," said IHe replies as if they are his own children, but he is referring to the Dudley children, whom he tutors. — "Oh," sighed the women at my temerity. I found that most of the town were arming to comfort the women & were to patrole the village through the night. So I came home, & at the solicitation of the women have placed a gun in my room charged with two balls. Now what a contemptible fuss for nothing at all, except a want of reason & judgment. — I intend to sleep as quietly as usual, though few eyes will close in this town tonight. I believe that ours is the only family out of the garrison.

We did not wake this morning & find our throats cut, & in this house had as quiet sleep as ever. In the garrison was no room to sleep. Those women who at last revived under a sense of their perfect security had a fine frolic, declaring they never passed so short a night in their lives; while the frantic & timid were plying their noses with cologne, honey & lavender waters & hartshornCurtis paints a scene of well-dressed women "freshening up" with cologne and scented waters. After a night in the garrison they probably wouldn't have had a chance to wash, and the scents might also have helped them forget the previous night's unpleasantness. But Curtis also mentions hartshorn. Spirit of hartshorn, also known as "smelling salts," have a strong aroma of ammonia that can be used to revive someone who has fainted. It is called "hartshorn" because the active ingredient in smelling salts, ammonium carbonate, was distilled from shavings of the horns of harts (deer). Curtis mentioned earlier that women were fainting from fright, and here he suggests that they needed something stronger than lavender to revive themselves the next morning. To judge by Victorian literature, women seem to have fainted a lot in the nineteenth century. In part this comes from a view of women as weak, but in fact upper-class women probably fainted far more often than we would expect today, because the tight corsets they wore made it difficult for them to breathe. (At least one book advised people planning balls to keep smelling salts at hand to be prepared for the inevitable fainting spells that would occur.) Women might also pretend to faint as a way of being dramatic, getting attention, or avoiding something unpleasant, such as homework -- or, in this case, the terror of a slave insurrection.. We poor folks who were sleeping peacefully at home passed a review there for not falling in with the current of fearful ones. I hope we shall none of us die for running such against it. — The light of the sun seems to have infused the light of reason into their minds at this late hour, & none of them were at all alarmed & only went to the garrison because the rest went.

At 5 o’clock the inhabitants met to form a corps of defence. I enrolled my own name, took a musket & ammunition & came home, with a requisition to meet them at 7 o’clock. In the mean time the boat arrived from town. We met at seven & delivered back our arms. — This is the silliest move of all, in running now into the extreme of neglect. — But the story is simple & short. A few revellers some miles above W. procured a field piece which they frequently discharged during a night, which gave an alarm. Such an event in view of the late outrages in Va. was well calculated to excite alarm. This story tied to another of a few negroes being seen in the woods, & travellin a few miles, grew to the appalling size of 200 negroes being close on W. — The story came direct & through two individuals so that there could be no doubt of its truth. — The people of W. must have spent a wretched night, its horrors being aggravated by an alarm gun, at which the women & children fled to certain dwellings previously designated & the men collected with their arms. Here folly shines out. The militia collected quite in the rear of the women, & I believe remained there. It was the extreme of ignorance or fear that, knowing the enemy to be near, they did not march out to prevent their entering the town, instead of leaving every avenue unprotected, & a free passage to the defenceless women. The confessions of the blacks, who were previously taken up in W. in consequence of discoveries of an intended insurrection, show that five counties were combined. They expected about 4000 blacks to engage in it. The first of Oct. was designated on which to commence their infernal devastatons & butcheries. In W. they were to set fire to the Bapt. & Meth. churches & during the tumult to fall upon the families & destroy them.

Four of the insurgents have been condemned in W. & have received the reward of acknowledged guilt. One of them was deeply affected at his situation. Dan was horribly indifferent, & I believe had enticed some or all of them to a participation in the plot. Their heads are sticking on poles in different parts of the town. Four more are to be shot today or tomorrow. 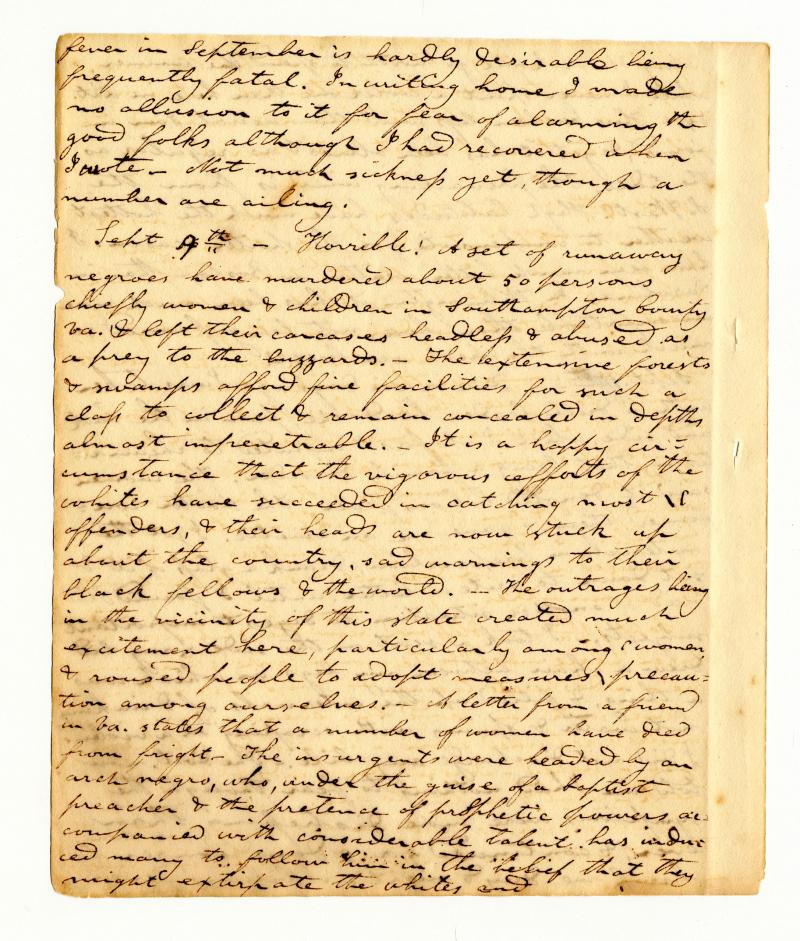