Boundary Between North Carolina and the Cherokee Nation, 1767

This Western Boundary Agreement of 1767 between North Carolina and the Cherokee Nation was a further attempt to re-establish peace between the Indians and colonists that resulted from white settlers encroaching on Cherokee land. The original Agreement did not contain line breaks or paragraphs. Those have been added to assist the reader. A scanned image of the original Agreement is available via North Carolina Digital Collections.

An Agreement between Governor Tryon and the Indians in regard to the Western boundary.

Be it Remembered that on the thirteenth day of June in the seventh year of the Reign of our Sovereign Lord King George the Third by the Grace of God of Great Britain France and Ireland. King Defender of the faith &cet cetera. and in the year of our Lord One Thousand Seven hundred and sixty seven it was agreed in Behalf of his Most Excellent Majesty of the one part and the head Beloved men and Warriors of the Cherokee Nation of the other part --

Witnesseth that whereas by a Talk had between the head beloved men and Warriors of the Cherokee Nation and the Honorable John Stuart Esquire his Majesty's Superintendant of Indian Affairs for the Southern Department Dated the 20th Day of October One Thousand Seven Hundred and Sixty Five concerning the Boundary line Between the Frontiers of the Province of North Carolina and the Cherokee Hunting Grounds to avoid all further disputes, was unanimously agreed as follows, by the Prince of Chote Juds Friend and all the head Warriors and head Beloved men of the Over Hills Middle Settlements and Lower Towns

that a Line on the North Carolina side should be Run. To commence where that on the South Carolina Terminates and to be run a North Course into the Mountains whence a Straight Line to the Lead Mines of Colo Chiswell should Fix the Boundary.

In pursuance to which Talk His Excellency William Tryon Esquire Governor and Commander in Chief in and over his Majesty's Province of North Carolina &c by commission, under his hand and seal, did appoint the Honorable John Rutherford, the Hon. Robert Palmer Esquire and John Frohock Esquire, Commissioners to run the said Boundary Line between the Frontiers of North Carolina and the Cherokee Hunting Grounds

and the Commissioners aforesaid with Alexander Cameron Esquire Deputy Superintendant and the head Chiefs and Warriors of the said Nation (to wit) Juds Friend, Tufftoe Sallowee, or the Young Warrior of Estatoe, Ecoy, Chenesto of Sugar Town, and the Wolf of Keowee and others Met on the Fourth day of June One Thousand Seven Hundred and Sixty Seven at Reedy River

and Run the Line as follows, Beginning at a Waughoe or Elm tree on the South side of Reedy River Standing on the Bank of the River where the South Carolina Line Terminates and Runs thence a North Course about Fifty Three Miles into the Mountains to a Spanish Oak marked with the Initial Letters of the Commissioners names and several other Trees with the names and marks of Juds Friend Sallowee Ecoy and others standing on the Top of a Mountain called by us Tryon Mountain on the head Waters of White Oak and Packet Creeks, White Oak running into Green River and Packet running into Broad River and as it was found Impracticable that a Line should be Run and marked through the Mountains to Colo Chiswell's Mines

and Commissioners aforesaid in behalf of his Most Excellent Majesty and the said Alexander Cameron Esquire, Juds Friend Tufftoe Sallowee Ecoy Chenesto and the Wolf of Keowee in Behalf of themselves and the head beloved men and Warriors of Cherokee Nation, agree determine and conclude that the Boundaries as aforesaid herein described shall stand be and remain the Boundary Line between the Frontiers of the Province and the Cherokee Hunting Ground until his Most Excellent Majesty's pleasure shall be further known thereon.

In testimony of which the several parties herein mentioned have hereunto interchangeably set their hands and seals the day and year first above written. 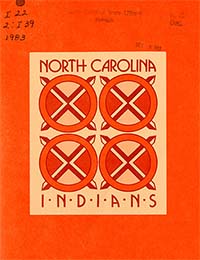 The NC Commission of Indian Affairs is a state government organization that was founded in 1971 by the NC General Assembly to address the needs of American Indian citizens in NC. This report was created by the Commission in 1983 to share the history and culture of NC's native peoples.