One such statement was made by Loyalists from Rowan and Surry Counties written most likely sometime around March of 1775.  During that time period, these counties and other inland counties were considered part of the "backcountry" or frontier, which included today's Piedmont and Mountain areas.

The address expressed the loyalty of the signers to the British Constitution and Crown and expressed protest against meetings and activities that were being undertaken by Patriots. The address was written and presented to Governor Martin, with the signatures of Samuel Bryan, a Loyalist, and 194 others.

The document would have been preserved in the records kept by the colonial government. Many of the colonial records held by the North Carolina colony later became part of the records of the British Government. In the 1880s and early 1890s, the State of North Carolina endorsed a project to collect, transcribe and publish its colonial and state records. Many of the originals would have been written by hand, and transcription is the process of copying that writing to reproduce it in a different format, such as in print book. Although the original of the hand-written address of the Loyalists from Rowan and Surry Counties does not appear to survive in North Carolina's records, it was transcribed at some point in time and included in a volume of colonial records first published in 1890.

The image pictured shows the text of the original 1775 proclamation as published in 1890.

Read the transcription of the address below:

[Address of sundry Inhabitants of the Counties of Rowan and Surry to Governor Martin.]

Permit us on the behalf of ourselves and many others of his Majesty's most dutiful subjects within the Counties of Rowan and Surry to protest against any person or persons who may violate any of his Majesty's Laws or the Peace of this Government. We are truly invigorated with the warmest Zeal and Attachment to the British Constitution and Laws upon which our Lives and fortunes and the welfare of the Province now depend and we utterly protest against meetings of people against the peace thereof or anything which may give birth to sedition and insurrection. We cannot but express to your Excellency that we consider all such Associations at this Crisis of very dangerous fatality to your Excellency's good Government of this Province distress the internal welfare of this Country and mislead the unwary from the paths of their duty and we do assure your Excellency that we are determined with the assistance of God in our respective stations steadfastly to continue his Majesty's loyal subjects and to contribute all in our power for the preservation of the public peace and that we shall endeavour to cultivate such sentiments in all those under our care and warm their breasts with true zeal for his Majesty and affection for his Illustrious Family. May the Almighty God direct his Council his Parliament and all those under him that their endeavours may be for the advancement of piety and the safety, honor and welfare of our Sovereign and his Kingdom that the malice of his enemies may be asswaged, their wild designs confounded and defeated, so that the whole world may see his sacred person and Country are the special objects of Divine dispensation and Providence.

[Signed by Samuel Bryan and 194 others.]

One such statement was made by Loyalists from Rowan and Surry Counties written most likely sometime around March of 1775." data-share-imageurl=""> 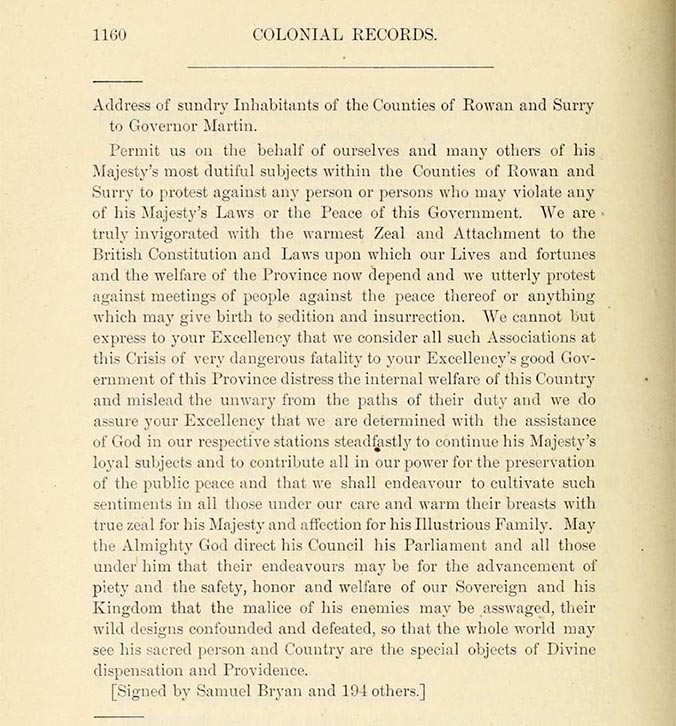 This is an image of the published text of an expression of loyalty to the British Government sent to Governor Josiah Martin by residents from Rowan and Surry Counties likely around March of 1775.  The letter was signed by Loyalist Samuel Bryan and 194 others.