In 1815, Archibald Murphey, a state senator from Orange County, entered a resolution that “it is expedient to provide more efficiently for the improvement of the inland navigation of this State” and asked that a joint committee of the Senate and House of Commons be appointed to report on the matter. Murphey headed the committee, and probably wrote most of the report himself.

As with education, Murphey believed that “internal improvements” to permit better transportation should be the responsibility of the state. Many rivers could not be navigated without canals, and the western part of the state did not have enough roads. Neither problem could be solved by individuals or small groups of people, and so the state needed to step in. Murphey proposed not only to improve transportation but to set up market towns and drain eastern wetlands for agriculture.

Many legislators, particularly those representing wealthier eastern counties, did not support spending money on improvements to transportation that would not benefit the people in their districts. Many also believed strongly that it was not the proper role of the government to build roads and canals — government, they argued, must be kept small and limited, or it would become dangerous to liberty and to the people’s welfare.

Eventually, by the 1830s, it became clear that the future of transportation was in railroads, but not until the 1850s did North Carolina embrace the need for publicly funded transportation improvements.

The committee to whom was referred the resolution on Inland Navigation, and so much of the message of his excellency the governor as relates to the same subject, Report, that the time has come when it behooves the legislature of North Carolina to provide efficiently for the improvement of the inland navigation of the state. To delay this provision, is to postpone that national wealth, respectability, and importance which follow only in the train of great internal improvements. With an extent of territory sufficient to maintain more than ten millions of inhabitants, under a system which would develop the possible resources of our agriculture, we can only boast of a population something less than six hundred thousand; and it is but too obvious that this population, under the present state of things, already approaches its maximum. Within twenty-five years past, more than two hundred thousand of our inhabitants have removed to the waters of the Ohio, Tennessee and Mobile; and it is mortifying to witness the fact, that thousands of our wealthy and respectable citizens are annually moving to the west in quest of that wealth which a rich soil and a commodious navigation never fail to create in a free state; and that thousands of our poorer citizens follow them, being literally driven away by the prospect of poverty. In this state of things our agriculture is at a stand; and abandoning all idea of getting rich, by the cultivation of the soil, men are seeking the way to wealth through all the devious paths of speculation. In this way individual prosperity contributes but little to the national wealth; and what is still more lamentable, habits of speculation are succeeding to habits of steady industry; and our citizens are learning to prefer the fortuitous gains of the first, to the slow yet regular gains of the second. This perversion of things is gradually undermining our morality, and converting the character which we bore of being industrious, enterprising farmers and thriving mechanics, into that of shopkeepers and speculators. This rage of speculation has given a fictitious value to house and lots in the several towns of the state, but has not advanced the price of lands in the country; and whilst the people, whom we have sent to work the soil of other states and territories, have raised the price of their lands from two to four fold, the price of ours has remained stationary. What is the cause of this strange condition of things? Is the soil of this state too poor to reward the labors of the husbandman with its products? Have we no navigable streams by which those products can be taken to market? We have as good a soil as any of the southern Atlantic states can boast of—fine rivers intersect our state in different directions, furnishing superior means and facilities for an extensive internal commerce, to those enjoyed by any of our neighboring states; but hitherto we have not availed ourselves of the means which Providence has thrown in our way—We have suffered year after year to pass by without seizing opportunities to improve our condition; and whilst we admit that internal improvements are essential to our prosperity, we seem to act upon a contrary principle, and to expect that national prosperity will come without national labor. It is surely worse than folly to expect the rewards of industry without its toils, or national prosperity without exertion; and we ought always to bear in mind, that it is the duty of the government to aid the enterprise of its citizens, and to afford them facilities of disposing, to advantage, of the products of their industry.

Among the various objects of internal improvement, the opening of our rivers, the cutting of canals, and the making of turnpike roads, are of primary importance, and first claim the attention of the legislature.

Six large and commodious rivers intersect this state in different directions—the Roanoke, the Neuse, the Tar, the Cape-Fear, the Yadkin and the Catawba. These rivers, with their tributary streams, water almost every county in this state; and were it practicable to adopt a general system for the improvement of the navigation of each other these rivers, and various streams which run into them, it is impossible now to calculate the advantages which would result from it. It would certainly not be improper to say, that within five years after this improvement shall have been made, the value of all the lands in the state will be doubled, and the productions of our agriculture increased three fold. Taking the value of our lands at $53,506,519, (the amount of the late assessment under the act of congress), at the end of those five years we might safely estimate the value at $107,000,000. And taking the annual productions of our agriculture at $30,000,000, which is certainly below the present amount, at the end of those five years, we might estimate their value at $90,000,000. And if we take into view the inducements which those improvements would hold out to our citizens to remain amongst us, we might well calculate, that at the end of twenty years from this time, our population would amount to 1 1/2 millions. In this estimate of national prosperity, should also be considered, the comforts and conveniences of life, which would be brought to the door of each of our citizens—the steady habits of industry which would be established, and the consequent morality which would follow those habits—And not the least of all, we should notice the abundant revenue which would accrue to the state, thereby affording the legislature the means, not only of lessening the public burthens, but of providing effectually for the establishment of schools in every section of the state, and of making ample provision for the cultivation of the sciences and the arts. Your committee deem it their duty, further to state, that those improvements in our inland navigation, would necessarily lead to the growth of three large commercial towns,--one upon the Roanoke, one upon the Neuse, and one upon the Cape-Fear.

The growth of our commercial towns is of peculiar importance to the character of the state. Whist we continue to send our products to the markets of other states, we shall be destitute of that independence of character which it should be the pride of our citizens to cherish. One species of dependence begets another: and having hitherto been dependent upon Virginia and South-Carolina, for markets for the greatest part of our produce, we have in some measure become dependent upon those states for our opinions and our prejudices. It is the duty of the legislature to contribute as far as possible to break the spell that binds us to this dependence, and so to change the political orb of North-Carolina, that she shall move as a primary and not a secondary state in the system of the confederacy. 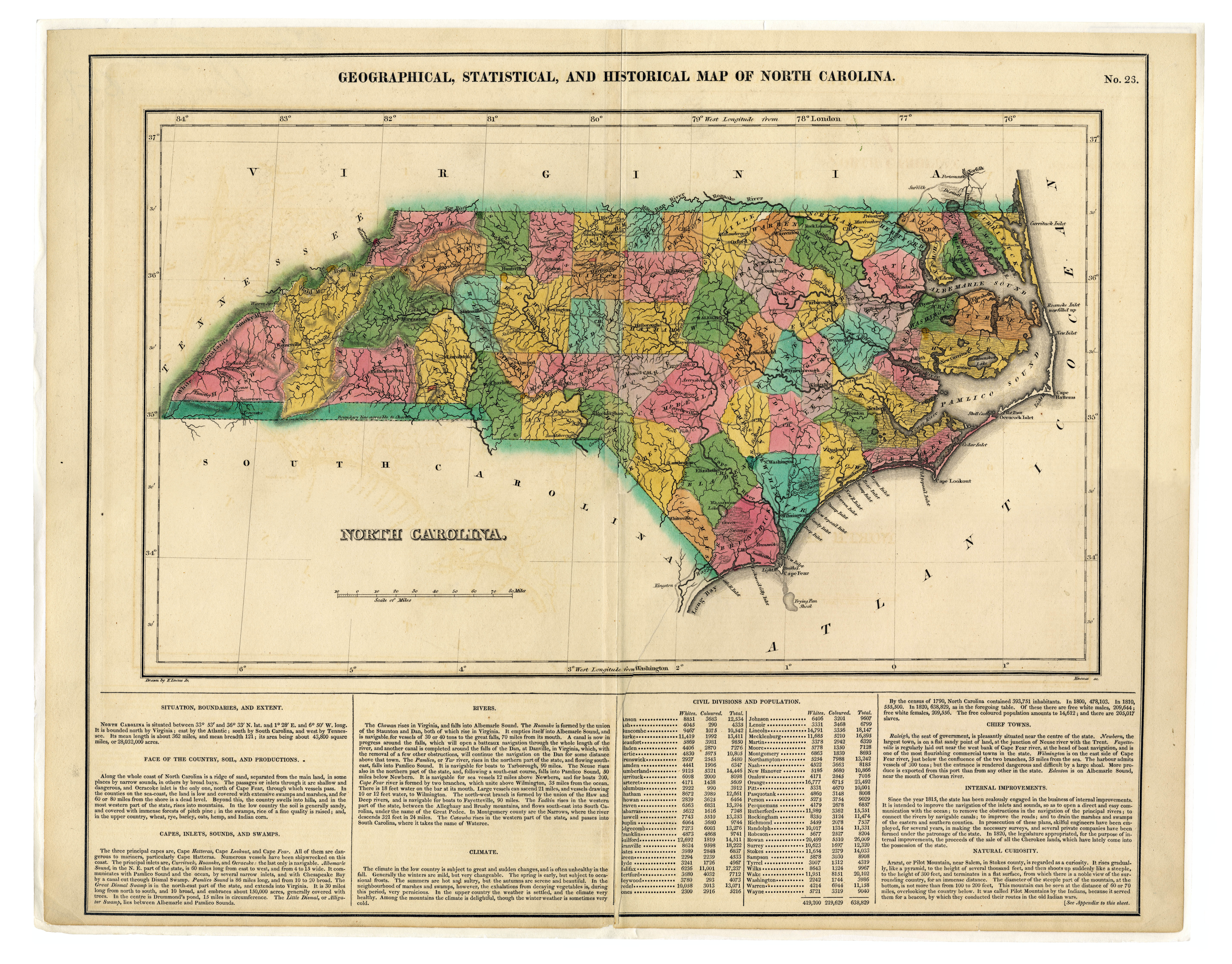 This 1821 map shows the rivers mentioned in this report.