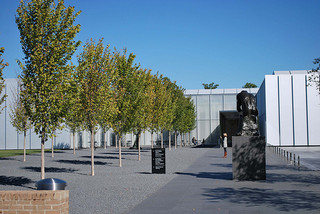 North Carolina works of art and portraiture near the end of the twentieth century took on a new dimension in museums across the country, where a number of images by both North Carolinian and regional painters widened the scope of what had been primarily local art. An exhibit, Painting in the South, planned at the Virginia Museum in 1983, was a landmark effort to bring together major southern painters. Included were twentieth-century North Carolina artists Howell, Speight, Noland, and Thomas, as well as Hobson Pittman, Victor Huggins, Vernon Pratt, Victor Faccinto, and Romare Bearden. Although the bulk of noteworthy artists in North Carolina are painters, often naturalists, the increasingly healthy artistic temperament in the state has helped foster many kinds of art, from portraiture to pottery.

North Carolina portraits are indexed at both the Frick Art Reference Library in New York City and the National Portrait Gallery in Washington, D.C. In 1963 Laura MacMillan compiled The North Carolina Portrait Index, 1700-1860 on behalf of the National Society of the Colonial Dames in the State of North Carolina. A nod to the one-time proliferation of portraiture in the state, the index documents over 500 portraits, while Cuthbert Lee's Portrait Register also touts many North Carolinians.

Within the state, both the North Carolina Museum of History and the Ackland Art Museum at UNC-Chapel Hill have outstanding collections of North Carolina portraits. UNC's Philanthropic Society pioneered portrait collecting in the state by establishing a policy of collecting alumni portraits in 1821. Among the society's first acquisitions was a portrait of Joseph Caldwell, then president of the university. The Dialectic Society soon followed in 1926 with a portrait of university founder William R. Davie. The two debating societies merged in 1974, creating the Dialectic and Philanthropic Societies Foundation, Inc., and the more than 100 portraits in the joint collection were entrusted to the foundation.

In addition to university arts programs, several organizations and institutions serve as galleries for local artists as well as resource, teaching, and outreach facilities. The North Carolina Arts Council, created in 1964, aids and supports the state's artistic community through its Visual Arts Program and in many other ways. The council also administered the Artworks for State Buildings Program, which between 1982 and 2000 brought publicly commissioned sculptures and other pieces of art to various parks, municipal buildings, and corporate offices throughout the state. Founded in the mid-twentieth century, the Sawtooth Center for Visual Art and the Southeastern Center for Contemporary Art, both in Winston-Salem, have become important centers for both established and emerging artists in the state. Other museums include the North Carolina Museum of Art in Raleigh, Louise Wells Cameron Art Museum in Wilmington, Mint Museums in Charlotte, Nasher Museum of Art at Duke University, and museums on other college campuses.