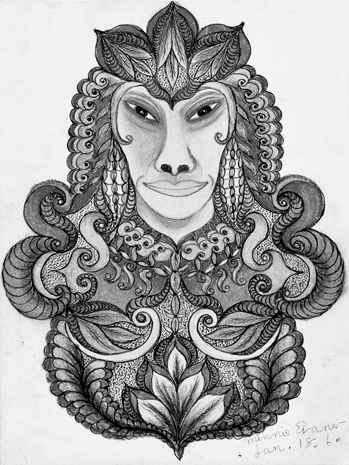 Folk artists thrive in North Carolina, evolving through self-instruction and emulation of the work of others as well as upholding traditional methods of craft passed down through the generations. Folk painting, sculpture, and pottery have strong traditions in the state, from workshop-based potters to painting steered by spirituality and mysticism. A versatile artistic spirit has moved numerous folk artists to create their own aesthetic interpretations of North Carolina, expanding the state's artistic diversity.

While a consensus definition is difficult, folk art generally refers to work done by untrained, nonacademic artists and most often involves a decorative item with minor practical use, made utilizing traditional or family methods with the intent of creating an aesthetically pleasing yet singular artistic piece. The artwork, whether a sculpture, gravestone, or model boat, rises above mere functionality.

Items traditionally produced for practical use are considered crafts, although many items that once served useful purposes are now used almost exclusively as decoration and have consequently become folk art-similar to the now-popular vein of "found" art. For instance, a rag rug woven according to styles and aesthetics passed down through generations and used as a floor covering is a folk craft. The same rug hung on the wall as an object to be viewed, however, becomes folk art through the change in its functional context. This functional change is also seen with quilts, bird decoys, and pottery. Although crafts were often ornamented to some extent, as these objects lose their functional role and become simply works of art, their creators tend to emphasize ornamentation more heavily.

Closely related to folk art is outsider art, sometimes known as naive or visionary art. Outsider art generally refers to the work of self-taught artists who function outside the mainstream of any artistic community, particularly that of an established art academy or educational program. In many cases, outsider artists have experienced economic or social disabilities that have isolated them from the "average" American lifestyle. Many do not consider themselves artists at all, nor do they typically intend to sell their work. Outsider artists distinguish themselves from folk artists in that while folk art is a tradition, passed on from generation to generation and creating something that is often practical, outsider artists create unique, pure art from a spontaneous inner drive.

Many gifted folk artists working in a variety of media are either native or adopted North Carolinians. Minnie Smith Rinehart of Catawba County was a memory painter who portrayed scenes from the rural life of her childhood. Some artists, such as painter Minnie Evans of Wilmington, are described as visionary painters since the scenes they portray arrive not from memory but from visions, often religious in nature. The images captured in vision and memory painting are impressionistic at their root; rather than a unique interpretation of a physical setting, the artists attempt to recreate the way in which inborn or spiritual forces have shaped their memories or creative consciousness.

Untrained sculptors usually work with wood or metal using skills gained in an occupational context. Clyde Jones of Bynum makes a variety of sculptures but is best known for his "critters," which he carves with a chain saw. Jones often rearranges the display of critters in his yard, frequently cannibalizing finished projects for new works, always attempting to put life into what many would see as nondescript pieces of timber. Jones's methods, and the emphasis on traditional means for most folk artists, demonstrate a tendency in folk sculptors to value process over product. Sculptor and painter James Harold Jennings, who, like fellow folk artist Raymond Coynes, hails from the Pilot Mountain area, created over 4,000 works of art, most of them during the last 15 years of his life. His work, characterized by distinctive, colorful patterns, is a mixture of Appalachian art traditions and a variety of contemporary influences such as comic books and magazines.

In North Carolina cemeteries of the late eighteenth century and early nineteenth century, stone carvers were also folk artists, adding detailed and complex iconography to tombstones. Many of these carvers were not fully professional, making their living instead through farming and carving tombstones only when the need arose. Many stoneworkers, and, indeed, many folk artists themselves, went unnamed or uncredited for their work, either as a function of a workshop environment or a natural lack of vanity. Eugene Gant's father in Thomas Wolfe's Look Homeward, Angel is a well-known stone carver. As tombstones are examples of nonacademic art in the public sphere from centuries past, many current efforts-from amateur murals to graffiti-fill the niche of public folk art.

North Carolina continues to be home to a wealth of outsider artists. Vollis Simpson builds large wind-powered sculptures called whirligigs, visible from the road near his home in Lucama. Sculptor Arliss Watford originally began carving to pass the time after his workday, displaying his works outdoors to draw attention to his television repair shop. Many involved in the league of outsider artists are collectors, who feel an affinity to the unprecedented work of artists who operate without technical training.

North Carolina Wesleyan College in Rocky Mount acquired the Robert Lynch Collection of Outsider Art in December 1987. Lynch, born in 1947 in Halifax County, attended the University of North Carolina at Chapel Hill and Harvard Law School. After working for a time as a lawyer in New York City, Lynch returned to rural North Carolina and began collecting mostly African American outsider art in the 1980s. The collection consists of over 400 pieces created by artists of eastern North Carolina. The art is on continuous display at a variety of locations on campus, and portions frequently travel to exhibitions throughout the United States.

Photographer and folklorist Roger Manley, a graduate of the University of North Carolina at Chapel Hill's curriculum in folklore, has been documenting the work of outsider artists in the South since 1970. In 1989 Manley and David Steel were cocurators of an exhibition of North Carolina outsider art at the North Carolina Museum of Art in Raleigh. Conceived to expose these artists to a wider audience, "Signs and Wonders: Outsider Art Inside North Carolina" displayed works by a small group of artists previously unknown beyond their communities. The accompanying catalog featured over 100 artists from across the state, a testament to the strength of a thriving scene that not only prides itself on its own traditional creations but fosters the creativity of all those who strive to express themselves through art.

In 1989 the folklife section of the North Carolina Arts Council developed the North Carolina Folk Heritage Awards to honor the state's folk artists. Winners range from internationally acclaimed musicians to artists quietly practicing their craft in rural and family settings. Numerous centers and organizations in North Carolina preserve and promote folk arts, including Pocosin Arts in Columbia, the Southern Highland Craft Guild and Folk Art Center on the Blue Ridge Parkway, the Penland School of Crafts in the Blue Ridge Mountains, and the John C. Campbell Folk School in Brasstown.

Robert Isbell, The Keepers: Mountain Folk Holding on to Old Skills and Talents (1999).