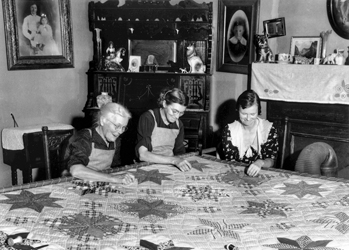 Quilts, in textile terminology, consist of two layers of fabric, frequently with some form of batting or stuffing sandwiched between them, held together by ties or stitched designs. In early North Carolina, quilts usually served as bed coverings, though sometimes they were made into clothes. As the twentieth century progressed, people came to admire quilts both for their decorative stitch work, which incorporated motifs including scrolls, flowers, and fruit, and for the beauty of the quilt tops, with their appliquéd designs or patterns rendered from geometric blocks of fabric. One quilt design popular among the Scotch-Irish settlers in North Carolina's Coastal Plain was the counterpane (sometimes called "white work"), a white, whole-cloth quilt with light batting and sometimes cording, intricately quilted so that a range of details and subtleties were revealed in different levels of light. A wonderful example made ca. 1812 by Salem Academy student Frances Lewis Graves features a center medallion framed by a leaf-formed oval, with a neoclassical vase of flowers inside.

"Quilting bees" or gatherings, during which groups of women assembled quilts, became special social events for women in nineteenth-century North Carolina. The numerous creative possibilities inherent in combining varieties of fabrics, quilting patterns, and patchwork tops gave women of all classes an important artistic arena in which to express themselves. Quilts served an economic purpose, as well, as women who could not afford to purchase wool blankets saved scraps of material to make patchwork quilts.

Unfortunately, the humid North Carolina climate, the presence of insects, and the wear and tear incurred by use resulted in the loss of most quilts made in the state in the eighteenth, nineteenth, and early twentieth centuries. North Carolina Quilters is a statewide organization dedicated to the promotion of the craft and the education of quilters interested in learning new or traditional techniques. In addition, a large number of quilt guilds exist in individual cities and towns across the state.

it was okay need more details

it was okay need more details