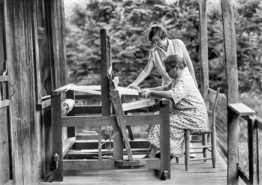 Weaving, the process of producing textiles on a loom, in North Carolina dates back to the colonial period of the state's history. From that time into the early nineteenth century, weaving functioned as a domestic or home industry in North Carolina, meaning that weavers owned their own looms on which to produce fabric necessary to make clothing, linens, and other accessories. But domestic weaving did not produce the majority of fabric used in North Carolina during this time; most was instead imported from Great Britain and Europe. Domestic production augmented the offering of imported fabrics and sometimes filled special orders.

With the advent of waterpower and steam power, weaving and other aspects of textile production were mechanized with spinning jennys and power looms. One of the first such mechanized mills in North Carolina, complete with mill "operatives" as the labor force, was owned and operated by the Fries brothers in Salem. In the twentieth century, companies such as Hanes, Cone, and Chatham dominated the national textile industry and provided employment for thousands of North Carolinians. Small-scale weavers continued to spin their wares in smaller communities and also as part of the folk arts movement that has continued to gain followers into the early 2000s.