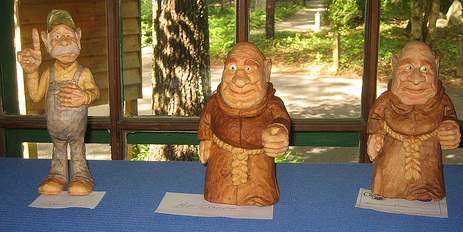 Woodcarving evolved into a true art form among North Carolinians, with works ranging from intricate caricatures and animals popular with the Cherokee and Mountain people to decoys carved by duck hunters along the Outer Banks. The Cherokees held woodcarving in high regard. Traditionally, they took up woodcarving for practical purposes such as making wooden bowls for cooking and masks for use in dances and ceremonial occasions. For leisure, the Cherokees enjoyed carving animals such as bears, deer, and snakes. They used native woods such as walnut, cherry, buckeye, holly, and apple. Cherokee carvings are distinguished by their smooth finish as well as the clear lacquer used to bring out colors and wood textures. Wildfowl decoy carving has been a folk tradition since the middle of the nineteenth century, corresponding to the rise of hunting clubs along the Outer Banks.

Efforts to conserve and support woodcarving and other traditional crafts began in earnest around the turn of the century. In 1902 George Washington Vanderbilt's wife Edith founded Biltmore Industries, a school of mountain crafts in Asheville. In 1925 Olive Dame Campbell and Marguerite Butler founded the John C. Campbell Folk School in honor of Campbell's late husband, who had always dreamed of opening such a school. The Campbell School is the oldest school of traditional crafts in the country, and woodcarving has always been one of its staple courses. Another internationally known craft school, the Penland School of Crafts, is nestled in the mountains of Mitchell County. Lucy Morgan, director of the nearby Appalachian School, opened the school in the 1920s to preserve a way of life she felt was rapidly disappearing with the onslaught of the Industrial Revolution. Penland, which incorporated in 1929 as a nonprofit educational institution, continues to shape the American crafts movement and consistently produces some of the best craftspeople in the United States. In 1961, woodworkers throughout western North Carolina and eastern Tennessee organized a guild called the Appalachian Woodworkers for the preservation of their craft.

The tradition of woodcarving continues into the early 2000s. The Qualla Arts and Crafts Mutual in Cherokee features the work of contemporary Native American carvers. One of the country's most popular caricature carvers, Tom Wolfe, maintains a studio in downtown West Jefferson. Wolfe has authored nearly 40 books on carving, and his original pieces fetch prices from $125 to over $10,000. Woodcarvings from other contemporary artists are also found along the Blue Ridge Parkway at the Northwest Trading Post, the Parkway Craft Center in Moses Cone Mansion, and the Folk Art Center.

Irv Green and Andrea Gross, Handcrafted in the Blue Ridge (1997).

Hey wondering if you could

Thank you so much for visiting NCpedia! This is an encyclopedia article about Woodcarving in North Carolina.

For woodcarver recommendations, I suggest you reach out to the NC Woodcarving Association (https://www.ncwoodcarving.com/resources/contact-us/) or the Southern Highland Craft Guild (https://www.southernhighlandguild.org/staff/). These organizations may be able to point you in the direction of artists who could complete this project for you.

Please send me up to date

Please send me up to date info concerning wood carving classes I am just starting to carve and this hobby is very interesting to me.

Many Thanks,
Rodney Boyette

You left your comment on an article on woodworking on the NCpedia, the online encyclopedia of North Carolina.  Unfortunately, we do not have information about current folk art classes in the Carolina’s.

If you are specifically interested in the John C. Campbell School or the Penland School which are both referenced in the article, their websites may be helpful.  Here are the links:

Thanks for the information!

Thanks for the information! If this website weren't here, I would be out of ideas for my culture project!