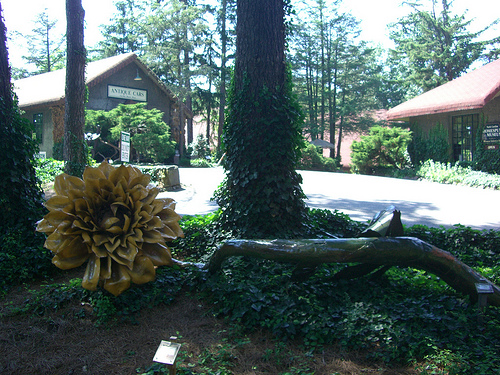 The origins of Biltmore Estate Industries can be traced to Eleanor Vance and Charlotte Yale, missionaries who moved from the North to Biltmore Village near Asheville in 1901. Both women desired to work with young people, and shortly after arriving in Biltmore they organized a Boys' Club that later became affiliated with All Souls Church. Vance taught the craft of wood carving. At about this time, George and Edith Vanderbilt of the nearby Biltmore Estate became interested in establishing an industrial school to "make it possible for native girls and boys to become productive and useful citizens of their own community." Biltmore Estate Industries was subsequently established, combining the talents of Vance and Yale with the resources of the Vanderbilts. Because George Vanderbilt was occupied with other pursuits, Edith Vanderbilt became the driving force behind the effort.

By 1905 there were 20 boys and girls in training at Biltmore Industries, and a year later the business made the transition from a cottage craft enterprise to a successful craft industry. Early products were baskets, needlework, and hand-carved articles, including small pieces of furniture and cabinets. Edith Vanderbilt was extremely interested in establishing a weaving project, and in 1907 the homespun operation began. The quality, however, was not what Vanderbilt had envisioned. Consequently, she sent Vance and Yale to study production methods in England and Ireland. In addition to returning with improved methods, they brought back a loom from Scotland as a model for the woodworking class to replicate. By 1909 Biltmore homespun had become the most popular sales item of Biltmore Industries. It subsequently became popular with several presidential families. Mrs. Calvin Coolidge selected for her wardrobe a red homespun, which became known as "Coolidge Red." Suits for President Herbert Hoover were made of "Hoover Grey," a wool blend of 85 percent black and 15 percent white material. Some of Franklin D. Roosevelt's white suits were made of Biltmore homespun. Eleanor Roosevelt was so interested in the homespun operations that she visited Biltmore Industries in 1934.

Although the Vanderbilts subsidized the business early on, Biltmore Industries had begun to make a profit by 1909. By 1921 the company claimed to be the "largest hand-weaving industry in the world." Biltmore Industries was purchased by Harry Blomberg in 1953, and the Asheville entrepreneur oversaw the operations of its looms for the next 30 years. After his death in 1991, Blomberg's heirs renovated some of the original buildings and grounds and opened a craft showplace named the Grovewood Gallery, several craft studios, and the Grovewood Cafe. By the early 2000s Biltmore Industries was still producing a small amount of high-quality wool fabrics using original equipment and techniques.