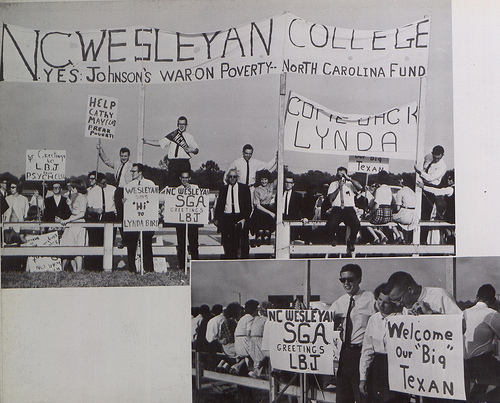 North Carolina Wesleyan College, chartered in October 1956 and opened in 1960, is a four-year, coeducational, liberal arts college in Rocky Mount. It was established by citizens of Nash and Edgecombe Counties in cooperation with officials of the North Carolina Conference of the United Methodist Church; Bishop Paul Neff Garber and the Reverend Leon Russell were among its founders. The school was named for Englishmen John and Charles Wesley, considered the founders of modern Methodism.

The main campus in Rocky Mount is on a 200-acre wooded site. In addition to bachelor of arts and bachelor of science curricula, the college offers a master's degree program in business administration in cooperation with Campbell University of Buies Creek. There are also off-campus facilities in Goldsboro, Raleigh (at Athens Drive Senior High School), Research Triangle Park, and New Bern. In 1987 the North Carolina Wesleyan College Press was established with the objective of making writings from regional authors and poets more widely available; it closed in 1995. In the early 2000s Wesleyan enrolled nearly 2,000 students through its programs.