Governor Terry Sanford created the North Carolina Arts Council in 1964 to survey the status and needs of the arts and to advance the interests of the arts in the state. The Arts Council became a state agency in 1967 and is now a division of the Department of Cultural Resources, providing technical assistance and more than 1,300 grants each year to artists and nonprofit organizations throughout the state. By the early 2000s, North Carolina had a network of more than 100 local arts councils, more than 2,000 arts organizations operating in the state, and over 34,000 artists in all disciplines.

The Arts Council is governed by a 24-member board appointed by the governor to serve three-year terms. The board includes members from urban and rural areas across the state and from diverse racial, economic, and cultural backgrounds. Members set policy for the council and serve on panels that recommend grant awards. They also work with community organizations to help them expand and develop, targeting rural areas, urban organizations in communities with limited resources, and established organizations going through transition. Through their programs, the Arts Council gives grants, organizational assistance, and guidance to the groups and individuals that make up North Carolina's arts community. The Arts Council also recognizes North Carolina's eminent folk artists through the Folk Heritage Awards, given to a wide range of artists throughout the state. 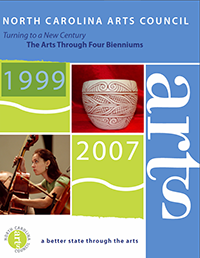 In 1977 the General Assembly initiated the Grassroots Arts Program, the first such program in the country, to fund local arts initiatives on a per capita basis and allow decision making for the spending of the funds to remain at the local level. The money is administered by the Arts Council, matched at least dollar for dollar by local funds and used for projects in schools, community colleges, and libraries as well as other programs selected by local community groups. A Visiting Artist Program was introduced in 1971-72 as a joint project with the North Carolina Department of Community Colleges, with artists becoming active participants in community colleges, technical institutes, and the community itself.

The Arts Council also established the Artists-in-Schools Program in 1971-72. While the Visiting Artists Program provided residencies at community colleges, the Artists-inSchools Program sent artists in all disciplines into the public schools in grades K-12 to teach, perform, and encourage creative expression in students during their formative years. The council was also instrumental in funding two arts-based curriculum experiments at Sunset Park Elementary School in Wilmington and Southport Elementary in Southport. The success of these programs and others has led to the development of North Carolina's A+ Schools, public elementary and secondary schools that have agreed to integrate arts with core curriculum instruction.

The General Assembly ratified legislation providing funds for commissioned artworks for installation in state buildings in 1982. From 1989 to 1995, the General Assembly designated 0.5 percent of any new or renovated state building's construction costs for artwork. Each of the artworks was selected through an open process involving users of the agency, design and arts professionals, and other citizens. Selection criteria included artistic excellence and relevance to the use, history, or character of the site, as well as safety and maintenance considerations. The Arts Council currently administers the 63-piece collection. While the Artworks for State Buildings Program no longer exists, public art sponsored by cities, counties, and private corporations can be found in parks, office buildings, and municipal facilities around the state.

The North Carolina Arts Council works closely with North Carolina's network of local arts councils across the state. The Arts Council of Winston-Salem/Forsyth County, established in 1949, is one of the oldest such organizations in the country.

In 2008, the Heritage Award program was suspended due to budget cuts.  The program was reinstated in 2014 and is held every two years.