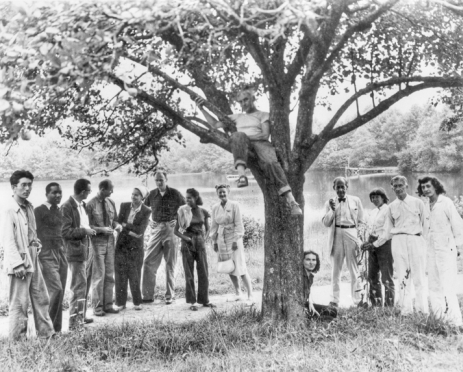 Black Mountain College, an experimental school situated near Asheville, was founded in 1933 by John Andrew Rice, Theodore Dreier, and several others who had previously taught at Rollins College in Winter Park, Fla., but who had either been fired or resigned for various reasons. Inspired by the progressive educational ideals of John Dewey, the founders developed an innovative "whole-student" concept, featuring a community that not only learned together but lived and worked (typically farming) together as well. There were no required courses, no formal graduation, and no social distinctions between the faculty and the student body. The institution was run not by administrators but by its professors and students (the latter participated in all but financial and "purely educational" decisions).

During the college's twenty-three-year existence, it had fewer than 1,200 students, of which only 55 actually graduated with formal degrees. But Black Mountain College became renowned for its commitment to individualized programs of study, creative expression in the classroom, and development of students' artistic abilities to support learning in any subject. Josef Albers, a leading figure in the Bauhaus artistic movement and an emigrant from Nazi Germany, became the school's first art teacher. Beginning in 1944, the college began offering special summer sessions in the arts, which attracted prominent artists such as Willem de Kooning and Robert Motherwell (both former students of Albers) as visiting faculty. Other professors included experimental composer John Cage and visionary inventor Buckminster Fuller, who began work on his famous geodesic dome design while teaching at Black Mountain. Albert Einstein and poet William Carlos Williams were among the school's many distinguished guest lecturers.

Throughout its history, Black Mountain College struggled to support its thriving community of artists, who were often more concerned with their own creative freedom than the practical problems of maintaining a small arts college. An influx of World War II veterans, empowered by the GI Bill to pursue their higher education aspirations, rescued the school from its funding drought during the war, but the conservative climate of the 1950s proved inhospitable to its unconventional and progressive approach to education. Despite the energetic leadership of poet Charles Olson, Black Mountain College closed in 1956.

With the encouragement of former students, many of them accomplished artists and scholars in their own right, the Black Mountain College Museum and Arts Center was erected in 1993 to commemorate the school's revolutionary principles and preserve its legacy. The Asheville facility-supported by the North Carolina Arts Council, the North Carolina Department of Cultural Resources, Western Carolina University, the Asheville Arts Council, and others affiliated with Black Mountain College-maintains exhibits, archives, and faculty and alumni collections and sponsors a variety of programs dedicated to their work.

Or, browse the online collection of photographs, bulletins and more from the State Archives of North Carolina in the NC Digital Collections.