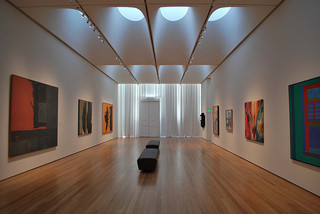 Although North Carolina's major contributions to American fine arts have been primarily in the fields of literature and music, the state's visual artists have also produced many works that have gained both regional and national attention. Without a large, ethnically diverse, and artistically fertile cultural center such as those in the Northeast and on the West Coast, the state has struggled to develop its own consistently strong and unique visual arts reputation. North Carolina's artistic heritage is far from negligible, however, and has been manifested in numerous media that slowly have grown in popularity over the centuries. Besides painting, portraiture, photography, and other visual forms, the North Carolina arts tradition is steeped in the folk ethos, diverse in its output, and, while not nationally prolific, marked by a strong sense of communal history and purpose.

The history of the state's visual arts is rooted in both its natural environment and educational heritage. Many North Carolina artists have received formal instruction but seek their inspiration in natural settings, while others develop their work based on traditional means and modes. Though the state's artists work in a number of genres, utilizing a bevy of different methods and processes, their cultural and artistic vision is intrinsically linked to their natural geography. As long as the state provides inspiring settings, artists will come, learn, and be moved to create.