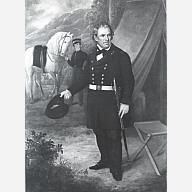 European artistic tradition graced North Carolina for the first time when John White created his documentary sketches of Native Americans at Roanoke Island in 1585. But the historical record of arts in North Carolina runs dry for the bulk of the seventeenth and eighteenth centuries. By the late eighteenth century, itinerant artists were visiting the new state, often advertising not only their willingness to do portraits but their desire to do decorative painting as well. F. J. Belanger, an immigrant from Martinique, decorated the walls of St. John's Masonic Temple in Wilmington in addition to doing portraits and profiles. William Bartram, who resided in North Carolina for a few years, wrote his famous Travels of William Bartram (1791) about his trips throughout the South, including documentary illustrations-watercolors of flora and fauna-in the tradition of White.

Itinerant painters initially found portrait subjects in early towns such as Edenton, New Bern, and Wilmington-centers of shipping, fishing, or general commerce. Some North Carolinians seeking to be immortalized in portraits turned to prominent artists such as John Singleton Copley and Thomas Sully, while others sought out local artists Jacob Marling of Raleigh, William Ranney of Fayetteville, and others. Another popular choice was William Garl Browne, a painter of numerous portraits of President Zachary Taylor, who moved to Raleigh in 1837 and continued his prolific career well into the 1880s.

In 1817, at the direction of the legislature, Governor William Miller searched for an artist to paint two portraits of President George Washington for the statehouse. English-born Thomas Sully, a Gilbert Stuart protégé, first painted the portrait of Washington hanging in the house chamber of the State Capitol in Raleigh, a copy of his teacher's Landsdowne portrait of Washington, before crafting another copy; it was saved when the building burned in 1831. The second portrait commissioned from Sully was too large for its designated place in the statehouse, so the artist released the state from the deal. That portrait, titled The Passage of the Delaware, became the property of the Museum of Fine Arts in Boston.

With Sully working on commission and Browne becoming increasingly prolific, the mid-nineteenth century was arguably the zenith of portraiture in North Carolina. Early twentieth-century portrait painters were more scarce, but they included Mary Arnold Nash and Mary Graves Rees, both of Chapel Hill. Cuthbert Lee of Asheville also painted portraits of a number of North Carolinians. Although portraiture saw regular practice in the twentieth century, it was not as prevalent as in previous centuries.

Keep reading >> Part 3: A Growing Artistic Community in the State