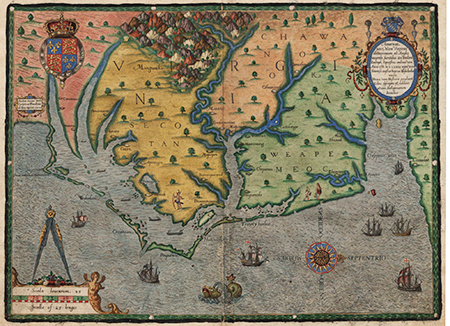 The Roanoke colonies, the result of three attempts at colonization on the eastern shores of what would become North Carolina, laid the foundation for later English colonization initiatives. In April of 1584, explorers Phillip Amadas and Arthur Barlowe set out from England to survey the coast near Cape Hatteras. In the course of their expedition, they encountered few obstacles and their positive report prompted Sir Walter Raleigh to establish a colony in the New World. In 1585, Sir Richard Grenville, Raleigh’s cousin, sent seven ships loaded with colonists and provisions to establish a colony on Roanoke Island. Although the settlement survived, poor relations with the natives and food shortages constantly plagued the colony.

After English supply ships failed to reach Roanoke Island, the colonists returned to England, and in the process missed the arrival of a re-supply ship. The ship’s crew found the colony deserted and left fifteen men at the site to await their return. They never did, and eventually the men returned to England. Two years later, Grenville sent another colonial expedition of 150 men, led by artist John White. The third colony, choosing the same location their predecessors had abandoned, saw improved relations with natives and the 1587 birth of Virginia Dare, the first child born to English parents in the New World. Soon after Dare’s birth, White returned to London to secure more provisions for his fledgling colony, only to return three years later to find the colony abandoned, with no trace of inhabitants and most structures destroyed. The vanquished settlement is often referred to as the “Lost Colony,” a story retold each summer on Roanoke Island in Paul Green’s outdoor drama.

Although the first English colonies were unsuccessful, the attempts brought attention to the dangers inherent in creating a new society in a foreign world, and laid a course for future colonists.

yes huh the roanoke and

yes huh the roanoke and jamestown lesson is interesting

What date was this posted? I

What date was this posted? I need to know for a project. I am going to use this as one of my sources but I need to cite it with the date it was published. Thanks so much.

Date of the article says 2007 near the authors name under the title.

I like the lost colony storeis beacuse it so mysterios.

what does Roanoke island look

Hi, thank you for the

You also can get a very good look at Roanoke Island from the Dare County GIS group here: https://community.darecountync.gov/

Hi! I’m doing a school project on Roanoke. Were there foundations left from the buildings? Or were those gone too? Thanks!