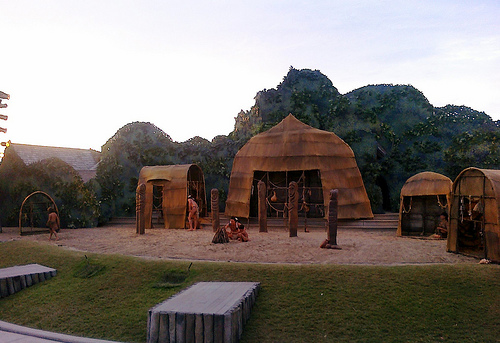 History is full of mysteries. But perhaps none have held more interest or spawned more theories than John White’s disappearing 1587 colonists. Thousands of books, documents, letters, essays, and reports have been written about the legendary Lost Colony of Roanoke Island. Author and playwright Paul Green’s outdoor drama The Lost Colony offers one version of this North Carolina story. The drama began as a one-season performance to celebrate the birthday of Virginia Dare—the first English child born in the New World. It has turned into an annual event enjoyed by millions of people of all ages, local residents and visitors alike. Since its debut in 1937, the show has been performed night after night during the summer.

The Lost Colony grew from a combination of romantic ideas, curiosity, and a strong desire to tell an important story close to home. In 1921 Mabel Evans Jones, the Dare County school superintendent, produced a silent film about the Lost Colony, distributing it to North Carolina schools. “Miss Mabel” would create the first visual icon of colonist Eleanor Dare holding her baby daughter, Virginia, which has become the longest-lasting symbol of the spirit of the story. The film inspired pageants with costumes and celebrations in the 1920s and 1930s, as local residents played various roles to help celebrate the anniversaries of Virginia’s August 1587 birth. Outside of the local community, however, most people ignored the legend of the Lost Colony. By the beginning of 1937, with the 350th anniversary of the birth quickly approaching, the people of the Outer Banks wanted more people to recognize the importance of this event.

The Roanoke Island Historical Association’s Bradford Fearing and W. O. Saunders led the community effort to have this history mystery dramatized. They turned to North Carolina native Paul Green (1894–1981) to write it. Green—who had won a Pulitzer Prize in 1927 for the first of his several Broadway plays—was a natural for the job. On January 18, 1937, he signed a contract with the Roanoke Colony Memorial Association of Manteo to deliver a pageant drama entitled The Lost Colony. Green’s colleagues, the Carolina Playmakers of UNC-Chapel Hill, helped with production and provided a director. Works Progress Administration sewing rooms in Dare County were used to construct the costumes. Members of the Civilian Conservation Corps camp in Manteo helped Skipper Bell build a home for the play, the Waterside Theatre, and filled the stage as extras. (President Franklin Roosevelt had started the WPA and CCC in April 1935 to create jobs on public projects during the Great Depression. Roosevelt himself attended a show in August 1937.)

The original plan called for The Lost Colony to be performed for the 1937 summer season as part of the yearlong celebrations honoring Virginia’s birth. According to written contracts that survive, however, it appears that the play soon was intended to be more than a one-season event. Before the summer of 1938, letters already were pouring in requesting that the drama continue for more than a season, and some important people probably wanted it to continue.

Over its seventy-year history, The Lost Colony has gone through many changes in artistic style. It has survived such events as war, hurricanes, and a fire that destroyed the Waterside Theatre. The early staging, costumes, and music were simple by today’s standards but in style at the time. Audiences began coming from across the country with different expectations and ideas. As society changed, the show had to keep up. One way was through new costume designs. The original costumes were created from donated and inexpensive fabrics. In the 1960s the costumes became much brighter, using more popular colored fabrics. To shake things up, The Lost Colony team has sometimes hired such Broadway greats as production designer Joe Layton and, more recently, five-time Tony Award–winning costume designer William Ivey Long. Beginning in 1964, Layton created a seamless, nonstop sequence of color, verse, music, dance, drama, and pantomime. In the late 1980s Long began using colors and fabrics that were more historically accurate.

Other changes over the years have included scenery upgrades and the introduction of microphones and other technologies. The modern sound systems and equipment used today were not available for decades.

As one reads The Lost Colony script or visits Roanoke Island to see a live performance, it is important to remember that the play, as historical fiction, offers just one view of an event. Writers of books, dramas, and movies often struggle to balance historical accuracy with telling a good story. One could say there are many historical inaccuracies and assumptions in Green’s script. While many of the characters are actual historical figures, Green did take a romantic approach, turning most of them into “good guys” and “bad guys.” For example, scholarly research tells us that the colony’s governor, John White, did not possess 100 percent virtuous character traits, as Green would have us believe. In the play, White seems very happy and obliging to return to England to get supplies and more colonists. From historical documents, however, we now know that the whole colony had to persuade him to return home.

Green drew from what was known in 1937 as he wrote his script, “improving” the story to the point that he knew he would have a successful play. He created a piece of theater with an exciting story, believable plot, and characters that are clearly heroes or villains. In recent years, people working on The Lost Colony have tended to change the play to make the story as accurate as possible. Green spent decades rewriting and refining his script.

Today The Lost Colony continues to be the longest-running outdoor symphonic drama in the United States. What happened to the real men, women, and children may never be known.