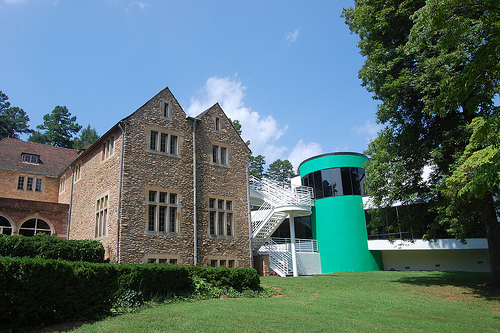 The Southeastern Center for Contemporary Art (SECCA), located in Winston-Salem, serves as a nonprofit community resource and revolving exhibit space for American contemporary art. SECCA is dedicated to encouraging scholarship and research in contemporary art as well as supporting the creation of new artworks. It began in 1956 as an exhibition space devoted to work by local artists. The center received a new home when industrialist James G. Hanes willed his 32-acre estate to SECCA in 1972. Renovation of Hanes's mansion, plus construction of a gallery addition and receiving area, was completed in 1976. During this period SECCA initiated an artist support program, the National Endowment for the Arts/SECCA Southeastern Artists Fellowships (later known as SECCA/R. J. Reynolds Artists Fellowships). SECCA expanded that program nationally in 1981, initiating the Awards in the Visual Arts (AVA). For ten years, AVA awarded artists fellowships along with funding museum exhibitions and a purchase program.

In 1990, with a new 24,500-square-foot addition, SECCA shifted its focus to exhibiting the work of major contemporary artists around the country while maintaining a commitment to southeastern artists. Completion of the McChesney Scott Dunn Auditorium enabled the center to offer programs in contemporary music, drama, dance, and film as well as lectures and conferences on contemporary art issues. In 1994 SECCA initiated the Artist and the Community Project. Structured as a series of residencies resulting in the creation of new work, participating artists focus on issues critical to the local community. Working with other community-based institutions from schools to social service agencies, the program forges a link between artists and community members.

SECCA continues to present the diversity of American contemporary art and encourage creative excellence in the visual arts. A distinctive feature of SECCA's galleries is their illumination by natural light showing through wall-sized glass windows, designed so that no artwork falls prey to the sun's potentially injurious rays. The center offers 21,000 square feet of exhibit space and a 300-seat auditorium.

SECCA at times has come under fire from religious groups and members of Congress, such as retired U.S. senator from North Carolina Jesse Helms. Helms and others, angered by work that they considered blasphemous or pornographic, demanded greater accountability by the National Endowment for the Arts (NEA) and threatened to slash NEA budgets. For instance, great outcry arose in 1989 over a 40 × 40-inch photograph by New York's Andres Serrano, who received $15,000 for his work from the NEA through SECCA. The photograph, titled Piss Christ, shows a wood and plastic crucifix submerged in the artist's urine. The artist said that his work was "not meant to be an attack on Christ [but was] questioning organized religion and the commercialization of Christ."

The State of North Carolina formally took over the operations of SECCA on December 13, 2007. SECCA operates as an independent entity as an affiliate of the North Carolina Museum of Art, under the N.C. Department of Cultural Resources.

Parachini, Allan. "In the Eye of the Storm : Inside the North Carolina arts foundation that's under fire for sponsoring a tour of 'offensive' artworks" Los Angeles Times. August 13, 1989. http://articles.latimes.com/1989-08-13/entertainment/ca-799_1_north-carolina-arts (accessed October 24, 2012).