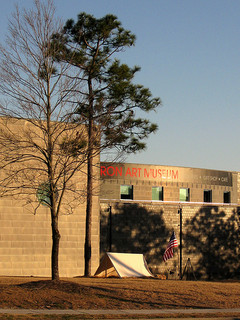 Lodge at 114 Orange Street in Wilmington as the St. John's Museum of Art. The building had been designed to house St. John's Lodge No. 1 of Ancient York Masons and the Grand and Royal Chapter of Jerusalem, commonly called the Royal Arch. Between 1825 and 1943 the building-Georgian style with Federal modifications-was the private residence of Thomas W. Brown and his heirs. The most striking interior decoration was an allegorical overmantel of Masonic emblems. The restoration of this mural was carried out by Claude Howell, a local artist and one of the founders of the museum. By the 1990s, the St. John's Museum complex actually included St. John's Lodge (1804), the oldest lodge in North Carolina, which housed a permanent collection including 13 Mary Cassatt prints and a shop selling the works of 80 North Carolina artists; the Burch-Cowan House Studio (1830), formerly one of the state's oldest public schools, which featured educational programs and art classes; and St. Nicholas Greek Orthodox Church (1943), named the Samuel H. Hughes Gallery, which housed changing exhibitions.

A drive for a new facility began in September 1997, when the Bruce B. Cameron Foundation, Inc., gave St. John's Museum of Art a $4 million grant-the largest grant given to a cultural organization in Wilmington's history-toward a project expected to cost about $11 million. The children of Bruce Cameron and the late Louise Wells Cameron at the same time donated land valued at more than $2 million to the museum in memory of their mother, whose name the museum now bears. Charles Gwathmey, of Gwathmey Siegel & Associates Architects in New York and a Charlotte native, was chosen as architect for the project. Gwathmey is perhaps most noted for his renovation and addition to the Solomon R. Guggenheim Museum in New York, as well as three projects in North Carolina: the Thomas I. Storrs College of Architecture at UNC-Charlotte, the Center for Jewish Life at Duke University, and the IBM Office Building and Distribution Center in Greensboro.

The Louise Wells Cameron Art Museum-which opened in new quarters at the intersection of Independence Boulevard and 17th Street in April 2002, two years after groundbreaking-is dedicated primarily to collecting, preserving, and exhibiting the art of North Carolina. The museum contains more than 700 works, representing a unique collection of work by the state's artists, from visionary painter Minnie Evans to Howell. The 42,000-square-foot, state-of-the-art facility features a permanent collection of North Carolina and American art from the eighteenth century to the present, color prints by Mary Cassatt, and a sculpture garden. The museum offers temporary exhibitions, educational and outreach programs, and invitational exhibitions for the Cape Fear region's artists. Its 9.6-acre campus also features recently restored Confederate defensive mounds built by Clingman's Brigade during the Battle of Forks Road, which preceded the fall of Wilmington in the last days of the Civil War.