William Garl, Jr. Browne (Brown), Victorian portrait painter, was born in England, the son of William G. Browne, Sr., English landscape and genre painter who worked in the United States from about 1837 to about 1861. The younger Browne exhibited a portrait at the National Academy in 1840, shortly after arriving in the United States with his father; he is believed to have lived in New York during this period. In 1846, "William G. Brown, of London" advertised a portrait-painting studio at 146 Main Street, Richmond, Va., in the Richmond Whig. Browne earned instant, national fame through the public exhibition of a collection of portraits of General Zachary Taylor and his staff, painted at U.S. Army headquarters in Mexico during the summer of 1847. The portraits were shown in Washington, New York, and Baltimore in the fall of 1847 and received critical acclaim in major newspapers for their lifelikeness. With a national reputation at the age of twenty-four, Browne chose to spend his career in the South. Several hundred portraits of southern subjects are known (see the catalogue raisonné at the North Carolina Museum of Art), and at his death it was estimated that he had painted over a thousand portraits during his sojourn in North Carolina alone; but the full extent of his oeuvre remains a mystery because of his itinerant career. 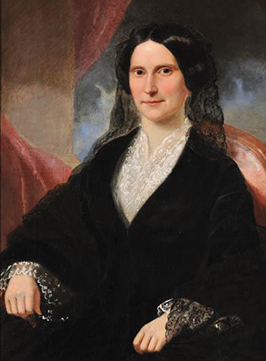 During the 1850s, Browne traveled throughout the South, apparently without a permanent home. He must have worked extensively in North Carolina, for a large number of signed and dated portraits of North Carolina subjects remain from this period. The Federal Writers' Project (1942), Raleigh, Capital of North Carolina, states that Browne opened a studio on New Bern Avenue in 1860, and according to the artist's obituary in the Richmond Times, he resided in North Carolina during the war. Numerous signed and dated portraits of North Carolinians are extant from the war period, also. Browne is said to have been the designer of the North Carolina state flag, created during the constitutional convention of 1861, and he must therefore have had access to Raleigh at that time. According to Grimes family tradition, Browne had a studio in the backyard of the William Grimes home in the 400 block of Halifax Street, Raleigh, in about 1865. There are only two documented references to a Browne residence in Raleigh: in 1872 he advertised in the Daily Sentinel, a Raleigh newspaper, "Life-size pictures painted from life, Photographs or Daguerotypes," executed in his studio at 15 Fayetteville Street; and the Raleigh city directory of 1875–76 listed his studio and home as 13 Fayetteville Street.

The artist seems to have added the final "e" to his name in later life, for references from 1846 and 1847 and the Raleigh references of 1872 and 1875–76 spell his name "Brown." Sources conflict concerning the number and identity of Browne's wives. His obituary states that he had two wives: the first a Lynchburg woman who died soon after their marriage and the second a Miss Seabrook. Other sources mention only one wife, Mary McFeely of Charleston, whom he supposedly married in 1876. All sources agree that he had four children.

Browne set up a studio on Franklin Street, Richmond, and painted there from the 1880s to 1894, when he died during a visit with his sister in Buffalo, New York. He was buried in Forest Lawn Cemetery in Buffalo.

Famous for his warm and richly executed portraits of social, military, and political personages of his era, Browne painted in a fluid, realistic style that contrasted sharply with the naive techniques of most of the American portraitists who were his contemporaries. Browne left portraits of North Carolinians signed and dated from the 1840s through the 1880s, which are now owned by private individuals, usually descendants of the subjects, throughout the state and by institutions including the North Carolina Supreme Court, the North Carolina Division of Archives and History, the North Carolina Museum of Art, the Chapel Hill and Greensboro branches of The University of North Carolina, Davidson College, and Wake Forest University. His subjects, men and women prominent in state affairs, include Governor and Mrs. John Motley Morehead, Willie Person Mangum, Mr. and Mrs. Edwin Michael Holt, David F. Caldwell, Governor and Mrs. William A. Graham, Governor James Iredell, Richmond Pearson, Bartholomew F. Moore, Robert Strange, and many others. The known extent of Browne's oeuvre is constantly being enlarged through research, and his position as one of North Carolina's best known and most significant nineteenth-century artists is firmly secured.

National Portrait Gallery (Washington, D.C.) for the entry on Browne from the Catalogue of American Portraits.

Valentine Museum, Richmond Portraits in an Exhibition of Makers of Richmond (1949).

A. W. Weddell, Portraiture in the Virginia Historical Society (1945).