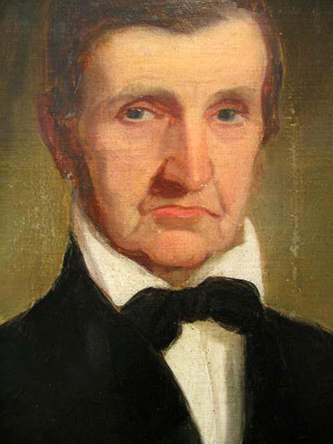 David Franklin Caldwell, lawyer, legislator, and judge, was born of Scotch-Irish ancestry in the eastern section of Iredell County. He was the son of Andrew Caldwell, an early settler of this region who often represented his county in the legislature. His mother was Ruth, the second daughter of William Sharpe, a member of the Continental Congress and of the Rowan Committee of Safety. David's siblings included two widely known brothers: Joseph P., congressman, and Dr. Elam of Lincolnton.

Caldwell pursued the literary course at The University of North Carolina, studied law under Archibald Henderson of Salisbury, and entered public life as a member of the legislature from Iredell County in 1816–19 and in 1825.

After completing his last term in the legislature he moved to Salisbury to practice law and soon became an active participant in the public affairs of Salisbury and Rowan County. He presided at the Fourth of July celebration in 1828, became a director of the Rowan County Chapter of the American Colonizing Society, and in July 1828 was appointed president of the Salisbury branch of the state bank upon the resignation of John L. Henderson. In 1829 he represented Rowan in the senate of North Carolina; in December he was elected speaker in place of Bedford Brown, who was elected to the U.S. Senate.

At the end of his term in the senate, Caldwell returned to Salisbury. There he again took up the practice of law, while engaging in the political contests of the day as a Whig and strong Unionist. His stand on Unionism involved him in an aborted duel with Charles Fisher, a Democrat, in 1833. In 1830, Caldwell helped to mediate a peaceful settlement between Governor John Owen and Senator Willie P. Mangum.

In July 1844, Caldwell was nominated by Governor John M. Morehead to the superior court bench, to fill a vacancy occasioned by the appointment of Judge Frederick Nash to the state supreme court. As a judge he presided with rare dignity, grace, discrimination, and impartiality. On 18 Jan. 1860 he offered Governor John Ellis his resignation, saying: "I cannot discharge the duties of President of the branch Bank about to be located at this place and the office of judge. At my time of life I prefer the former." So Caldwell relinquished the bench for the bank and held his position there until the outbreak of the Civil War.

Caldwell was twice married. In 1810 he married Frances M. Alexander, the daughter of William Lee Alexander and niece of Archibald Henderson. By this union he had six children: William Lee; Archibald Henderson; Elizabeth Ruth, who married Colonel Charles Fisher; Richard Alexander; Dr. Julius Andrew; and Fanny McCay, who married Peter Hairston. In 1835, Caldwell's first wife died, and in 1839 he married Rebecca M. Troy, widow of Matthew Troy and daughter of William Nesbit. She died in 1855 and was buried beneath the Session House of the First Presbyterian Church in Salisbury. Caldwell was buried in an unmarked grave beside his first wife in the old Lutheran Cemetery in Salisbury.