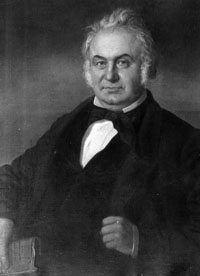 John Motley Morehead (1796-1866), builder of the magnificent “Blandwood” estate in Greensboro and the first governor inaugurated in the present Capitol, presided over an era of industrial development and, after his term, promoted construction of the North Carolina Railroad.  The son of John and Obedience Motley Morehead, he was born in Virginia on July 4, 1796, but his parents moved to Rockingham County when he was two.  Young John studied at David Caldwell’s school near Greensboro and then entered the University of North Carolina with the class of 1817.  He completed his education by studying law with Archibald D. Murphey and set up an office in Wentworth in 1819.  In 1821 Morehead had married Ann Eliza Lindsay of Greensboro; they would have eight children.

Morehead represented Rockingham County in the 1821 session of the House of Commons and Guilford County for two successive sessions beginning in 1826.  His political views were honed by residency in a then western county and his early association with the visionary Archibald D. Murphey.  Owing to the former he witnessed the domination of a majority by a minority with special interests and the need for constitutional reform, and from the latter he had learned of the potential benefits of internal improvements, a stronger banking system, expanded education, and a government active in the public sector.  As a delegate to the 1835 Constitutional Convention, he sided with his fellow westerners and fought for legislative representation based on population.  As a proponent of education and the father of five daughters, he took upon himself the establishment in 1840 of Edgeworth Female Seminary.

Morehead’s activity and high visibility made him a logical choice of the Whig Party which sought to continue the progressive program begun during the previous administration.  Though popular enough to be elected governor in 1840 and again in 1842, Morehead found himself facing a legislature controlled by conservative Democrats.  He pushed for a broad program of internal improvements but made little headway.  His one achievement was a law establishing a school for the deaf.  The blind, whose education he also advocated, were not admitted until years later; nevertheless, the long operating school for the sight-impaired still bears his name.

After his terms as governor, Morehead became the state’s foremost promoter of railroads, particularly the North Carolina Railroad of which he served as president from 1850 to 1855.  To him must go much of the credit for its construction.  He also invested in a cotton mill at Leaksville and other manufacturing enterprises, and he was on the board of trustees of the University of North Carolina.  Morehead again represented Guilford County in the House in 1858-1859.  He returned for the next session as a member of the state Senate.  As the secession crisis mounted, Morehead favored maintaining the union and attended the Washington “Peace Conference” hoping to avert the impending conflict.  With its failure, he viewed secession as an unavoidable necessity and threw his allegiance to the South.  He was elected as a delegate to the Confederate Provincial Congress in 1861 and served until it completed its work in 1862.  His public service to his state was over, and he returned to Greensboro where he died four years later on August 27, 1866.  His grave remains in the yard of the First Presbyterian Church.