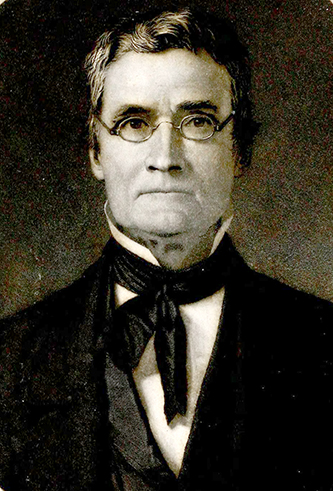 Frederick Nash, fourth chief justice of North Carolina, was born in the former colonial governors' palace at New Bern, the son of Governor Abner Nash and his second wife, Mary Whiting Jones. Young Frederick grew up with his brother and three sisters at Pembroke, the Nash plantation on the Trent River near New Bern. His father's death in 1786 and his mother's death thirteen years later left young Frederick as the head of his family. He studied under the Reverend Henry Patillo at Williamsboro and under the Reverend Thomas Irving at New Bern. In 1799 he was graduated as salutatorian from Princeton College. Returning to New Bern, Nash studied law under Edward Harris and was admitted to the bar in 1801. He represented New Bern in the House of Commons in 1804 and 1805.

In 1803 he married Mary Goddard Kollock of Elizabethtown, N.J. Seeking a healthier climate after the loss of their first child, they moved from New Bern to Hillsborough in 1807. Nash represented Orange County in the House of Commons in 1814, 1816, and 1817 and the town of Hillsborough in 1828–29. In 1814 he was speaker of the house.

Nash was elected a superior court judge in 1818 and held the office until 1826, when he resigned to resume his lucrative private law practice. In 1836 he again won election to the superior court, serving until Governor John Motley Morehead elevated him to the North Carolina Supreme Court in 1844 to complete the term of Judge William Gaston. This interim appointment was confirmed when the legislature elected him Judge Gaston's successor.

In 1852, on Judge Thomas Ruffin's resignation, Nash became chief justice of the supreme court; he continued in this office until his death six years later. According to his friend, Dr. Kemp P. Battle, "He proved himself a sound and able judge, and his lofty character, in which all the virtues were harmoniously blended, his great popularity gained by his unfailing courtesy and kindly heart, continued and strengthened the public confidence in the court."

Elected a trustee of The University of North Carolina in 1807, Nash remained an active supporter of the university, from which he received an LL.D. degree in 1853. Although raised in the Episcopal church, he and his wife became ardent Presbyterians around the turn of the century. For nearly fifty years they were among the leaders of the Presbyterian church in North Carolina. Nash suffered his last illness on returning from a meeting of the synod in New Bern. He was buried in the old Presbyterian cemetery in Hillsborough.

Two incidents in his early youth were cherished by Judge Nash. When President George Washington visited New Bern in 1791, he was honored by a reception and ball at the old palace. Mrs. Abner Nash presented her ten-year-old son to the president, who took him on his knee and spoke kindly to him, recommending to the boy his uncle, General Francis Nash, as an example for his life. Eight years later, when his mother was dying, she placed her hand on her son's head and said to her attending physician: "Dr. McClure, here is a son who has never given me one moment's pain." His friends believed that these two incidents, combined with the early burden of family responsibility, helped to form the serious and responsible man he later became.

A portrait of Judge Nash hangs on the wall of the supreme court chamber in Raleigh.

"Social Reminiscences of Distinguished North Carolinians," The Land We Love 5 (1865).

I believe NASH and wife MRy G. Kollock had eight, not seven kids:there are seven you mention in the article, and an eighth who died in infancy in ca. 1804--reread your second paragraph above.

As a point of clarification, Judge NASH becomes a founding member of the Hillsborugh PresbyterIan in 1816. Along with Judge NASH in the Old Town Cemetery of Hillsborough are his wife Mary, and kids Susan Mary Read, and Ann Eliza Strudwick,