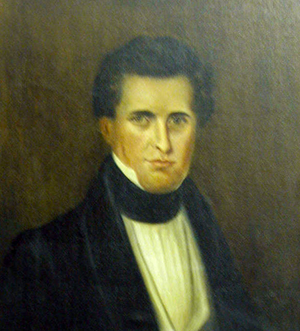 Edmund Charles Fox Strudwick, physician, was born at Long Meadows, the family home near Hillsborough, the second son of William Francis and Martha Shepperd Strudwick, who had three sons and two daughters. His grandfather Samuel Strudwick, the first of the family in America, had come to North Carolina to claim two vast tracts of land deeded to him, his brother, and his sister by George Burrington, a former governor of the province, to cover a debt owed their father, then deceased, an earlier Edmund Strudwick. One tract was 10,000 acres in New Hanover County called Stag Park, the other 30,000 acres in Orange County in the Haw Oldfields (Hawfields), on each of which Samuel Strudwick established a plantation home.

Dr. Edmund Strudwick received his early schooling at William Bingham's Hillsborough Academy. At his father's death in 1810, Dr. James Webb, a physician, became his guardian, a relationship that may have influenced the course of Strudwick's life. He took two years of lectures at the medical school of the University of Pennsylvania, where Webb had studied, and received his degree in 1824. He then spent two additional years in an internship at the Philadelphia Almshouse and Charity Hospital before returning to Hillsborough to practice.

For over fifty years this commanding, handsome, and revered figure rode the muddy country roads at all hours and in all weathers to treat the sick, or he traveled to distant parts of the state for consultations and operations. He also cared for particularly sick or difficult cases at his home (a common practice of the day), where they remained until they recovered or died. Surgery, still in its infancy, was his specialty, though the bulk of his practice was general medicine and obstetrics. Like all doctors of that time he mixed his own prescriptions, often made from medicinal plants of the field, and dispensed his own drugs.

He never held public office and no medical writings of his survive. Only the semi-legendary lore that unusual character attracts remains to tell of him: his faithful attention to his patients, his unfailing cheerfulness of temper, his inveterate tobacco smoking (six pipefuls before breakfast), his indefatigable search for knowledge through the reading of medical literature even as he rode out on his far-reaching rounds, and his unflagging physical stamina despite the heavy demands of his profession.

Strudwick was one of a group who reestablished the long defunct North Carolina Medical Society, which Dr. Webb had founded in 1799, and became the first president of the new organization in 1850. His address to that body contained the fruit of his reading and thinking about his profession. He advocated high qualifications for admission to medical school after long precollegiate schooling, as well as postgraduate study and internship to perfect the physician's training. He stressed the importance of autopsies to medical knowledge and advocated the exchange of information through means of professional societies and publications. Medical laboratories and museums he urged be set up to serve as valuable adjuncts to the study of medicine.

When offered the superintendentship of the State Hospital for the Insane after its establishment in 1849, Strudwick refused the position. He gave freely of his time, however, in advising and supervising during the seven years of the hospital's construction.

In politics he was an ardent Whig and in religion a Presbyterian; he served as an elder in the Hillsborough church. From his father he had inherited over one thousand acres of land and many slaves so that he was comfortably fixed financially until the Civil War, which left him in straitened circumstances. Strudwick refused to take advantage of the homestead act by which he might have salvaged his home and some land. Instead, he moved to very modest quarters, where he lived out his life.

His accidental death at age seventy-seven was a result of poisoning. He drank by mistake from a glass containing atropine, a portion of which had been administered to his sick son, and died the same day. He was buried in the old town cemetery in Hillsborough beside his wife, who had predeceased him. She was Ann Elizabeth Nash (24 Sept. 1808–26 Sept. 1877), the daughter of Judge Frederick Nash and his wife Mary Kollock Nash. The Strudwicks had five children: William Samuel, Frederick Nash, Edmund, Jr., Martha, and Mary. William and Edmund became physicians, but Martha and Mary died in childhood.

A portrait of Dr. Strudwick by an unknown artist was used for the copy painted by Strudwick's granddaughter, Mrs. W. T. M. Van Plancke, which the family presented to the State Hospital in Raleigh.

Strudwick, Edmund. An address before the Medical Society of the State of North Carolina : at its first annual communication, in Raleigh, April, 1850. Raleigh : William W. Holden. 1850. https://archive.org/details/addressbeforemed00stru (accessed March 12, 2013).

Strudwick, Edmund. "Remarks upon the stethoscope and its use in Phthsis pulmonalis." The Philadelphia Journal of the Medical and Physical Sciences 8. 1824. 33-52. http://books.google.com/books?id=qtYafRepXqkC&pg=PA33#v=onepage&q&f=false

Nash, Frank. "Edmund Strudwick: man and country doctor: an address delivered on the occasion of the presentation of a portrait of Dr. Strudwick to the State Hospital at Raleigh, December 14, 1926." Raleigh [N.C.]: Edwards & Broughton Co. 1927.