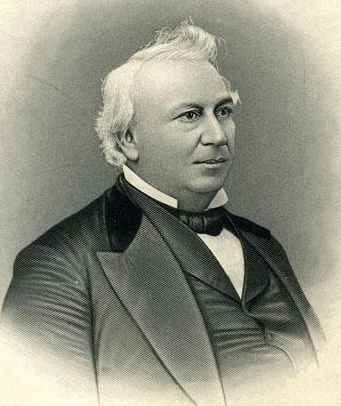 Edwin Michael Holt, industrial pioneer and planter, was one of six children born to Rachel Rainey and Michael Holt III in Orange (now Alamance) County. His father's ancestors had emigrated from Germany to England before settling in Spotsylvania County, Va., and later in North Carolina. Michael Holt III was an influential state representative and senator who operated a stagecoach stop at his home on the Hillsborough-to-Salisbury route. In addition to his plantation, he managed a store, gristmill, woodworking shop, sawmill, distillery, and blacksmith shop. Experience with his father's business ventures encouraged Edwin's industriousness and versatility. Despite little formal education he was a good businessman, and he learned to accept responsibility while supervising wagons that took produce from his father's plantation to market in Fayetteville, Hillsborough, and elsewhere.

A Greensboro cotton mill stimulated Holt's interest in building a mill on Alamance Creek where his father operated a gristmill. Although the elder Holt at first refused to be a partner in the venture, William A. Carrigan, husband of young Holt's aunt, Nancy, agreed to participate. When Michael Holt learned that Judge Thomas Ruffin approved of the project and had even offered to provide capital, he offered his son both capital and waterpower. Holt and Carrigan refused the capital but agreed to buy waterpower from Holt's father. Securing timber and rocks from their farms and making their own bricks, they used slave labor and hired carpenters when necessary. The mill was built and a few houses were erected for the workers. Under the name Holt and Carrigan Cotton Mill, operation began in 1837 with 528 spindles processing yarn. Holt managed the factory while Carrigan operated the store. Despite difficulties encountered when rising water flooded the mill, the firm continued to use waterpower until after 1870. Holt and Carrigan also operated a second store in Hillsborough, and factory and farm products were shipped by wagon to Hillsborough, Fayetteville, and Salisbury as well as to Petersburg and Clarksville, Va. The 1842 inheritance from Michael Holt's estate increased the capital of the Holt-Carrigan firm, which subsequently built an addition to the factory, more workers' houses, and a yarn house. By 1849, twelve looms produced cloth selling for six and seven cents per yard.

After the death of his wife in 1841, William Carrigan decided to sell his partnership to Holt and move to Arkansas in 1851. As a result, Thomas M. Holt returned from business school in Philadelphia to help his father in the mill. It was he who later explained how the famous Alamance plaids, the first goods to be woven of colored yarn south of the Potomac River, came to be produced. By 1854 the mill could hardly keep up with the demand for goods, and was selling quantities of yarn, sheeting, and osnaburgs. By 1860, the Alamance Cotton Mill, as it was known then, had sixty female and eight male employees, and a tax value of $57,000.

Though Holt opposed secession when the Civil War began, he and his sons contributed greatly to the war effort. William, Alexander, and Banks Holt served in the Confederate Army, but William was recalled in 1861 to manage the mill at Alamance for his father, while Thomas took over the Granite Mills on the Haw River. Both Edwin Holt and his brother William, who was a physician in Lexington, believed that the need for cotton would eventually bring European aid for the South, and Edwin considered it strange that England and France did not recognize the Confederacy. During the war the Holt mills produced goods both for the army and for personal use, despite the difficulty in securing materials needed for operation. By 1870 the value of production of the Alamance mills was $73,625, including the manufacture of yarns, sheeting, plaids, ticking, and frilling. After the war, Holt turned over the management of the Alamance Cotton Mill to his sons and the firm name was changed to Erwin M. Holt's Sons. In 1871 fire destroyed the mill, valued at $60,000 but insured for only $25,000. Despite the loss, a new factory was erected and production was resumed. Of the seven mills in Alamance County by 1870, five were cotton mills owned by the Holts; another was later purchased from John Newlin and Son, and operated by Holt, White & Williamson. The latter two partners were sons-in-law of Holt.

Rivaling the interest of Edwin Holt in the textile industry was the life and work on his plantation, Locust Grove. He built the manor house, not far from Alamance Creek, in 1849. In back of the house was the family cemetery where Edwin and Emily Holt and some other members of the family later were buried. Holt experimented with new farm methods, fertilizers, and crop rotation. By 1860, he owned 1,200 acres of improved land and 400 acres of unimproved land in Alamance County. At that time he also owned fifty-one slaves, though twenty-four of them were age ten or less and one was mentally retarded. The Holt plantation produced 1,900 bushels of wheat, 2,800 of corn, and 1,200 of oats, plus fruits, vegetables, dairy products, beef, and pork. The Holts salted down some 14,000–15,000 pounds of pork annually. In 1860 the gristmill produced 5,000 bushels of meal and 666 barrels of flour. In earlier years much corn was used to make whiskey, which was sold for as little as 37 1/2 cents per gallon. Holt was owner of at least one distillery, sawmill, brickyard, and shoe shop and part owner and director of a bank and a railroad.

Like his father, Edwin Holt was concerned with public affairs. A Whig, he went by wagon to Raleigh in April 1844 to hear Henry Clay speak and he attended a number of local Whig meetings. Though not a politician, he did speak out for the election of Thomas Ruffin in 1861. Holt frequently attended Orange County court and participated in activities directed by it. He was one of the commissioners for the building of a new court-house and he served on the finance committee. When Alamance County was established in 1849, he served on the building committee for the courthouse in Graham, the new county seat. He was also one of the commissioners chosen for the construction of a jail in Alamance County. Both Edwin Holt and his son Thomas served as stockholders and directors of the North Carolina Railroad built between Goldsboro and Charlotte. When surveying began in 1850, Edwin went out with surveying parties.

Holt was particularly interested in education, and he sent his children to schools held at St. Paul's Lutheran Church, Albright's school near their home, Miss Louisa Mason's school, Caldwell Institute, Mr. and Mrs. Burwell's Female Academy, The University of North Carolina, and a business school in Philadelphia. In 1844 he recorded attending a school district meeting. Schools were also held at the factory in Alamance, such as the geography school that began in April 1847. Further, Holt attended school examinations given in Graham Institute.

The most frequently mentioned single item in his diary was the church. A member of St. Paul's Lutheran Church located near his plantation, Holt also attended other churches in the area as well as preaching at services held in the factory. He and his family attended camp meetings such as the one held in October 1854 at Hawfields where three of his children professed religion. One of these was Thomas M. Holt, who united with the Graham Presbyterian Church in June 1856. Eventually Edwin, Emily, and seven of their ten children joined this church, where stained glass windows honored Edwin and Emily Holt and their son Alfred.

In many ways Holt represented the original industrial pioneer. His foresight, ability, and industriousness aided in planting the roots of the textile industry in the soil of his native North Carolina. At his death most of the mills in Alamance County belonged to members of his family. By his life and work Edwin ensured the growth of manufacturing through the work of his children and grandchildren.

With one exception, Holt's children were successful in business and were active in public affairs. When William died in 1917, his estate was valued at approximately $3 million, and his heirs paid the highest inheritance tax that had been paid in North Carolina to that time. Thomas was not only a businessman but he also served in both houses of the state legislature and as lieutenant governor and governor of North Carolina.