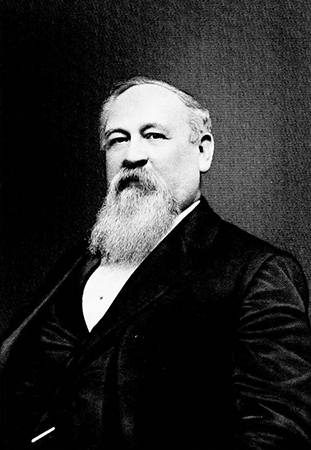 William Edwin Holt, textile manufacturer and civic and religious leader, was born at Locust Grove in Alamance County, near the site where the Regulators fought in 1771. He was one of ten children born to Edwin Michael Holt, a pioneer in the North Carolina textile industry as well as a prominent planter and landowner, and his wife Emily Farish, the daughter of a prosperous Chatham County farmer. Young Holt's education began at home under a tutor, and at thirteen he attended a school in Germantown. He later studied under the Reverend Dr. Alexander Wilson and in 1855 entered The University of North Carolina. After two years he left the university and returned to be general manager of his father's factory in Alamance County. Edwin Michael Holt had bought the interests of his partner, William A. Carrigan, and needed William's assistance.

When the Civil War began, Holt joined the Sixth North Carolina Regiment of the Confederate Army. However, Governor John W. Ellis ordered him to return to the factory to help supply cotton goods for the army. Holt remained there throughout the conflict. After the war, in 1866, when his father decided to retire from the textile industry, William Holt became one of the partners in the business. Later, with his brother James, he organized the Carolina Cotton Mills which began operation in 1869; meanwhile, William retained his interest in the Alamance factory. On 24 Apr. 1871, the mill at Alamance burned. With an estimated value of $60,000 the building was insured for only $25,000, but the factory was quickly rebuilt.

In 1880 William and James Holt built the Glencoe Mills. Later William moved to Lexington, where he erected the Wennonah Mills. His ever-expanding textile enterprises included the Anchor Mills, Huntersville; Florence Mills, Forest City; Asheville Mills, Asheville; Spray Mills, Spray; Mineola Mills, Gibsonville; and Francis Mills, Biscoe. Holt tried to treat his employees fairly and received considerable praise for raising their wages 25 percent in 1887 before other owners were willing to do so.

Holt's financial interests were widespread. Particularly concerned with banking in North Carolina, he was a stockholder and president of the Commercial National Bank in Charlotte. He also owned stock in the First National Bank and the Merchants and Farmers National Bank, both in Charlotte, and in the Bank of Lexington. Holt owned stock in the Southern Stock Mutual Fire Insurance Company and the Underwriters Fire Insurance Company of Greensboro, as well as in the North Carolina Railroad, of which he was a director. His real estate holdings included farms in Alamance and Davidson counties and numerous hotel properties in the state. These business affairs left him less time for politics than some other members of his family. He was a Democrat.

Holt's funeral was held in Grace Episcopal Church, Lexington, of which he was a member. He was buried in Lexington City Cemetery. Among his bequests, he left his church $4,000. The estimated value of his estate was over $3 million; the estate paid an inheritance tax of $126,000, which was the largest paid to that time in North Carolina. It was believed that, at the time of his death, Holt held more state bonds than any other person in North Carolina.

Julian Hughes, Development of the Textile Industry in North Carolina (1965).