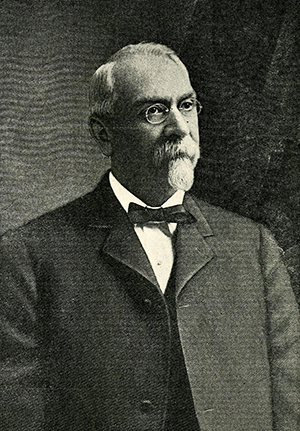 Lynn Banks Holt, textile manufacturer, was born near Graham in Alamance County, the son of Edwin Michael and Emily Farish Holt. He was a descendant of Michael Holt, who settled in present Alamance County about 1740. In 1837 his father founded the Alamance Cotton Mill near Graham, one of the oldest mills in the South and the first southern mill to make colored cotton goods.

L. Banks Holt was educated in local schools and at Hillsborough Military Academy. When the Civil War began, he left the academy to enlist as a private in the Orange Guards. For gallantry displayed in the capture of Fort Macon by his company, he was promoted to second lieutenant and assigned to Company I, Eighth North Carolina Regiment, Confederate Army. Later he became a first lieutenant. Holt participated in many important battles in northern Virginia and was wounded during one of the engagements before Petersburg. In the assault on Fort Harrison on 29 Sept. 1864, he was severely wounded and taken prisoner; he was confined first at Point Lookout and then at Fort Delaware until June 1865.

After the war, Holt joined his father at the Alamance Cotton Mill, which the elder Holt later turned over to his sons. L. Banks eventually purchased the interests of his brothers. In 1879 he and one brother, Lawrence S., built near Graham the Bellemont Mill, of which he became sole owner in 1887, and in 1883 founded at Burlington the E. M. Holt Plaid Mills, named for their father. Later he purchased his brother's interest in the plaid mills as well. Meanwhile, he also acquired the Oneida Mill at Graham and the Carolina Mills, both manufacturing colored cotton goods. In 1909 Holt consolidated the Alamance, Bellemont, Oneida, and Carolina mills and incorporated the business as the L. Banks Holt Manufacturing Company. He remained president of both the E. M. Holt Plaid Mills and the L. Banks Holt Manufacturing Company until his death. In addition to these properties, he owned a one-third interest in the Altamahaw Cotton Mills near Burlington and stock in many other mills. He was also a director of the Merchants and Farmers Bank and the Commercial National Bank, both of Charlotte, and of the North Carolina Railroad.

For many years Holt was an elder of the Presbyterian church in Graham. He was active in educational, charitable, and religious movements, to which he contributed generously. In politics he was a Democrat; although keenly interested in local matters, he declined to hold public office. His hobby was agriculture, and on his Alamance and Oak Grove farms near Graham he raised purebred livestock, including Jersey and Holstein cattle, Shetland ponies, and standardbred pacers.

Cyclopedia of Eminent and Representative Men of the Carolinas, vol. 2 (1892).