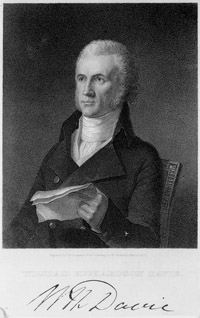 William Richardson Davie (1756-1820), who had a distinguished record in the Revolution, guided the creation of the University of North Carolina and is known as the “Father of the University.” Born on June 22, 1756, in County Cumberland, England, he was the son of Archibald Davie and the former Mary Richardson, recently resettled from Scotland. In 1764 Davie moved with his family to the Waxhaw region near Lancaster, South Carolina, where his maternal uncle was minister of the Old Waxhaw Presbyterian Meeting House. Davie’s wife was the former Sarah Jones of Halifax, daughter of the leading anti-Federalist Willie Jones. They were the parents of six children.

Graduating from the College of New Jersey (now Princeton University) in 1776, Davie returned home to fight for the Patriot cause. Seriously wounded in 1779, he retired for a time from military activity to read law under Judge Spruce Macay in Salisbury. Returning to battle with the approach of Cornwallis’ army, Davie served as commissary general under Nathanael Greene during the last stages of the Revolution. After the war, Davie moved to Halifax to practice law. In 1784-1785 he represented nearby Northampton County in the state House; from 1786 through 1798 he served as a representative for the town of Halifax. As a member of the House, he associated himself with progressive legislation and assumed a leadership position in the Federalist Party.

Elected by the General Assembly to the Constitutional Convention of 1787, Davie supported the Great Compromise regarding congressional representation, but left before the meeting was concluded and the Constitution signed. During the next two years he worked for its approval in North Carolina, and as a delegate to the state constitutional conventions of 1788 and 1789. Indeed, it was his motion during the latter meeting that resulted in ratification.

Only three weeks later, Davie introduced and secured passage in the General Assembly of a bill to establish the University of North Carolina. Thereafter, he further fostered the institution by marshalling financial support, launching initial construction, and recruiting faculty. On December 4, 1798, Davie was elected governor by the General Assembly on a wave of Federalist support. During his single term, Davie focused on the fixing of common boundaries with Georgia, South Carolina, and Tennessee, monitoring investigations into the Tennessee land frauds, and on increasing the state’s overall military preparedness. Indeed, he himself was appointed a brigadier general in the army being prepared nationally to repel an anticipated French invasion.

Davie left the governorship to accept President John Adams’s appointment as one of three peace envoys to France. During the following year the trio of prominent Federalists negotiated a final settlement, thus bringing to an end the undeclared war that had subsisted between the two countries since the XYZ affair. When Davie returned to North Carolina, the political landscape had changed. Thomas Jefferson was president, and the Republican Party was in the ascendant. In 1803, in the last of his many campaigns, he was unsuccessful in his bid for a seat in Congress.

Disillusioned and enervated, he withdrew to “Tivoli,” his Lancaster County, South Carolina, plantation. There he immersed himself in the life of a country squire, tending crops, raising horses, and enjoying the company of books and friends. He died on November 5, 1820, and was buried in the Waxhaw Presbyterian Church cemetery.