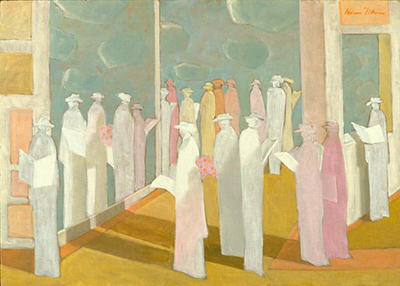 Hobson Lafayette Pittman, painter and teacher, was born in Edgecombe County, where his father, Biscoe Pittman, was a merchant in the small community of Epworth. His mother, Alice Walston, was a native of Scotland Neck; she was a devoutly religious woman who had a strong influence on her son. Both parents came from families long settled in eastern North Carolina.

When young Pittman was six, the family moved to nearby Tarboro. Here he began the study of art and attended the local schools. In early life, however, Pittman considered the theater as a career. His father died when he was eleven and his mother when he was sixteen. At age eighteen Pittman went to Pennsylvania to make his home with his older sister, Juanita, who had married a resident of the Philadelphia area. From 1921 to 1922 he attended Pennsylvania State College before teaching for a short while in a one-room school in Chester County, Pa. This experience contributed to his later success as an art teacher.

Pittman resumed his education with studies at the Carnegie Institute of Technology (1925–26). From 1920 to 1931 he spent his summers in the art colony at Woodstock, N.Y., where he studied chiefly with Albert Heckman. During his formative years Pittman said he was influenced by the works of Hopper and Birchfield. He admired the painting of the nineteenth-century Frenchman, Odelon Redon, and of Antonello de Messina, who is said to have brought oil painting from Flanders to Italy. In 1928 Pittman made the first of his many trips to Europe. In 1956 he spent a year of study abroad after receiving a Guggenheim Fellowship, and late in life he traveled in the Orient and South America.

Pittman first painted in the cubist and expressionist veins, but as he approached his mid-thirties he developed a very personal style. He himself said that he painted not real objects but from reminiscences or memory. The first drawing he ever made was of his mother's bureau, and a painting done a few years before his death, entitled Self Portrait, depicts a bureau, flowers strewn on its top surface, against a blue sky flecked with clouds.

Typical of Pittman's major style are his paintings of interiors, either empty or peopled with what he described as "languid ladies," night-gowned or dressed in turn-of-the-century clothes. These rooms have many doors and windows, revealing bits of landscape which, be it a moonlit garden, an empty street, or the dusk of a summer evening, help set the mood for the picture. Critics of Pittman's work use the words poetic, romantic, Victorian, stage setting, or southern, but there is something more—there are paintings in which he conveys the sensation of hot weather; in others, the psychological feeling of recent death or departure. The actual themes of many paintings are widowhood, loneliness, or disappointment but at the same time they are not without hope and convey a subtle, wry humor. The South as Pittman captured it is not the conventional one of moonlight and magnolias but the distinct imprint, frozen in time and space, of that part of rural eastern North Carolina where he spent his childhood, that landscape, open and yet curiously intimate, of flat fields and densely wooded horizons. His friend and colleague, Francis Speight, described the "interiors" as "touched with genius" and was of the opinion that for these the artist would be best remembered.

Pittman became equally celebrated for his flower paintings and he treated flowers, particularly roses and anemones, as few modern painters have. Not only living flowers but also dead flowers intrigued him, and, as one critic put it, he was able to convey the "tension of a blossom bending on its stalk" and "the mystery of stems entering water."

This artist also excelled in watercolor and pastel. William Hull, who organized the retrospective of Pittman's work at Pennsylvania State University, is of the opinion that his forte was watercolor and that he was one of the masters of this medium. Late in life Pittman said that he best expressed himself in pastel. He felt that color was the most important aspect of painting, and it is appropriate that he has been described as a master colorist. It is interesting to observe the development in his sense of color throughout his lifework. The early paintings are dark and somber, whereas with maturity color is lighter and more vibrant. The large paintings done in his last years are more abstract than his usual style, thinly painted with bold strokes, canvases shimmering with color and light.

In Philadelphia art circles, Pittman was considered an unusually gifted teacher. He himself maintained that the best instruction an artist could have was observation of nature and study in museums. His teaching career began in 1931, when he became director of art at the Friends Central Day School near Philadelphia. From 1932 to 1965 he taught in the summer school at Pennsylvania State College. In 1945 Pittman began teaching and lecturing at the Philadelphia Museum of Art and in 1949 he became a member of the faculty of the prestigious Pennsylvania Academy of Fine Arts, the oldest art school in the world. He had the rare talent of aiding a student's development without leaving his own imprint. His teaching advanced his career in many ways. At Penn State he met Margaret Sanger, who was a friend for years. At the Philadelphia Museum he was associated with John Canady, later art critic of the New York Times who developed an appreciation of his work. In his later years his Philadelphia Museum lectures on the history of art were extremely popular.

During his lifetime, Pittman was the recipient of many honors. His work was exhibited in group and one-man shows all over the United States. In 1934 he was represented in the Nineteenth Biannale Exhibition in Venice and in 1946 his work appeared in a show of American art at the Tate Gallery in London. The show "Romantic Painting in America," held at the Museum of Modern Art in New York in 1943, also included some of his work. In 1953 the National Academy of Design elected Pittman to membership, and in 1960 he became an honorary member of the International Institute of Arts and Letters. In 1943 he won the Scheidt Memorial Prize at the Pennsylvania Academy of Fine Arts, and in 1960 he was the first recipient of the Brevoort-Eickemeyer prize at Columbia University. He received the Penn State Medal in 1963. In the same year the North Carolina Museum of Art in Raleigh honored Pittman with the first retrospective exhibition of his work; it was the third in the museum's series of exhibits devoted to prominent North Carolina artists. In 1968 he received the North Carolina Award in Fine Arts. Shortly after his death the museum of Penn State University organized a retrospective, entitled "The World of Hobson Pittman," that was shown at University Park and later at the Pennsylvania Academy of Fine Arts in Philadelphia.

In the last decade of his life Pittman had good and frequent press coverage in Philadelphia newspapers. The late Jane Hall, art editor of the Raleigh News and Observer, was a sympathetic critic of his work. Some years earlier he had been featured in Life magazine with colored reproductions of some of his paintings (1945), and afterwards Life commissioned him to paint scenes of Charleston, S.C. (1946). Clare Booth Luce, wife of the publisher of Time-Life, became a close friend.

In 1949 Pittman bought a carriage house with four acres in Bryn Mawr, a Main Line suburb near Philadelphia. Over the years he converted the structure into a comfortable residence, studio, and art gallery. Here were displayed the treasures he collected on his travels, representing art objects from varying cultures worldwide. The galleries were hung with his own paintings and those of favorite and particularly gifted students. The house, called Silver Beech, took its name from the magnificent beech tree near the front door. The four acres surrounding it were divided into small gardens by hedges and embellished with occasional statues, urns, and other garden ornaments—this gave the effect of the artists own "interior" paintings.

As he grew older, Pittman came to consider Silver Beech as an integral part of himself and was apprehensive that the collection would be dispersed after his death. He therefore made arrangements that the house and contents be conveyed to nearby Bryn Mawr College to be maintained as a museum.

Pittman's thrift was proverbial among his friends and he left, in addition to the house and its contents, a respectable estate. In his will certain paintings were left to various museums, and trusts were set up to benefit relatives for life; the residual legatees were the North Carolina Museum of Art, the Philadelphia Museum of Art, and the Pennsylvania Academy of Fine Arts. 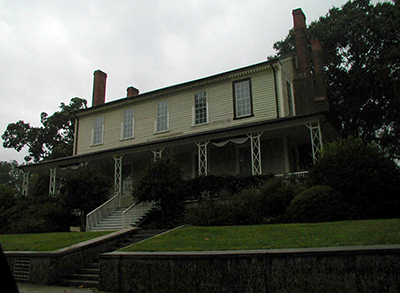 Pittman died in the Bryn Mawr Hospital after a long illness. He was buried in Greenwood Cemetery, Tarboro. A few months before his death, he had spoken of Joseph M. W. Turner, the master colorist and innovator whose contribution to the development of painting has only recently been recognized. He observed, "I do not know where I will stand in the history of art but I do know that I will be only a small dot compared to the genius of Turner, and to think he was an Englishman!" Pittman may have been too modest in his comparison, but it may be said that it is no more surprising that Turner was an Englishman than Edgecombe County in the early years of the twentieth century produced an artist of international note.

Pittman's paintings are in many major museums in this country, including the Metropolitan Museum of Art and the Whitney Museum of American Art in New York, the Phillips Collection in Washington, D.C., the North Carolina Museum of Art in Raleigh, and the Ackland Art Museum in Chapel Hill. He is represented in many private collections, chiefly in Pennsylvania and North Carolina. A large collection of works by Pittman, including three self-portraits, along with his furniture and personal effects, is housed in the Blount-Bridgers House in Tarboro. Here a "loving museum" has been established by Pittman's niece and heir, Alyce Weeks Gordon Patrick. The Hobson Pittman Memorial Gallery, also located in the museum, often displays work by Pittman and his students.

A portrait of Pittman by his former student, Hiram Williams, afterwards head of the Department of Art, University of Florida, was displayed at Silver Beech. It was exhibited at the North Carolina Museum of Art in the show "North Carolina Collects" in 1967.