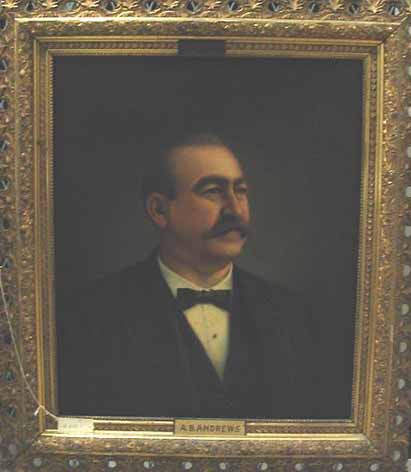 After his mother's death in 1852 and his father's the following year, Andrews passed under the guardianship of his uncle, Philemon B. Hawkins, a railroad developer. In 1859, at the age of seventeen, he left Henderson Male Academy to join Hawkins as a clerk on a contract construction project on the Blue Ridge Railway near Pendleton, S.C. Almost immediately, the young man demonstrated exceptional ability; within six months he was promoted to become general superintendent, purchasing agent, and paymaster, positions he held until the Civil War interrupted construction.

Andrews enlisted in Company E, Ninth North Carolina Regiment (afterward the First North Carolina Cavalry), and was elected second lieutenant on 16 May 1861. In September he was promoted to first lieutenant and transferred to Company B; in July 1862 he was promoted to captain and placed in command of the company. Shortly thereafter, on 9 July 1862, while patrolling the Roanoke River near Hamilton, he participated in one of the more bizarre skirmishes of the war. Encountering three lightly armed Federal gunboats sailing upriver to attack the railroad bridge at Weldon, his cavalry command attacked and repulsed the enemy with rifle fire, in a rare instance of combat between cavalry and naval units.

Andrews, with the rest of his regiment, was later attached to the Army of Northern Virginia and fought in most of the campaigns of 1862 and 1863. On 22 Sept. 1863 he was shot through the left lung in a skirmish at Jack's Shop; the wound left him convalescent for months and forced his retirement from the army in 1864.

After the war, almost penniless, Andrews borrowed one hundred dollars to lease and equip a ferry that he personally operated across the Roanoke River at Weldon, under contract with the Petersburg Railroad; ironically, he replaced the demolished railroad bridge he had once defended. Then, in July 1867, partly through family contacts, he became superintendent of the Raleigh and Gaston Railroad and, in the following year, of the Chatham Railroad. In this capacity, he again proved his competence, rapidly repairing war damage and completing fifty-six miles of new construction. On 1 Nov. 1875 he left the Raleigh and Gaston to join the rapidly growing Richmond and Danville Railroad as superintendent of its North Carolina Railroad line from Charlotte to Goldsboro, which it was leasing from the state on a thirty-year contract. His reputation was further enhanced in this position; from 1878 to 1880 he also served as superintendent of the Atlantic and North Carolina Railroad (another state-owned, privately leased line), and by the 1880s he was supervising all Richmond and Danville operations in the state.

This high reputation also earned Andrews considerable influence in state Democratic administrations. Under Governor Zebulon B. Vance, he served as a military aide with the rank of colonel; under Governor Thomas Jordan Jarvis, he was a close advisor on railroad affairs. It was in this role that Andrews entered "the great North Carolina Railroad War" over the fate of the Western North Carolina Railroad.

Chartered in 1855 by the General Assembly, the W.N.C.R.R. was intended to complete the antebellum vision of a "North Carolina system," a trunk line of railways connecting the western portions of the state with the eastern ports. Joining the North Carolina Railroad at Salisbury, the line was intended to run to Asheville, with branches extending to Paint Rock, Tenn., and through Murphy to Ducktown, Tenn. The Civil War, however, halted construction, and economic depression, combined with rough terrain, hindered postwar expansion. In 1872 the company went bankrupt; in June 1875 the state bought the road outright but was unable to progress rapidly. By 1880 the line still had not reached Asheville, and easterners (such as Walter Clark in his "Mud Cut" letters) attacked the project as a costly, unproductive boondoggle.

Then an Irish entrepreneur, William J. Best, approached Governor Jarvis in early 1880 with a proposal that he and three other New York financiers (James D. Fish, William R. Grace, and J. Nelson Tappan) purchase the W.N.C.R.R. In return, Best would legally bind himself to complete the extension to Asheville and would further agree (in an informal, nonbinding arrangement) to complete the Paint Rock and Ducktown branches.

Believing Best's offer the most satisfactory answer to the state's dilemma, Jarvis quickly called a special session of the General Assembly, which approved the sale on 20 Mar. 1880 under two conditions: the purchasers would have to reorganize the company and pay off its floating debt (about $30,000), and they would have to complete construction of the main and branch lines according to a fixed schedule concluding with the opening of the Ducktown line by 1 Jan. 1885. Only when these conditions were met could the deed to the railroad be transferred.

All seemed well until mid-May 1880, when Best's associates suddenly refused to pay the floating debt and withdrew from the transaction. Best was left stranded; the sale act required that he pay the loan and reorganize the company by 29 May 1880 or forfeit control of the road. At once Jarvis and Vance (now a U.S. senator), acting as state commissioners in the sale, authorized Andrews to go to New York and help Best arrange for new financial backing. Andrews did so; three directors of the Richmond and Danville extended Best a ninety-day loan of $50,000, in return for half the W.N.C.R.R.'s stock. On 29 May, the last possible day before forfeiture, Andrews returned to North Carolina, paid off the floating debt, and assumed control of the railroad as president, while maintaining his positions with the Richmond and Danville. Two months later, the badly overextended Best, unable to raise cash to repay the loan, signed over a controlling share of the stock to the Richmond and Danville, and on 31 July 1880 the W.N.C.R.R passed entirely under R. & D. control.

Vance and most eastern members of the legislature were furious. "The monopoly [the Richmond and Danville]," Vance wrote, "is seeking to enrich the people and cities of other states at the expense of sacrificing the only hope of obtaining the long cherished idea of a central trunk line." On 19 June 1880 the Raleigh Observer reprinted a story from the New York Times that reported the organization of a "vast railroad combination" including both the R. & D. and the W.N.C.R.R.; the paper speculated further that most of the North Carolina road's freight traffic would be diverted to Virginia, rather than North Carolina, ports. Andrews was personally blamed in many eastern newspapers as the agent of a conspiracy of out-of-state capitalists consciously subverting the best interests of the state; together with Best and Buford, the president of the Richmond and Danville, he was subjected to close, hostile questioning by the state senate Committee on Internal Improvements during public hearings in Raleigh, 16–19 Feb. 1881.

Undeterred by criticism, Andrews proceeded vigorously with plans to complete the Western North Carolina's construction. Facing exceptionally difficult terrain and chronic labor shortages, he completed the line to Asheville by October 1880 and to Paint Rock by January 1882. At the same time, through careful lobbying with Jarvis and state treasurer John Milton Worth, two of the state's three W.N.C.R.R. commissioners, he was able to obtain necessary extensions of building deadlines as well as extra contingents of convict laborers. Attempts by Vance (the third commissioner) and other eastern interests to declare the Richmond and Danville's lease forfeit and to reassign it to Best (who had meanwhile formed a new syndicate leasing the Atlantic and North Carolina Railroad) failed when Jarvis and Worth effectively vetoed the plan at a commissioners' meeting, 17 Nov. 1881. Finally, in 1884, Andrews liquidated the Richmond and Danville's debt to North Carolina with a single payment of $600,000, relieving the state of levying any public taxes in that year; and in January 1891 the W.N.C.R.R. at last reached Ducktown, an engineering achievement unparalleled in the state's history at that time.

Although completion of the Western North Carolina was Andrews's best-known achievement, he also constructed numerous shorter railroads in the state during this period, most notably the North Carolina Midland Railroad from Winston-Salem to Mooresville; the Yadkin Railroad; the High Point, Randleman, Asheboro, and Southern Railroad; the Statesville and Western Railroad from Statesville to Taylorsville; and the Northwestern North Carolina Railroad. At the same time, he continued to advance rapidly in the Richmond and Danville management, as assistant to the president (1883–86), third vice-president (1886–89), and second vice-president (1889–94). When the Richmond and Danville declared bankruptcy in 1892, Andrews became general agent of its receivers, a position he held until 1894; and when the R. & D.'s holdings were reorganized within the Southern Railway Company, he joined the new firm as director (1894–1915), second vice-president (1894–95), and first vice-president (1895–1915). Reportedly, he declined the presidency of the Southern at one point, because he would have had to move his residence from Raleigh to Washington, D.C.

In 1886, at the request of President Grover Cleveland, he made a tour of inspection of the Northern Pacific Railroad on behalf of the federal government. 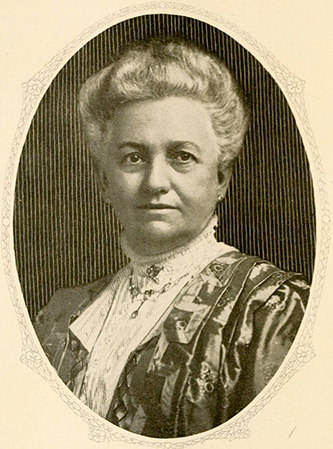 A Democrat and close friend of governors Jarvis and Elias Carr, Andrews nevertheless broke publicly with the party to vote for William McKinley in 1896. Although his sole experiences in public life were services as alderman in Henderson and Raleigh, he remained for over thirty years a significant and controversial figure in state politics by virtue of his position as a lobbyist for railroad interests. Josephus Daniels repeatedly charged that Andrews misused his powers to issue railroad passes and his position as a social arbiter and member of the Raleigh Capital Club to influence state legislators unduly. Walter Clark, in a letter to a political associate, wrote angrily: "Andrews is a corrupter of young men," in response to the latter's machinations regarding one controversial piece of rail legislation. Andrews, for his part, helped to underwrite the Raleigh Morning Post and the Raleigh Daily Tribune, a Fusionist newspaper, as competition for Daniels's News and Observer. Andrews's private railway car, when parked in Raleigh, was reputedly the scene of frequent gatherings of pro-railroad legislators and state officials. In July 1897 it was revealed that Andrews owned a half interest in Round Knob Hotel, a popular rail stop, with Major James W. Wilson, then chairman of the State Railroad Commission, and that the hotel was operated by S. Otho Wilson, also a member of the commission. These revelations led Governor Daniel Russell to dismiss both commissioners; Andrews himself had eight separate civil actions, each for five thousand dollars, brought against him for failure to testify about the affair before the State Corporation Commission.

In addition to his rail interests, Andrews was a director (1871–1915) and vice-president (1890–1915) of Citizens' National Bank and also a director of the Raleigh Savings Bank and Trust Company, the Jefferson Standard Life Insurance Company, the North Carolina Home Insurance Company, and the Sloss-Sheffield Steel and Iron Company of Birmingham, Ala. A trustee of The University of North Carolina (1885–1915) and founder and president (1891–1915) of the Home for Confederate Veterans in Raleigh, he also served as state commissioner and fifth vice-president for the Columbian Exposition of Chicago in 1893.

Andrews was Episcopalian and a member of the Church of the Good Shepherd in Raleigh. He died at his home at 407 North Blount Street and was buried with Masonic rites at Oakwood Cemetery in Raleigh.

Samuel A. Ashe, ed., Biographical History of North Carolina, vol. 1 (1905), and Cyclopedia of Eminent and Representative Men of the Carolinas of the Nineteenth Century, vol. 2 (1892).

Walter Clark, Histories of the Several Regiments and Battalions from North Carolina in the Great War, 1861–1865 (1901).

Andrews, Alexander Boyd. Prayers and other devotions for the use of the soldiers of the army of the Confederate States. Charleston, S.C. : Published for Female Bible, Prayer-book and Tract Society. 1860. https://archive.org/details/prayersotherdevo00andr (accessed January 24, 2013).