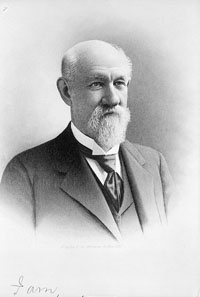 Thomas Jordan Jarvis (1836-1915) has the distinction of sharing his name with an ancestor, proprietary governor Thomas Jarvis, whose tenure extended from 1691 to 1694.  While serving as lieutenant governor in 1879, the nineteenth century Jarvis became governor when Zebulon B. Vance resigned to serve in the United States Senate; the following year he was elected to his own full term.  The son of Bannister Hardy and Elizabeth Daley Jarvis, he was born on January 18, 1836, at Jarvisburg in Currituck County.  The “Plough Boy of Currituck” graduated with honors from Randolph Macon College in 1860.  A captain in the Eighth Regiment, Jarvis received an arm wound at Drewry’s Bluff.  After the war, he moved to Columbia where he set up law practice.  Jarvis flirted with politics as a delegate to the 1865 convention and in 1868 won a seat in the legislature from Tyrrell County.  Reelected in 1870, he was the party’s choice for speaker of the house and used his power to reduce government costs, investigate railroad frauds, and oversee the impeachment trial of William Woods Holden.

In 1872 Jarvis moved to Greenville and two years later married Martha Woodson; the couple had no children.  Having worked his way into the hierarchy of the Democratic Party, Jarvis received the nomination for lieutenant governor on the successful ticket with Zebulon B. Vance in 1876.  Two years into the term, Vance resigned to serve in the Senate, thrusting Jarvis into the governorship on February 5, 1879.  Jarvis’s agricultural background instilled sympathy to the plight of farmers; the Industrial Revolution brought pressures for government intervention.  Against both groups Jarvis pitted his commitment to reduce the costs of government, eliminate corruption, and lower taxes.  His personal view was that state government’s only responsibility in economic development should be provision of an honest and efficient environment for all interests.  Consequently, as governor, he sold the state’s interest in several railroads to private enterprise, urged state agencies to make use of convict labor, and initiated scrutiny of the expenditures for county administration.

Jarvis persuaded the legislature to establish five normal schools for teachers; played a major role in the creation of the State Board of Health; pushed for funding for the Deaf and Dumb Asylum and for Oxford Orphanage; and proposed new mental health facilities in Goldsboro and Morganton.  Some projects incurred delays as the legislature responded to Jarvis’s inaugural appeal and reduced tax rates.  In his full term he pushed for increased aid to education and professional standards for teachers.  He secured permission from the assembly to build a new governor’s mansion.

President Grover Cleveland in 1885 appointed Jarvis United States minister to Brazil, an office he resigned in 1888 to return to law practice in Greenville.  The next year he turned down an offer to be first president of the North Carolina College of Agriculture and Mechanic Arts (present-day North Carolina State University).  Governor Elias Carr appointed him to fill the Senate seat vacated by the death of Zebulon Vance in 1894.  There he promoted a graduated income tax, tariff reduction, and involved himself with other monetary problems.  Jarvis hoped to gain a full term in the senate by challenging incumbent Matt Ransom rather than try for the two years remaining in Vance’s term.  He failed, but out of his effort came his interest in free coinage of silver.

By the early 1900s elder statesman Jarvis quietly withdrew from public life and concentrated on his legal practice.  In 1904 he declined the deanship of the newly created law school at Trinity College (present-day Duke University).  In 1907 he and William Ragsdale helped push through the legislature a law establishing a teachers’ training school in Greenville (present-day East Carolina University).  Thomas Jarvis, a Methodist, died on June 17, 1915, and was buried in Cherry Hill Cemetery in Greenville.