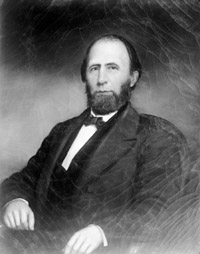 William Woods Holden (1818-1892), the illegitimate son of Thomas Holden and Priscilla Woods, was born on November 24, 1818, near Hillsborough. From age six, he lived with his father and stepmother, Sally Nichols Holden. With only a year or two of formal education, he learned to read and write. The remainder of his schooling came through his apprenticeship with Dennis Heartt, editor of the Hillsborough Recorder, to whom he was assigned at age ten. Following brief stints with newspapers in Milton, North Carolina and Danville, Virginia, he moved to Raleigh to work for the Star in 1836. Holden married twice. His first wife was Ann Augusta Young whom he wed in 1841. After her death, he married Louisa Virginia Harrison who shared his troubles and hardships. He fathered a total of eight children.

Holden studied law at night and received his license in 1841, but he preferred the newspaper business to legal practice. He arranged to purchase the North Carolina Standard, the Raleigh based organ for the Democratic Party, and in 1843, became sole owner and editor. Borrowing from his earlier Whig leanings, he promoted reform, equal suffrage in voting for state senators, internal improvements for all sections of the state, continued development in education, and better working conditions in the factories and mills. Holden, more than any other individual, revived the Democratic Party and led it to dominance during the decade of the 1850s.

In the sectional crisis, William W. Holden termed himself a “national” man, one who advocated the Union over secession while agreeing with southern interests in most other cases. As resistance reached futility in the Convention of 1861, he accepted and voted for secession. Having broken with the Democratic Party leadership, Holden used the Standard to promote a new Conservative Party, which in 1862 nominated Zebulon B. Vance for governor. With his influential newspaper spearheading the campaign, Holden led Vance to victory. The editor and the governor disagreed on how to conduct the war, however, and faced off as opponents in the 1864 election. Holden’s campaign rested on his belief that the Confederacy was doomed, and that North Carolina should seek a separate peace on the best terms possible. He had a sizable following, but most citizens agreed with Vance that continuing the war was preferable to the dishonor of deserting sister states. Holden suffered a humiliating defeat.

On May 20, 1865, President Andrew Johnson called Holden to Washington and appointed him provisional governor of North Carolina effective May 29. Challenged with a state in economic and social chaos, he made more than 3,000 appointments in an effort to reorganize state, county, and local governments. He set the schedule for amnesty oaths and supervised their administration, took some steps towards economic recovery, and was a principal figure in the revision of the state constitution to meet federal requirements. Holden urged the newly freed slaves to exercise their rights and make the most of their opportunites “aided as you will [be] by the superior intelligence of the white race.”

The 1865 convention called for a gubernatorial election on November 9. The Conservatives selected Jonathan Worth, whom Holden had appointed state treasurer, to oppose the provisional governor. Attacking Holden’s Civil War role and federal government relationship, Worth won the contest by almost 6,000 votes, but he could not assume duties until December 2¸ after North Carolina ratified the Thirteenth Amendment. Holden resumed editorship of the Standard and set about establishing the Republican Party in North Carolina. Meanwhile, Radical Republicans had seized control of Congress and put into effect their own plan of Reconstruction.

Radical Reconstruction of the South provided the perfect venue for William W. Holden to make another bid for governor. With freedmen now possessing the vote, he successfully attained his goal in 1868. In his inaugural address on July 4, Holden called for unity to rebuild the state and for the people to accept northern immigration and capital as parts of that effort. He spoke of challenges facing the state: reorganization of government at all levels, re-establishment of the schools, the need for a state penitentiary, development of the devastated economy, expansion of internal improvements, and equal justice for all persons. The last was emphasized by his warning that armed resistance to national authority would be treason, and that an organized and armed militia would be necessary to “execute the laws and suppress riots or insurrections.”

Social problems and political discontent brought into existence the Ku Klux Klan, a secret organization dedicated to the control and intimidation of blacks and Republicans. Holden vowed to destroy the Klan and made some ill-advised decisions capped by the “Kirk-Holden War” that ended his political career. The Conservatives recaptured the General Assembly in 1870 and brought charges of “high crimes and misdemeanors” against the governor for actions involved in his battle with the KKK. Notified that he had been impeached by the House of Representatives, Holden turned over duties of his office to Lieutenant Governor Tod R. Caldwell on December 20. The trial began on January 30, 1871, and lasted nearly three months. On March 22, the North Carolina Senate found Holden guilty on the most serious charges and ordered him removed from office, adding that he never again would be allowed to hold a state position. He was the first governor in the nation’s history to be impeached and removed from office, and the only one to bear that burden in North Carolina.

For a while Holden edited the Daily Chronicle in Washington, D.C., then accepted the job of postmaster in Raleigh. A paralytic stroke on April 2, 1882, forced his retirement from public service. No longer able to write, he dictated his memoirs; the day after completion in February 1889, a second stroke shattered his faculties. He died on March 1, 1892, and was buried in Oakwood Cemetery in Raleigh.

Senate Joint Resolution 256, 2011-12 Session. "A joint resolution to pardon William W. Holden from the judgement imposed on him by the Senate on March 22, 1871, on conviction of articles of impeachment." The bill's status may be found at: http://ncleg.net/gascripts/BillLookUp/BillLookUp.pl?Session=2011&BillID=S256.

May I use the photograph of

May I use the photograph of Governor Holden on my blog (non-commercial)? It is janetakesonhistory.org. Thank you.

Thank you for visiting NCpedia. Please contact the State Archives of North Carolina for permission. You can find their contact information here: https://archives.ncdcr.gov/contact.