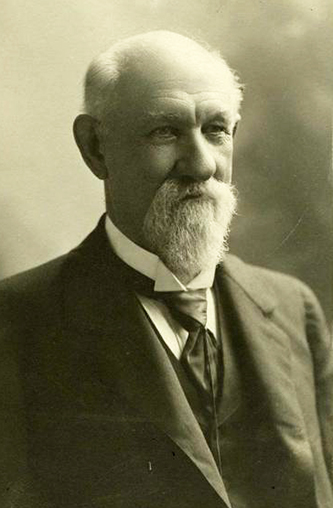 Thomas Jordan Jarvis, teacher, lawyer, lieutenant governor, governor, ambassador to Brazil, and U.S. senator, was born in Jarvisburg, Currituck County, the son of Elizabeth Daley and Bannister Hardy Jarvis, a Methodist minister and farmer. He was the brother of George, Ann, Margaret, and Elizabeth. Of English descent, the Jarvis family appears several times in the history of North Carolina. Thomas Jarvis (d. 1694) was deputy governor of the county of Albemarle under Governor Philip Ludwell, and General Samuel Jarvis led the Albemarle militia during the Revolutionary War.

The family of Thomas Jordan Jarvis had the necessities of life but few of the luxuries. Jarvis spent most of his youth working on his father's three-hundred-acre farm and sporadically attended nearby common schools. At age nineteen he decided to attend Randolph-Macon College, which at the time was located at Boydton, Va. Because his parents had little money, he paid his way through college by teaching in his hometown during the summer; he also was assisted by John Sanderson. He was graduated with honors in 1860 and received the master of arts degree in 1861.

In the spring of 1861 Jarvis opened a school in Pasquotank County. When North Carolina entered the Civil War, he enlisted in the Seventeenth North Carolina Regiment and on 16 May 1861 was commissioned first lieutenant of Company B, Eighth North Carolina Regiment. On 22 Apr. 1863 he was made captain. Although he had a good military record, he was wounded in the right arm during the Battle of Drewery's Bluff in May 1864 and never rejoined his regiment. His arm was permanently disabled. When the war ended, he was on sick leave in Norfolk. In May 1865, he was paroled and returned to Jarvisburg.

In order to comply with President Johnson's requirement for the restoration of the North Carolina government, Governor William W. Holden on 8 Aug. 1865 called an election for 21 September to select delegates to a constitutional convention. Elected a delegate from Currituck County, Jarvis opposed the writing of the new constitution which was later rejected by the electorate.

Late in 1865, he formed a business partnership with William H. Happer of Tyrrell County. The two men bought a stock of goods from Norfolk on credit and opened a small general store in the Gum Neck community. But business was poor and in 1867 Jarvis bought out Happer's share of the store. In his spare moments he began to read law. After obtaining a license in June 1867, he gave up his store and moved to Columbia.

In the spring of 1868, North Carolina adopted a new constitution and Jarvis won a seat in the state house of representatives in an uncontested Tyrrell County election. In the fall, the Democratic party nominated him as an elector on the Seymour-Blair ticket and Jarvis made the first of many statewide canvasses. North Carolina, however, voted for Ulysses S. Grant for president.

In the legislature, Jarvis opposed the passage of a bill for special tax bonds for railroad construction, changes in suffrage, and the organization of special militia to police certain counties. He later helped to establish the Bragg-Phillips Investigating Committee, which studied the corruption regarding the special tax bonds that had passed. In 1870, the Republican-Conservative effort was defeated in both houses and Jarvis was elected speaker of the house. He exercised a controlling role in the impeachment of Governor Holden, reduced the cost of state government, and investigated other railway frauds. In 1872 he was the Democratic elector-at-large on the Horace Greeley ticket.

About this time Jarvis moved to Greenville, where he formed a law partnership with David M. Carter and spent the next three years reestablishing himself. He also became chairman of the county Democratic central committee and helped the party win in county elections.

In 1875, the legislature again called for a convention to revise the state constitution. Jarvis won one of the county's two seats at the convention, where his presence was felt both on and off the floor. Although he was unable to repudiate the entire constitution, thirty significant amendments were made. One important change empowered the legislature to appoint justices of the peace and the county commissioners.

In 1876, Zebulon B. Vance was elected governor and Thomas J. Jarvis lieutenant governor, thereby ensuring Democratic control of the executive as well as the legislative branch of the state government. Jarvis had served two years when Vance won a seat in the U.S. Senate, leaving the governorship to Jarvis. Jarvis took office on 5 Feb. 1879.

As governor, he fought against governmental extravagance and corruption and worked for the reduction of taxes, the state debt, and government control. He sold various state-owned railroads, which were costly to the state, to private businesses. While attempting to reduce government spending, he was instrumental in the state's decision to provide mental health facilities at Morganton and Goldsboro. He also worked for the establishment of normal schools for teachers in North Carolina (in 1879 the state authorized additional normal schools at Davidson, Trinity, and Wake Forest colleges) and helped to organize the State Board of Health at the state and county levels.

Jarvis won reelection to a full term as governor in 1880. During this term, he actively supported establishing a system of county superintendents of education elected by boards of education, grades of teacher certification, standards of examinations for public school teachers, and lists of recommended textbooks. Funds for the mental institutions continued to increase, and the laws of North Carolina were for the first time codified and state insurance laws fully defined. The legislature also gave Jarvis permission to build a governor's mansion. State property in Raleigh was sold and convict labor and convict-made materials were used to build the mansion, which was begun in April 1883. Jarvis never lived in the new governor's residence.

Governor Jarvis won much acclaim for the state during the Boston Exposition of September 1883. North Carolina had the largest exhibit of resources, and Jarvis's "New South" speech focused even more attention on the state's progress in agriculture and industry. The exhibit was so popular that it was also shown in Chicago and New Orleans. At the end of his gubernatorial term, Jarvis was offered the post of U.S. minister to Brazil, although he had hoped for a place in President Cleveland's cabinet. Soon after starting his duties in July 1885, he became anxious to reenter North Carolina political life; in particular, he wanted the Democratic nomination for governor in 1888. However, Jarvis could not return to North Carolina until after the election, and Daniel G. Fowle became governor.

After President Cleveland died, Jarvis resigned his ambassadorial post and returned to Greenville. He reopened his law office in partnership with Alexander L. Blow; when Blow became clerk of the North Carolina Superior Court in 1912, Jarvis formed a partnership with Frank Wooten. In 1889, Jarvis handled one of his most sensational cases as a member of a team of lawyers who successfully defended Eugene Grissom, superintendent of the North Carolina Insane Asylum, against charges of immorality, corruption, mismanagement, and cruelty.

In 1889, the board of trustees offered him the first presidency of North Carolina State College but he declined. In 1892 he became the permanent chairman of the State Democratic Convention, and in April 1894, when Senator Zebulon B. Vance died in office, Governor Elias Carr appointed him to fill the vacancy. On Capitol Hill, Jarvis busied himself with fiscal matters and tariff reduction; he also advocated a graduated income tax. He did not seek election to the two remaining years of Vance's terms but tried unsuccessfully to win a full term in the other U.S. senatorial seat.

Jarvis then turned his energies towards unifying the Democratic party nationally under a silver standard platform. He attended the Chicago National Democratic Convention in 1896 as a delegate-at-large, with hopes of being elected national committeeman, a position captured by Josephus Daniels.

Because the Democratic party wanted new people to run for public office, Jarvis concentrated on his law practice. In 1901, he and four other lawyers won acquittals for State Supreme Court justices David M. Furches and Robert M. Douglas after impeachment charges had been brought against them by the state house of representatives. Jarvis also assisted in dismissing the charges for contempt of court brought against Josephus Daniels by Judge Thomas Richard Purnell because of several strong editorials published by Daniels about the judge's actions concerning the Atlantic and North Carolina Railroad. In 1904, President John C. Kilgo offered Jarvis the deanship of the new Trinity College law department but Jarvis declined because he felt that he was too old. 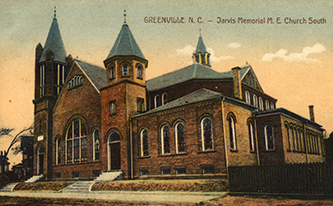 The Methodist church and public education were two of his strong interests. In 1891 he represented the North Carolina Methodist Conference in the Ecumenical Conference in Washington, D.C. He was also superintendent of the Sunday school and chairman of the Building Committee of the Methodist church in Greenville which was later named the Jarvis Memorial Methodist Church. In the field of education, Jarvis helped to establish a graded school system in Greenville and was chairman of the board of trustees for the system. He was a trustee of Trinity College and in 1907, with his friend, William Ragsdale, wrote the bill proposed before the legislature that would establish a teachers' training school in Greenville. Later Jarvis served as chairman of the Building Committee of East Carolina College. He was a member of the Odd Fellows and the Knights of Pythias.

In 1874 he married Mary Woodson, the daughter of Judge John Woodson of Goochland County, Va. They had no children. Jarvis was buried in the Cherry Hill Cemetery, Greenville. Jarvis Hall at East Carolina University and Jarvis Street in Greenville were also named in his honor. Portraits of him hang in the Pitt County Courthouse, Jarvis Hall, and the State Archives-Library Building in Raleigh.

Thomas Jordan Jarvis. "Schools vs. Saloons: Governor Jarvis on the Eternal Conflict That Is Raging between the School-Room and the Bar-Room - That Is the Reason for the Election in May." Raleigh, N.C.: Edwards & Broughton Printing Co., [1908?]. Documenting the American South, University of North Carolina at Chapel Hill. https://docsouth.unc.edu/nc/saloons/saloons.html (accessed April 5, 2013).