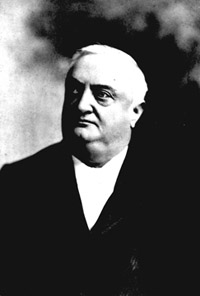 Daniel Lindsay Russell, Jr. (1845-1908) was elected to office by the uneasy “Fusion” alliance of Republicans and Populists in the bitter and racially charged election of 1896. The “Maverick Republican” was the son of Daniel Lindsay and Caroline Sanders Russell, born on August 7, 1845, at Winnabow plantation in Brunswick County. At age six, he went to live at Palo Alto, the Onslow County home of his grandfather. Educated first by private tutors, Russell at age twelve left to study at the Bingham School in Orange County. Three years later he entered the University of North Carolina; the war cut short his education. In 1862 he returned to Brunswick County to form an artillery unit. His military career ended when he barely escaped a court-martial for beating a fellow officer. Daniel L. Russell married a cousin, Sarah Amanda Sanders, in 1869; they had no children.

Russell was nineteen when he was elected in 1864 to the first of two terms in the state House. With the advent of Radical Reconstruction, Russell sided with the new Republican regime and won election as a Superior Court judge, remaining in that position for six years. While Russell maintained a law office in Wilmington, his residence was in Brunswick County from which he was returned to the legislature in 1876. Two years later he entered the Third District Congressional race and served a single term. He did not seek re-election in 1880 and returned to his law practice. Out of political office and doubtful of returning, Daniel Russell often spoke candidly. He castigated the Democrats for their unabated use of the racial issue, charging that Black citizens had been innocent victims of white barbarity.

By the early 1890s agrarian unrest and economic depression split the state’s Democratic Party. The schism widened, giving the Republicans a long awaited opportunity. An alliance with Populists resulted in victories in 1896 that removed control of the legislature from the Democrats and placed Republican Russell in the governor’s office. A number of advances were made during Russell’s administration: the Railroad Commission gave way to a Corporate Commission; a new law provided for popular election of the Commissioner of Agriculture; and a Department of Insurance was established. Some of the greatest gains came in education: an 1897 law restored the office of county superintendent; school districts were required to vote on local school taxes until approved; and a legislative appropriation of $50,000 aided school districts in complying with the tax law.

One of Russell’s greatest disappointments concerned his inability to recover the North Carolina Railroad from its lease to the Southern Railway. Bipartisan support for the lease and the influence of railroad tycoon J. P. Morgan forced Russell to abandon his efforts. Frustration followed disappointment in the last two years of his term as a reorganized Democratic Party resurrected the racial issue in 1898 and staged the “Red Shirt” campaign, capturing the legislature and many state offices through voter intimidation and violence against Black voters, Fusionists, Republicans, and their allies. The Democrats virtually negated any gubernatorial powers Russell was able to use. A prime example of Russell’s powerlessness is illustrated in his inability to call state troops to suppress the violence against Red Shirt enemies in Wilmington during the November 1898 Wilmington Coup. Further insult followed when Russell was forced to accept the “Grandfather Clause,” which effectively prohibiting Black people from voting.

Not only was Russell’s political career over in 1901 but the failure of his farms had drained his financial resources. He returned to Belville in Brunswick County to try to recoup his losses, resting his hopes on speculation in repudiated state bonds. The scheme was a failure and, at his death on May 14, 1908, his estate cleared. Russell is buried in a family plot at Belgrade in Onslow County.