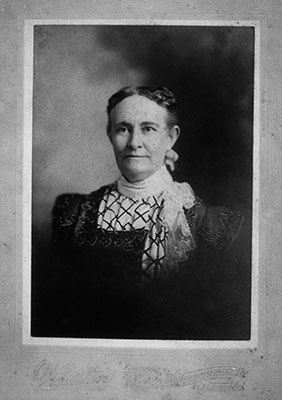 Republican governor Daniel Lindsay Russell took office in January 1897 with wife Amanda by his side. In an age and area in which support for the emancipation of slaves and an acceptance of African Americans as political equals were not popular, Daniel Russell alienated southern Democrats. With genuine concern for the betterment of society, he pushed for reforms, especially regulation of railroads, and that stance alienated the pro-business seg­ment of his own Republican Party. Moreover, in 1898 and again in 1900, North Carolina's Democrats mounted a white-supremacy campaign that often became violent. The governor was concerned about how the challenges he faced might affect his wife, who, he said, "was a quiet person well-known for her activities in the temperance cause." Amanda Russell, a strong woman who was just as concerned for her husband as he was for her, remained steadfast throughout his controversial term.

Even as Amanda Sanders, daughter of Onslow County's Colonel Isaac Newton Sanders and his wife, Caroline Burns Sanders, she was no stranger to controversy. When the Civil War began, her father refused to participate on either side because he opposed secession and the war. Because supporters of the Confederacy and the Union alike considered him a traitor, he spent much of his time in hiding. While Governor John W. Ellis had stripped Sanders of his militia rank as colonel, Governor Zebulon B. Vance, Eilis's successor, commis­sioned him captain of the Home Defense, thus enabling Sanders to come out of hiding.

Amanda Sanders, educated in Beaufort and later at St. Mary's in Raleigh, maintained a lifelong love of literature. When her father died in 1866 she and her younger sister Alice went to live with their uncle, John Sanders, at his Onslow County home, Elm Grove. There, on August 16, 1869, Miss Sanders married her cousin, Daniel Russell, whose family was quite wealthy. The newlyweds immediately faced the possibility of violence, in asmuch as the polit­ical climate of Reconstruction was unfavorable to Republicans. Russell had moved to Wilmington and been elected a judge of the superior court.  He faced so many threats  of physical violence that he was obliged to purchase a house closer to the courthoue. His wid­owed grandmother Alice Mitchell Sanders, who had reared him, lived with the young couple until she died in 1881. Following a later term in Congress and a temporary move to Washington, D.C., the Russells moved back to Wilmington, where Daniel practiced law. Later they lived at Belleville, their plantation in Brunswick County. The plantation produced rice and turpentine. During that time Amanda Russell started a dairy that came to be one of her lifelong interests. The kind and gracious woman began to share her good fortune with others in her community, often giving milk to people who had none.

A strong interest in the care of family members was another facet of the Russells' life together. Throughout their lives, numerous family members came to live with them. Although they had no children of their own, they enjoyed the company of many nieces and nephews, grandnieces and grandnephews, who lived with them. Indeed, even after the Russells moved into the Executive Mansion, one niece lived with them for the entire four years, and two others were there much of the time. A grandnephew named Daniel Rusell Sawyer was born there on December 31, 1897.

Remembrances by Amanda Russell's grandniece indicate how independent and strong this first lady was, as well as how influential she was on her younger relatives. According to her grandniece Alice Sawyer Cooper, "Mrs. Russell was herself a strong- minded, intelligent woman with a lively sense of humor, a quiet but deep religious belief ... "  (Jeffrey J. Crow and Robert F. Durden, Maverick Republican in the Old North State: A Political Biography of Daniel L. Russell, 12).

Amanda Russell died March 18, 1913, following an illness of several months. Her obituary stated that she "was remarkably gifted in personal attraction and mental qualities. While the first lady of the State at the Executive Mansion, Mrs. Russell took a firm stand for temper­ance. Her courage and independence did much to make the movement a popular one a few years later" (Raleigh News and Ohserver, March 19, 1913). Amanda Russell likewise held strong opinions concerning the Executive Mansion, especially the kitchen, which was then downstairs and had no window. When the legislature appropriated funds, she had the kitchen moved upstairs, where conditions were much brighter. Amanda Russell was buried in the Aman Cemetery in Onslow County.