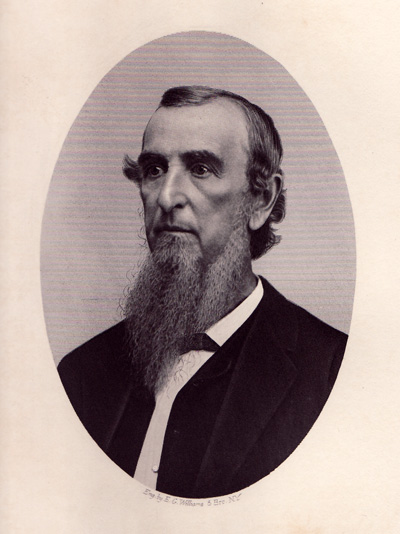 John Milton Worth, physician, businessman, and politician, was born near Center (Friends) Meetinghouse, Guilford County, the son of David and Eunice Gardner Worth. He was a descendant of John Howland and Elizabeth Tilley, prominent citizens of Plymouth Colony and pilgrims from the Mayflower, and of Tristam Coffin, who as a member of a small colony bought land from the Indians and became one of the first settlers of Nantucket Island off the coast of Massachusetts. Daniel Worth, the founder of the family in North Carolina, was born in Nantucket, Mass., and moved to North Carolina in 1739; settling at Center Meetinghouse, he became a substantial farmer. Daniel's son David, the father of John Milton Worth, studied medicine in Philadelphia and practiced in Guilford County. Like John Milton himself, four of his brothers—Jonathan, Thomas Clarkson, Joseph Addison, and Barzillai Gardner—became prominent businessmen in the state, and Jonathan also served as state treasurer (1862–65) and governor (1865–68). A first cousin was the Reverend Daniel Worth, the Methodist minister and Abolitionist who was jailed in Guilford County in the winter of 1859–60 and was twice convicted of circulating incendiary literature. John Milton Worth received his early education in schools in the Guilford County area and studied medicine in Transylvania University (now College), in Lexington, Ky. After practicing briefly in Guilford he largely abandoned medicine for goldmining, farming, and merchandising in Montgomery County. While representing Montgomery and Moore counties in the state senate in 1842, 1844, and 1848, he strongly supported internal improvements and the common schools. Worth later moved to Randolph County, where his brother Jonathan already lived. Like Jonathan, he was a Whig. Until the outbreak of the Civil War he was strongly pro-Union but thereafter supported the Confederate cause.

During the early years of the war Worth served as salt commissioner for the state. He was also colonel of the Sixty-third Militia Regiment but resigned his commission on 20 Dec. 1861 in order to give his full attention to his duties as salt commissioner. In 1864, however, he became colonel of the Seventy-sixth North Carolina Regiment, then known as the Sixth, or Senior, Reserve. His principal task seems to have been that of apprehending army deserters and draft evaders.

In 1870 Worth was elected to represent Randolph and Moore counties in the state senate, where he voted to impeach Governor W. W. Holden. He was reelected in 1872. From 1876 to 1885 he served as state treasurer, leading in the settlement of the state's debts and in the revision of its tax laws. Meanwhile he continued to manage his private business interests, to which he gave his full energies after retiring from the state treasurership. He was president of the Bank of Randolph and of the Southern Stock Mutual Fire Insurance Company and served as head of the Worth Manufacturing Company, which had large cotton mills at Worthville and Central Falls in Randolph County. Like many of his family for several generations before him, Worth was a member of the Society of Friends.

In 1832 he married Sarah Dicks. Their son, Captain Shubal Gardner of the Nineteenth North Carolina Cavalry, was killed in battle near Richmond on 31 May 1864. Their grandson, Henry M., became a lumberman and cotton manufacturer. John Milton Worth died in Asheboro and was buried in the Asheboro city cemetery.

Richard L. Zuber, Jonathan Worth: A Biography of a Southern Unionist (1963).