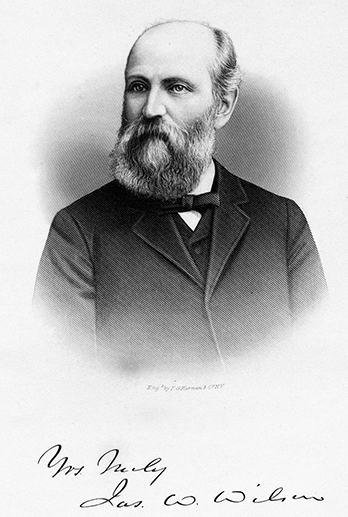 James William Wilson, engineer, was born in Granville County, the son of the Reverend Alexander, a noted Presbyterian clergyman and educator, and Mary Willis Wilson. He grew up in Alamance County, attended the Caldwell Institute in Greensboro, and was graduated from The University of North Carolina in 1852. Choosing the profession of civil engineer, he became a rodman on the survey of the Western North Carolina Railroad and was soon promoted to assistant engineer. Wilson settled in Morganton in 1856 and in 1861 married Louise Erwin, of McDowell County, who bore him ten children.

When the Civil War began, Wilson returned to Alamance County and raised Company F, Sixth North Carolina Troops. He became captain of the company and was later promoted to major and assistant quartermaster on the staff of General Stephen D. Ramseur. Wilson took part in most of the campaigns of the Army of Northern Virginia from the Seven Days' Battle in 1862 to Cedar Creek in 1864. In late 1864 Governor Zebulon B. Vance appointed him superintendent of the Western North Carolina Railroad. He was removed from the post during Reconstruction but continued to do work on the road under contract.

After the war Wilson became active in the Democratic party and with Alphonso C. Avery and Samuel McD. Tate formed a triumvirate that dominated the politics of Burke County and had a strong influence in the affairs of the Western North Carolina Railroad. In 1876 he was elected to the state house of representatives, where he championed the bill that reorganized the road, in which he owned 1,400 shares of stock, making him one of the largest private stockholders. In the spring of 1877 the new board of directors elected Wilson president of the railroad, and in this post he achieved his major claim to fame. Assuming the positions of chief engineer and general superintendent at a reduced salary, he worked to restore the finances of the near-bankrupt company to a sound condition and pushed forward the work on the line, which had virtually come to a halt during Reconstruction.

The building of the railroad through the mountains of western North Carolina, in the face of forbidding terrain, frequent landslides, and severe weather, as well as shortages of money, labor, and supplies, and sniping from political enemies, constituted an engineering feat that can only be described as heroic. In 1880 the state sold the Western North Carolina Railroad to a New York syndicate, which soon lost control to the Richmond and Danville Railroad. Wilson remained chief engineer until 1887, when he resigned to become chief engineer of the Knoxville, Cumberland Gap, and Louisville Railroad in Tennessee.

When North Carolina established a railroad commission in 1891, Wilson became its chairman. He was generally considered to be the member most sympathetic to the railroads. In 1897 Governor Daniel L. Russell retaliated against the commission's refusal to reduce railroad rates by attempting to remove James W. Wilson and S. Otho Wilson (no relation) from their offices. Russell charged that James Wilson and Vice-President Alexander B. Andrews of the Southern Railroad owned the Round Knob Hotel, which was worthless except as an eating house for the Southern Railroad, and that they had persuaded S. Otho Wilson to lease the hotel in his mother's name with the understanding that the railroad would abandon its other eating houses and give its exclusive patronage to the hotel. Russell, a Republican, suspended the two Wilsons for conflict of interest, but the Democratic-controlled legislature, which met in 1899, reinstated them. S. Otho Wilson resigned immediately following his vindication, and James Wilson's term expired soon afterwards.

Wilson was a member of the Democratic state executive committee for several years. He served on the board of directors of the Western Insane Asylum at Morganton from 1882 to 1891, becoming president in 1888, and was a member of the board of trustees of The University of North Carolina from 1891 to 1899 and 1901 to 1905. He lived in Charlotte during the last four years of his life and was buried in Morganton.