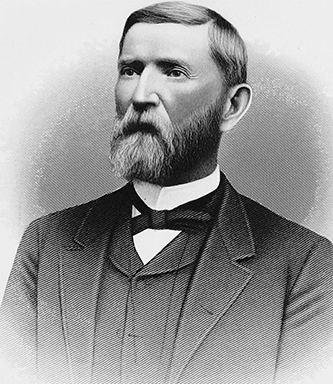 Samuel McDowell Tate, merchant, soldier, railroad official, and legislator, was born in Morganton. Of French-Huguenot and Scots-Irish heritage, he was the eldest son of David, who for many years represented Burke County in both houses of the North Carolina General Assembly, and Susan Maria Tate. After his father's death in 1836, Samuel attended private schools in North Carolina and Pennsylvania, his mother's native state. Completing his schooling, he established himself in Philadelphia as a merchant. In 1850 he went back to Burke County and set up a thriving business selling general merchandise.

Soon after his return to the state, Tate became involved with the Western North Carolina Railroad. Colonel Charles Fisher of Salisbury contracted in 1854 to build the first section of the road from Salisbury to Morganton, and Tate worked for him as an agent and as manager of the railroad's various financial interests. During this time Tate also served as a federal census taker for Burke County, and from 1856 to 1860 he was the postmaster of Morganton. In addition, he was a justice of the peace for twenty-five years.

In 1861, after the outbreak of war, Tate volunteered for service in the Confederate army and was appointed captain of Company D, Sixth North Carolina Regiment. Commissioned and promoted to the rank of major on 20 May 1862, he was advanced to lieutenant colonel on 2 July 1863 at Gettysburg. There he assumed command of the Sixth North Carolina Regiment after the death of Colonel Isaac E. Avery and led his troops up Cemetery Hill and in the battle on Seminary Ridge. Tate continued to command the Sixth regiment until the close of the war.

When the Civil War ended, Tate made his way back to Morganton, where the stockholders of the Western North Carolina Railroad elected him to the presidency of the disorganized and bankrupt organization. As president, Tate repaired and rebuilt the railroad, revamped the old rolling stock, and straightened out its financial affairs. Governor William W. Holden removed him from the presidency in 1865, but Governor Jonathan Worth restored him to that position in 1866. He was again ousted by the Holden-appointed board of directors in 1868 but continued to act as the financial agent of the stockholders and as the trustee for payment of debts.

His public service was not confined to the legislature. In 1886 Comptroller of the Currency William Lee Trenholm appointed Tate examiner of national banks in the district extending from West Virginia to Florida. In 1891 he worked hard to bring the North Carolina School for the Deaf to Morganton. The next year Governor Thomas Holt named him state treasurer of North Carolina following the death of Donald W. Bain; he served until December 1894, when he sought election to the post but was defeated.

Tate was tainted by scandal during his campaign for state treasurer. The Progressive Farmer Advance Sheet claimed to have evidence that he had been in partnership with Littlefield, Swepson and Company to bring pressure to bear upon the legislature in order to secure the sale of bonds for railroads. Tate was berated in the press, he was investigated twice by a legislative commission, his bank books were examined, and he lost the election, but he was not found guilty of any wrongdoing. After his defeat, he retired from public life.

A Presbyterian and staunch Democrat, Tate gained a reputation as a person of solid judgment. The Legislative Biographical Sketchbook of 1883 describes him as a "quiet, old-fashioned Jeffersonian Democrat; sound, logical, practical, and worthy to be carefully considered."

In 1866 he married Jennie Pearson, the daughter of Robert Pearson, a bank president and merchant in Morganton and the first president of the Western North Carolina Railroad. The Tates had ten children: Franklin Pierce, Sue Virginia, Wilhelmina, Samuel McDowell, Jr., Alexander, Claude, Maude, Irene, Howard Wilson, and Charles Gordon. Tate died in Morganton; he and his wife were buried in Forest Hill Cemetery.

Walter Clark, ed., Histories of the Several Regiments and Battalions from North Carolina in the Great War, vols. 1, 3–5 (1901 [portrait]).