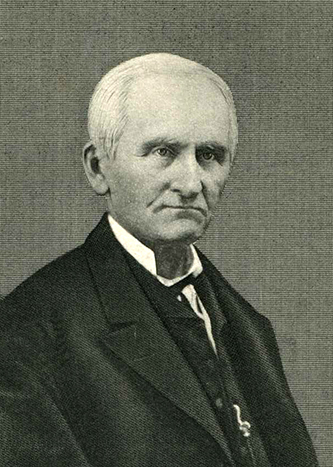 Jonathan Worth, Civil War treasurer, Reconstruction governor, legislator, lawyer, planter, and businessman, was descended from a line of Quaker ancestors extending back to colonial Nantucket. The third child and second son of David and Eunice Gardner Worth, he was born at Center, on the northern edge of Randolph County. After attending neighborhood schools and the Greensboro Academy, he moved to Hillsborough in 1823 to study law under the eminent judge Archibald DeBow Murphey. Murphey became Worth's friend and mentor and exercised perhaps the greatest influence on him. The bond between the two men was strengthened when Worth married Murphey's niece, Martitia Daniel, in 1824. On completion of his studies with Murphey, Worth and his bride settled in Asheboro, where he opened a law practice and lived until he moved to Raleigh in 1860.

Worth's political activity began as early as 1830 and continued throughout his life, but in the years prior to 1860 it was intermittent. He served in the House of Commons in 1830 and 1831 at the height of the Nullification crisis, at which time he set the tone of his political career by introducing resolutions denouncing the states' rights doctrine. In the 1830s, while not in public office, he developed a keen admiration for Henry Clay and the emerging program of the Whig party.

While serving in the state senate in 1840, Worth wrote the law that established the basic structure of the state's antebellum public school system. He then served as superintendent of schools in Randolph County for twenty years under the system he had written into the 1841 law. During the early 1840s he twice ran for Congress but was defeated on both occasions. In 1858 he returned again to the state senate, spending most of his time in an unseemly squabble over the operation of the North Carolina Railroad.

Worth's nonpolitical activities in the years between 1825 and 1860 were extensive and varied. His primary work was practicing law, but he was deeply involved in business, including the development of textile mills and the operation of several general stores. Also heavily involved in the movement for internal improvements, he served from 1856 to 1860 as general superintendent of the Fayetteville and Western Plank Road Company. Before the Civil War Worth owned and operated several farms. He found it necessary to use slaves but felt increasingly uneasy about the institution of slavery.

As a state senator during the secession crisis, Worth opposed the call of a convention to consider withdrawal from the Union and was one of only three men in the legislature who rejected the convention bill in its final form. After making a painful decision to support his state, Worth accepted the position of public treasurer in the administration of Governor Zebulon B. Vance. He administered the wartime financial legislation in an able, but conservative manner, frequently disagreeing with Confederate treasury officials over financial relations between the two governments. Detesting the war from beginning to end, he became deeply involved in a peace movement led by William W. Holden in 1863 and, especially, 1864. His final months as treasurer were spent in an effort to recover lost, displaced, and stolen property belonging to the state.

Under President Andrew Johnson's plan of Reconstruction, Worth was elected governor in the fall of 1865 and reelected in a regular ballot in 1866. Almost all of the work of his office was concerned with problems created by the war or with reestablishing North Carolina's former position in the Union. Civil government was restored rapidly, but Worth consistently opposed the presence of Federal troops in the state, particularly those connected with the Freedmen's Bureau. He deeply resented the role of the bureau's courts and argued at length with bureau officials over the administration of justice. He was almost equally concerned about continuing conflicts between former Secessionists and Unionists.

From 1866 until his removal in 1868 Worth fought against the programs of Reconstruction emerging from Washington, D.C. He loathed the Fourteenth Amendment and the Reconstruction Acts, passed early in 1867, which provided for military rule, a new state constitution, Negro suffrage, and elections to replace the existing government. In June 1868, after these arrangements were carried out, Worth was removed from office.

With his withdrawal from public life, Worth's health declined rapidly. Following a futile sojourn at a spa in the Virginia mountains in the summer of 1869, he died and was buried in Oakwood Cemetery, Raleigh.