The Progressive Farmer is among the oldest and most widely read of the nation's agricultural periodicals. The history of the publication reflects dramatic changes in southern rural life and journalism. The paper was founded in Winston (now Winston-Salem) in February 1886 by Leonidas L. Polk, a former Confederate officer and North Carolina commissioner of agriculture. Initially, it appeared in a weekly newspaper format. The Progressive Farmer promoted more efficient agricultural practices and improved farm life. Polk also used the paper to stimulate organization among farmers, in particular the Farmers' Alliance and Industrial Union, or Southern Farmers' Alliance, for which the paper served as the official state organ. 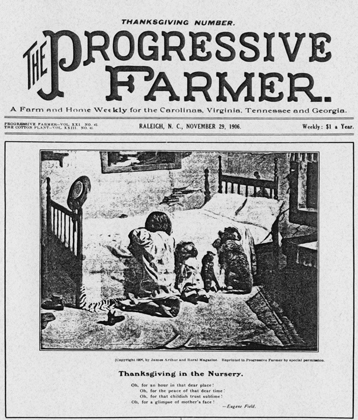 After Polk moved his publishing enterprise to West Hargett Street in Raleigh in 1887, the Progressive Farmer was increasingly involved in political controversy. In the late 1880s and early 1890s the paper championed a wide range of reform causes, including the establishment of an agricultural college in Raleigh, railroad rate regulation, and the Subtreasury Plan. Although its editorials first maintained that these reforms could be achieved through legislation supported by the Democratic Party, just before Polk's sudden death in June 1892 the Progressive Farmer announced its endorsement of the newly formed People's, or Populist, Party. At that time, the circulation of the paper exceeded 20,000, making it one of the leading Farmers' Alliance-Populist papers in the nation.

After Polk's death, editorial control of the Progressive Farmer passed to James L. Ramsey. Ownership of the company remained in the hands of Polk's daughter, Juanita Polk Denmark, whose husband, James W. Denmark, was business manager. Ramsey's tenure, which lasted until 1899, was shaped by the turbulence of Populism, Fusion, and Democratic white supremacy politics. During the 1890s the paper continued to portray itself as the friend of farmers. It endorsed all of the Populist platforms and supported Populist-Republican candidates. In 1896, the newspaper supported the Democratic-Populist nominee for president, William Jennings Bryan.

The demise of Populism required a new political and journalistic strategy. This different direction was conceived and executed by Clarence Poe, a native of Chatham County. Although only 18 years old, Poe became editor-in-chief of the Progressive Farmer in July 1899. Poe had written for the newspaper since 1897, and he was deeply interested in rural problems. Poe had been approved for the editorship by the Denmarks and by Ramsey. Yet Poe was not committed to third-party politics. He immediately made peace with North Carolina Democrats, disengaged the Progressive Farmer from Populism, and supported the Democrats' disfranchisement legislation of 1900.

In 1903, with the help of borrowed money, Poe completed the transition by purchasing Polk's Progressive Farmer Company for slightly more than $7,000. He then formed a new company with the same name, buying almost 47 percent of the stock. The other owners of the new Progressive Farmer were B. W. Kilgore, later dean of agriculture at North Carolina State College (modern-day North Carolina State University); Charles W. Burkett, then head of the Agriculture Department at the School; T. B. Parker, a prominent member of the North Carolina Farmers' Alliance; and the Baptist editor Josiah W. Bailey of Raleigh. Impressed by the failures of Populism, Poe declared that the new Progressive Farmer would be free from "all partisan politics and political scheming" but would remain dedicated to "everything that makes for the uplift or betterment of farm life." This strategy, as well as high-quality writing and production, proved an immediate success. Subscriptions grew from 6,000 in 1903 to more than 35,000 by 1908.

Poe served as president of the Progressive Farmer until 1956. Under his leadership the publication experienced continued transformations. Growth in readership was exponential, reaching well over 1 million by the mid-1950s. But because of its aggressive search for new subscribers, the publication's primary connection with North Carolina was destroyed. An increasingly regional focus and mergers with rural papers from outside North Carolina resulted in a decision to move the headquarters and printing plant from Raleigh to Birmingham, Ala., in 1911. Raleigh became a regional office, and additional offices were later added in Memphis and Dallas. The regional system permitted local editions with attention to different agricultural conditions. In 1932 the weekly newspaper format was dropped in favor of a monthly magazine with color illustrations.

In the early 2000s, the Progressive Farmer reached more than 1.5 million readers 20 times a year. The Progressive Farmer Company ran several other operations from its Birmingham, Ala., headquarters, including the monthly magazine Southern Living and a popular website on the Internet.

Issues of the Progressive Farmer from 1886 to 1904 can be viewed online at the Library of Congress Chronicling America: http://chroniclingamerica.loc.gov/lccn/sn92073049/issues/

Emory Cunningham, Eighty-Nine Years of Service in the South: The Story of the Progressive Farmer Company (1975).

In the 1950's I remember a cartoon called Peter Painter. My mother read it to my sister and I. I am now 70 years old. Was this published in the Progressive Farmer?

If not, do you know how I can find out what little sized newspaper might have printed it? We got it in Texas living on a farm.

Donette Bartley
Thanks so much.

Thank you for visiting NCpedia and taking the time to share your question.

Unfortunately, NCpedia does not have anything that would help with this question. The Library of Congress does have digitized issues from 1886-1904 available online -- http://chroniclingamerica.loc.gov/lccn/sn92073049/issues/ -- but this is well before the 1950s.

I have done a bit of looking around and do not see anything about a cartoon called Peter Painter.  However, I see that there was a book series called Peter Painter, written at least into the 1940s. Here is a link to the item in WorldCat -- http://www.worldcat.org/oclc/642746. WorldCat searches holdings of libraries around the world and you can see details of a particular work and libraries near you that may have it.

I hope this helps! Please post back if you have additional questions.

My grandfather passed down a

My grandfather passed down a green binder with several issues of the Progressive Farmer and Southern Farm Gazette from 1916. Is there any value in these, other than my great pleasure in looking at them? They are becoming quite fragile and I would like to preserve them. I was considering laminating the pages. Do you have any suggestions? Thank you

Thanks for visiting NCpedia and taking time to share your artifacts and question.  And that's a great question!

Here is some information from the NC Museum of History on how to handle and take care of print and paper-based artifacts -- http://ncmuseumofhistory.org/-How-to-Care-for-Your-Docs-Books-and-Images.

My grandfather was a farmer

My grandfather was a farmer for most of his life and always had a subscription to Progressive Farmer magazine. I remember that there was nearly always a house plan toward the back with a picture of the house and the floor plan. I'm pretty sure they were all by the same designer/architect. I've been wracking my brain trying to remember his name but it's been decades since I use to look in the back for the house. I loved looking at houses and floor plans. Could you please tell me who the contributor was for those back in the 1960's? Thank you so much for any assistance you might provide. :)

Thank you for taking the time to post an inquiry about Progressive Farmer to NCpedia. I've forwarded your inquiry to Reference Services at the NC Government & Heritage Library. Their direct email address is slnc.reference@ncdcr.gov, and website is http://statelibrary.ncdcr.gov/contact.html. Someone in Reference Services will be in touch with you soon about your question. Good luck in your research!