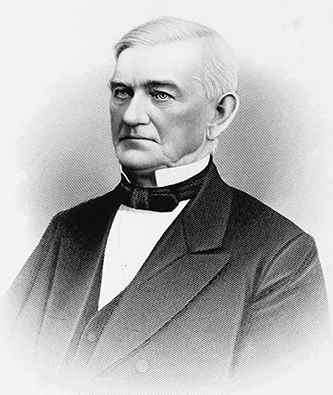 William Johnston, attorney, was best known as a railroad builder and businessman of great frugality and sagacity; but, like many other public-spirited men of his day, he also was active intermittently in politics. Born on a farm in the lower Catawba valley near Cowans Ford in Lincoln (now Gaston) County, he was the son of Robert and Mary Reid Johnston whose union produced seven sons and five daughters. Both sides of the family were of Scottish descent; Johnston's paternal and maternal grandfathers, Colonel James Johnston and Captain John Reid, both had fought King George III and had served in the North Carolina Senate. Hard work and frugality were family characteristics. In later life William Johnston remembered fondly that when John Reid agreed to his parents' marriage he admonished Robert Johnston, the young suitor: "You make the money and Mary will take care of it." Apparently both parties to this union fulfilled their "duty" and inculcated the same spirit in their offspring.

After a bucolic boyhood Johnston received his first formal education from Robert G. Allison, who headed a nearby academy. Subsequently he attended The University of North Carolina, graduating in 1840, and was a member of the first law class conducted by Richmond M. Pearson at Richmond Hill—a school destined for fame. Admitted to the bar in 1842, he established a highly successful practice in Charlotte.

Although a competent and respected lawyer, Johnston was soon involved in building transportation systems. In the 1840s he headed the Charlotte and Taylorsville Plank Road Corporation. Under his direction some twenty-five miles of the road were built; but plank roads were beginning to be supplanted by railroads as a principal means of travel and transportation. In 1856 he abandoned his legal practice to become president of the Charlotte and South Carolina Railroad Company. He quickly demonstrated good management and fiscal acumen. The company's stock rose from $0.45 to par, thereby adding about $500,000 to the worth of the corporation. In 1859 Johnston also became president of the Atlantic, Tennessee, and Ohio Railroad Company, which was the culmination of an old idea to build a railroad from the Atlantic Ocean to the Ohio River. Construction of this privately financed venture began in January 1861, and by March 1863 the link from Charlotte to Statesville had been completed. Meanwhile, however, Johnston's attention and energy had been diverted as the South turned to secession and war.

Johnston had been only incidentally interested in politics prior to 1861. By conviction and practice a Union Whig—but always an ardent supporter of Southern rights, the events of the late 1850s and the election of Abraham Lincoln caused him to embrace secessionism. He received the unanimous vote of the Mecklenburg County electorate as a delegate to the Secession Convention. After his vigorous support of the secession ordinance, hoping that withdrawal could be accomplished peacefully, Johnston's most notable action in the convention was successful sponsorship of a measure to relieve Jews of political disabilities under the constitution of 1835. When he learned that Jews were volunteering in Mecklenburg military units, his sense of justice required that he promote citizenship for this patriotic minority.

At the insistence of Governor John W. Ellis, Johnston, after resigning from the convention, reluctantly became commissary general of North Carolina with the rank of colonel. He served with distinction as the state prepared for war but resigned in the fall of 1861, believing that his direct management of his railroads would result in a more significant contribution to the Confederate cause. Upon the death of Ellis in 1862, Johnston—the candidate of the original Secessionists who had become hard-core Davis supporters—contested the governorship with Zebulon B. Vance, popular former Whig congressman and Unionist. Neither man canvassed the state, but the election elicited a vigorous newspaper response. Eleven journals supported Johnston and ten, Vance. The Johnston press denounced the youthful Vance as "anti-administration" and as the "Yankee" candidate; the Raleigh Register, a Confederate party organ, warned that his election would be construed "as an indispensable sign that the Union sentiment is in the ascendancy in the heart of the Southern Confederacy." Vance replied that he favored prosecution of the war "at all hazards and to the utmost extremity so long as the foot of an invader pressed the Southern soil." Colonel Vance, still commanding the Twenty-sixth North Carolina Regiment in Virginia, won an overwhelming victory. He carried 68 of the 80 counties and was elected by a vote of 54,423 to 20,448. The outcome of the election was not an accurate measure of Johnston's public repute, but rather reflected the unpopularity of the Confederate party and the public confidence and approbation enjoyed by Vance.

Despite his humiliating defeat, Johnston responded with characteristic efficiency and devotion to duty. He worked diligently to keep the Charlotte and South Carolina Railroad open as a means of transporting men and supplies vital to the Confederacy. By 1863 he had completed the forty-six mile link from Charlotte to Statesville in the ambitious plans of the Atlantic, Tennessee, and Ohio; but, as the plight of the Confederacy became desperate, he permitted that road to be cannibalized so that other routes could be kept operable. (He considered his work so important that in 1864 he declined President Davis's request that he become commissary general of Confederate armies.) When Wilmington, the last port on the East Coast open to blockade-runners, fell early in 1865, Johnston proposed to build a railroad from Augusta to Columbia in order to improve and shorten interior lines between the beleaguered armies of Robert E. Lee and Joseph E. Johnston. Although he raised one million dollars in Confederate script for the project, it was too late—the days of the Confederate States of America were numbered. In February 1865, William T. Sherman's advancing armies destroyed 60 of the 110 miles of track belonging to the Columbia and South Carolina. Bridges, depots, shops, and rolling stock as well as about one thousand bales of company cotton were burned or confiscated. Johnston succeeded in saving an additional one thousand bales of cotton, which was the company's only tangible asset.

Whereas historians have generally assumed that the federal government rebuilt many miles of devastated southern railroads during Reconstruction, the expenditures on behalf of the Charlotte and South Carolina were negligible. Undeterred, the energetic Johnston undertook what seemed an impossible task. With approximately $170,000 from the sale of cotton as company capital, he sought private subscriptions to rebuild a railroad through a devastated, pauperized countryside. In part, confidence in Johnston himself caused a favorable public response. In 1866, the road from Charlotte to Columbia reopened; and, despite the determined opposition of the monopolistic South Carolina Railroad Company, he also built the eighty-five mile Columbia to Augusta line at a cost of two million dollars in greenbacks, all secured by public subscription. The two lines merged to form the Charlotte, Columbia, and Augusta Railroad. In June 1871 the rebuilt railroad from Charlotte to Statesville reopened, again largely due to Johnston's efforts. No other man in the South had built or rebuilt more railroad mileage with private financing.

In 1873, Johnston retired from railroad management and turned his attention to his extensive personal and business interests in and near Charlotte. A charter member of the Commercial National Bank of Charlotte, he was frequently an adviser or director of other important financial and industrial enterprises. He served four terms as mayor of Charlotte (1875, 1876, 1877, and 1885) and, untrammeled by partisan considerations, promoted community advancement without regard to party. He was an unsuccessful congressional candidate in several elections, probably because his aggressive manner and reserved demeanor generated some enemies and more respect than popularity among his advocates.

Samuel A. Ashe, ed., Biographical History of North Carolina, vol. 1 (1905), and Cyclopedia of Eminent and Representative Men of the Carolinas of the Nineteenth Century, vol. 2 (1892).