See also:
Our State Geography in a Snap: The Mountain Region
Extended entry on the Mountains (from the Encyclopedia of North Carolina)

Cities or towns with NCpedia entries in the Mountain region: Asheville 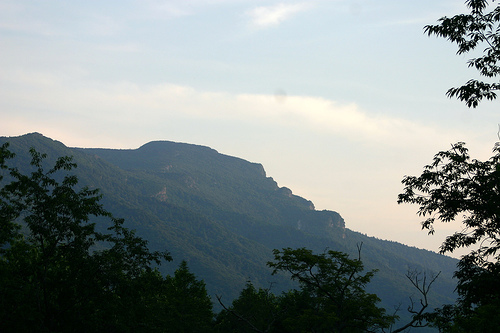 The Piedmont ends and the Appalachian Mountains begin abruptly at a major fault line, the Brevard Fault, west of which rises a steep escarpment, the edge of the Blue Ridge mountains.  That escarpment rises as much as 1,500 feet above the adjacent land, clearly visible at places such as where I-77 crosses into Virginia and rises quickly to pass through Fancy Gap in the Blue Ridge Mountains.  It is visible also in the Swannanoa Gap, where I-40 crosses the Blue Ridge mountains and enters into the Asheville Basin.  The Blue Ridge Mountains form the eastern continental divide, with waters draining off its western slopes into the Mississippi River system and those from the eastern slopes flowing into the Atlantic Ocean.  Rivers that originate, at least in part,  on the eastern flanks of the Blue Ridge in North Carolina include the Roanoke, Yadkin, Catawba, Broad and Savannah Rivers.  The major westward flowing rivers are the New, French Broad, Little Tennessee and Hiawassee.  The New River, despite its name, is very old, as indicated by the fact that its winding course has maintained itself despite flowing across hills and valleys.  It is believed that this happened because at one time the river flowed over a plain that developed into mountains as the land was uplifted and erosion wore away the soft rocks faster than the harder ones.  The strong flow of the New cut through both hard and soft rocks, thus maintaining its original valley.

The Appalachian mountain system reaches its greatest width and elevation in North Carolina.  The Blue Ridge Mountains are the eastern edge of a highly dissected mountain plateau.  This plateau is bounded on the west by the Unaka and Great Smoky Mountains, along the Tennessee border.  In between are a number of cross ridges and broad intermontane valleys.  Most prominent of these cross ridges are the Black Mountains, which include Mount Mitchell, at 6,684 feet the highest peak in the eastern United States.  Other cross ridges are the Pisgah, New Found, Balsam, Cowee, Nantahala, Snowbird and the Valley River Mountains.  Altogether, in North Carolina there are 43 peaks that exceed 6,000 feet in elevation and another 82 that range between 5,000 and 6,000 feet.

The mountains of North Carolina are made up of a variety of rock types but the predominant type is a mass of metamorphic rocks.  Metamorphic rocks (Greek for “changed form”) are pre-existing rocks of any type that have been changed by heat and pressure but not so much that their original character is not discernible.  Limestone became marble, for example.  Usually the result was to create a rock that is  relatively resistant to erosion.  Associated with metamorphism has been faulting and the intrusion of molten (igneous) rocks into the area.  Rocks in the mountains range in age from over one billion years to about 400 million years.  The western part of the mountains contain the oldest rocks in North Carolina and they are separated from slightly younger rocks in the eastern mountains by several fault zones.  The older rocks are referred to as basementrocks.  They were mostly igneous in origin, prior to metamorphism, and they comprise a remnant of the original mass of ancient North America.

In the eastern mountains the rocks are somewhat younger mixed volcanic and sedimentary rocks that were deposited on the continental margin and subsequently metamorphosed during the episodes of mountain building.  These rocks make up the main mass of features such as Mount Rogers and Grandfather mountain.  Intermontane basins, especially the Asheville Basin, at the confluence of the French Broad and Swannanoa Rivers, have provided most of the level land on which people have settled in this region.

Very useful information for my State Project. Thanks!

We are so glad NCpedia could

We are so glad NCpedia could help you and thank you for letting us know!

Doing project for school and

Doing project for school and this site is very helpful. (: